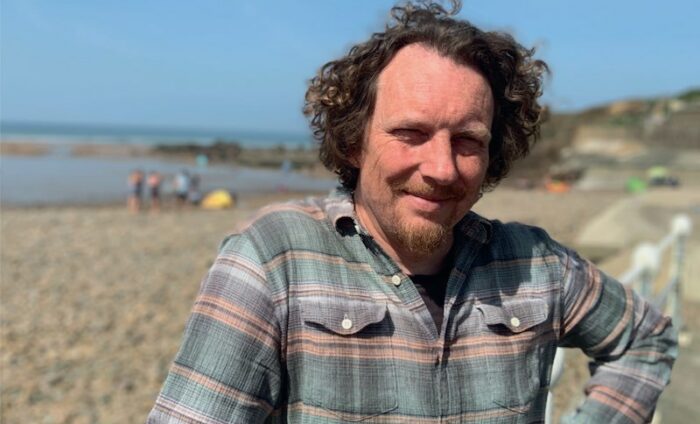 “We might as well go and sit on the beach if we are going to talk about it,” says Martin Dorey walking towards a bench overlooking Crooklets Beach. I am clutching two cups of hot tea, Martin has just come out of the surf and I have just swum at Bude Sea Pool. It is still cool in the water and the tea is very much needed.

If you haven’t heard of Martin Dorey, you might have heard about his movement the #2minutebeachclean. If you haven’t joined in while visiting the coast, then it is about time you did. There are now 550 beach clean stations at locations across the UK and in some parts of Europe, with everything you need to take a moment and litter pick from the beach. The stations provide bags and a picker, but all you really need is the inclination to do your bit in the first place. “Human nature is to be lazy, I am lazy,” says Martin. “If something can be done in two minutes, I will do it. If you can do something in two minutes and to be told you have done enough, that has power.”

Despite growing up in landlocked Buckinghamshire, Martin has always beach cleaned and always surfed. As soon as he was old enough to drive, he took his passion for skateboarding to the coast to surf, driving to Bantham in South Devon to learn. “I eventually moved to North Devon in 2007, a place called Peppercombe Bay,” says Martin. “I was walking at the beach and found myself knee-deep in plastic. I grabbed a bagful, but I was fuming. I decided I had to do something about it. I set up a beach bottle project, this idea that surfers would pick up a bottle for every wave. Some guys got involved and we developed a website and beach cleaning network. It was a way to connect volunteer beach cleaners, we were the first people to do that, it worked really well.”

The beginnings of such a big network had started, but it wasn’t until 2013/14 after a brutal winter that brought a number of big North Atlantic storms to the UK leaving the beaches strewn with plastics that #2minutebeachclean was born. “That winter was awful here,” says Martin. He now lives in Bude and Crooklets Beach is where he surfs. He points to a part of the prom we are sat near. “There used to be a row of beach huts on that level there, they were completely smashed up and the contents strewn across the beach – it was horrendous. I started to clean up. I did a bit, would take a bag of rubbish off the beach and then come back and fill another. I did a little bit as often as I could. I had quite a lot of followers on social media so I thought I would get them involved. I had done two minutes and picked up a lot in no time. So I posted that and then posted that every day – that was it, people started doing it as well. I figured if one other person did it, it would double my efforts and be four minutes, six minutes… etc.”

As #2minutebeachclean took off, fellow Bude Eco Hero Deb Rosser suggested creating a beach cleaning station with pickers and bags. Deb had been cleaning the beach at Crooklets for years and she counted everything she took off the beach. “We trialled the beach clean station for a year and then had seven more put out across this bit of coastline,” says Martin. “We looked at the data Deb had collected the year before we put out the beach clean station and there was a 61% drop in litter on this beach alone. It gives out over 1,000 bags a season.”

I look around the ground ahead and below me, it is spotless. It is a great reminder that you can make a difference. “Yes you can make a difference because you keep chipping away at it, it really does matter and the act of doing it will inspire others to do it,” says Martin. “From my first hashtag on this beach in 2013, on Instagram alone there are now 110,000 #2minutebeachclean tags from every continent. It isn’t me on my own anymore. We create the ripples, if you convince one person to give up plastic bottles, they might convince another. Bude is amazing, because everyone does it, it is a way of life, an attitude and a normal thing to pick up litter.”

The movement isn’t going to stop at the coast either, there is now #2minutelitterpick and #2minutestreetclean and the team are working with councils inland to put cleaning stations in their open spaces. There is work to trial new reusable bags at the cleaning stations to eliminate plastic. The bags will be made from old coats and produced by clothing company Patagonia. The organisation is turning into a charity and there will be more effort to get more stations on beaches, inspiring people to help out. Meanwhile Martin has two new books out this summer, including a book for kids: Kids Fight Plastic which features #2minutesuperheroes.
So what about us, what can we do? “Try to live plastic clever,” says Martin. “Plastic free is very difficult, even for someone who is really conscious like me. Going to the supermarket is infuriating! But you can be plastic clever. Eat local, fresh, seasonal, sustainable and try to grow your own fruit and veg. It is a financial as well as emotional commitment, but you can try. Cut down single use plastics and consider your consumption. Overall it is better for you. Better for your head, your life, health and for the local people.”

Lavington School pupils set their sights on the English Channel