Open water swimmers – and especially cold water swimmers – are often described as brave. We try to avoid using the word at H2Open as we feel it does a disservice to both our sport and the concept of bravery. The majority of swimming we do doesn’t require courage. We do it for fun and fitness, not to overcome fears. Describing swimmers as brave implies that what we do is more difficult than it really is. Perhaps it even puts people off trying.
When we take on big swimming challenges then it’s natural to feel some anxiety and the level of anxiety will increase as the risk that the swim can’t be completed goes up. The way to deal with this though is to improve our training and preparation to improve our chances of success, not to be recklessly brave and attempt to swim anyway. Even if there is a risk of failure we should be confident that we can complete the swim, or that if something happens that prevents us from finishing then proper precautions are in place to ensure our safety. If we do that then what need is there for courage?
Confidence is not the same bravery. When there is little at risk, there is little call for bravery. But there are times when swimmers need courage.
Last week I was in Tunisia where I was invited by Nejib Belhedi to observe his attempt to swim 18km in cold water while towing a boat. Most swimmers operate under the radar. They share their swims only with close friends and other swimmers, often only announcing a success after they’ve achieved it. They go about their swims privately, without expectation of or desire for public recognition.
Not Nejib. His attempt was a very public affair. He worked hard to secure multiple sponsorships and the support of government, the civil guard and the military. He invited newspaper and television journalists to witness his swim, which he described as an “Iron Swim”. Publicity was in fact essential as Nejib wants to inspire a generation of Tunisians to seek out positive challenges in their life.
And the swim wasn’t going well.
The water was colder, the wind was stronger and the water more choppy than expected. Nejib was struggling but with Tunisia’s media circling him like sharks and with cameras monitoring every breath the pressure to continue must have been enormous.
We normally see giving up as a bad thing. We give up, allegedly, because we’re mentally weak and we don’t have the will to continue. But it’s not always like this. Giving up can be a really hard decision. You think of all the effort you’ve put in to get to where you are, you think of all your supporters and all the people you told about the swim. The swim might be hard, your shoulders ache and the cold is eating into you but you know that’s all temporary. Swimmers (a lot of them anyway) are really good at pushing through pain and discomfort – and sometimes they’d rather do that than admit they’ve taken on a challenge that’s beyond them. And that can be dangerous. There is a skill in recognising when it’s not your day, and then having the courage to admit it.
Nejib announced his decision simply. Three and half hours into his swim he said, “I think I will give up.” He touched the boat and the swim was over. It was the right decision taken at the right time but it wasn’t easy. Sometimes we praise swimmers for their bravery when they swim past the point they can make sensible decisions for themselves but perhaps the real courage is being able to admit when you’ve failed.
Something to think about next time you swim anyway.
Image: Nejib struggles against the conditions 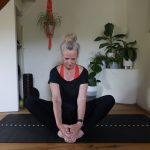 Move of the month: butterfly stretch