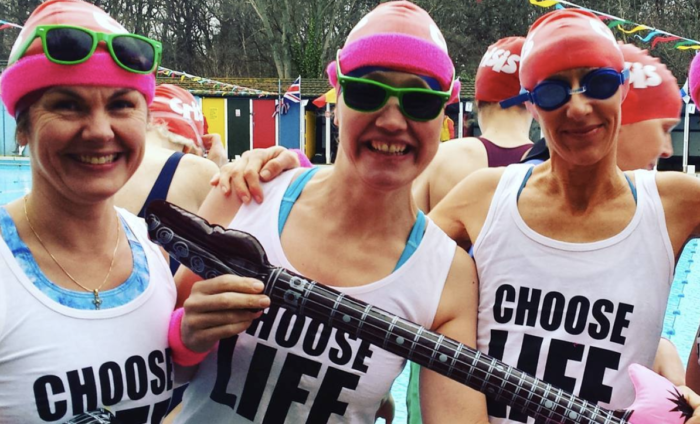 At Outdoor Swimmer we like to practise what we preach and join events when we can. If this means stripping off and plunging into cold water in the name of journalism, so be it. We don’t always get things right, but last weekend was the Cold Water Championships at Tooting Bec Lido and I came away with a medal after joining a team from Open Water Swimming Clubs – so I thought I’d share a few tips based on the experience.

1 Join a team
Getting into cold water is hard. Your instincts are yelling at you to run the other way, fast. If you’ve signed up for a relay there’s a good chance your teammates will throw you in if you don’t go voluntarily. It helps steel the resolve. The other good thing about relays is that you usually only have to swim 30m rather than the 60m for a solo swim. There’s also something special about winning a team medal, even if we pretend that it’s just about taking part and having fun.

2 Get in smoothly, purposefully and with commitment
If you try to ease yourself in gently, there’s a good chance you will fail. Testing the water with your hands, feet or legs will only confirm how much it’s going to hurt and you’ll most likely stop. Lower yourself over the side and immerse your body up to your shoulders in one smooth movement. For a second or two, your body won’t even know what you’ve done to it and hopefully by that time the start signal will have sounded and you’ll be on your way. At the same time, don’t jump or dive in. Cold water shock will cause you to take a sharp breath. Best if that doesn’t happen when your mouth is under water.

3 Bring flip flops or similar
Is any explanation needed? Lots of people were walking around barefoot at Tooting Bec on Saturday. It didn’t look very comfortable. And bring loads of warm clothes and layers for when you’re waiting around outside.

4 Forget any pre-held notions of decency and body space
At Tooting Bec on Saturday the sauna was more crowded than the Underground at rush hour and the hot tubs had people packed in more tightly than fish in barrels – and nobody was wearing anything except their swimming costumes. Luckily everyone was in a better mood than they would be for their daily commutes.

5 Acclimatisation is over-rated
It doesn’t seem to matter whether you’re a first-timer or a serial offender. Cold water is still cold and still painful. I met several first timers who managed just fine, so if you haven’t had a chance to acclimatise, don’t panic. Cold water shock is an issue, but being mentally prepared for it should be enough to get you through a quick 30m dash – but leave the longer stuff until you have more experience.

6 Expect eccentrics
Maybe disrobing in public and plunging into cold water is disinhibiting. At a cold water event, expect to see people in weird fancy dress and wearing bizarre contraptions on their heads. They call them hats, but they’re not. You might also catch people spontaneously singing and dancing, and making up songs with dodgy lyrics. Join in.

7 Bring as many costumes as you have races
Obvious really, but surprising how many people only seem to have one costume. If you’ve entered more than one race, most likely you will have to wait around between them. You’ll be much more comfortable getting changed and putting on a dry costume than hanging around in a cold damp one. Bring an extra in case you make it into a final (see below).

8 Make a day out of it
Our team took just under one minute 15 seconds to complete four widths, which meant each of us were in the water for about 20 seconds. Agreed, it’s a very intense 20 seconds, but it’s a very small portion of the day. Don’t just turn up, race and go home again. Hang around to watch the other races, marvel at the crazy hats and enjoy being part of something on the wild side.

9 Indulge your inner child
One amazing thing that characterises cold water events is people of all ages (except perhaps very young children) having fun. Hat makers let their imaginations run wild and nobody cares what clothes you wear. Relax and go with the flow.

10 Respect your fellow swimmers
Interestingly, while having fun seems to be the key requirement, the moment of entering the water is taken very seriously. Swimmers don’t squeal or shriek or giggle or faff around getting in; there’s no backing out once committed. The reason: it wouldn’t be fair to your competitors to keep them waiting in the water.

11 Don’t use the word ‘brave’
Newspaper reports on cold water swimming events frequently use the word ‘brave’ to describe the participants. I think it devalues the word, which should be reserved for acts of facing up to real dangers. Yes, it takes a bit of steely determination and, yes, it’s a bit of shock to your body, but I think ‘brave’ is overdoing slightly.

12 Body shape doesn’t matter
Carrying a little extra padding is often considered an advantage in open water swimming – but that’s to do with cold tolerance over extended periods of time in more moderate conditions. It does nothing to prevent cold water shock or desensitise the skin to cold. As long as you’re just doing a brief sprint even the most slender swimmers will have little to fear from hypothermia – just be sure to keep wrapped up warmly before and after.

Arena brings its Carbon Powerskin technology to the wetsuit market