One year late – because of Covid – plus the 17 hours and 18 minutes it took to swim across, and an intrepid group of five Channel relay swimmers are among the latest to complete this mammoth feat.

Taking turns of swimming an hour at a time, braving force 5 winds, and coping with seasickness, the team taking part in aid of swim charity SwimTayka can now add their names to the history books of cross-Channel relay swimmers.

SwimTayka, which runs programmes in developing countries around the world, teaching children to swim, made the arrangements for the swim, which had been postponed from 2020. But it was the five swimmers who had the hard task of putting in hours of training to complete the England to France crossing.

First in the water was project manager Charlene Gibberd, who lives near Eastbourne. She swam to the shore, cleared the water, and then got back in to officially start the swim.

“My first swim wasn’t too bad because within Dover harbour the water was relatively calm,” she said. “The second was the most choppy and the waves were really battering me about. You’d put your arm out to reach for the water, and it would be gone, and then you’d get a heavy wave crashing on top of you. My third hour was the best and exactly as I’d hoped – calmer seas, the sun was shining and the water was clear.”

Charlene also had to complete a fourth, full hour, which she found the hardest. “There was such a strong tide it just wasn’t letting us get into France, so I had to swim really hard.”

Next to swim was the only male team member, Shiva Murthy, an engineer based in the US, who’s completed Ironman triathlons and wanted to try an endurance swim too.

Then came Julia Maguire, a lawyer from Bromley, followed by Pam Carefull.

Pam said: “We had, I think, noticed the boat rocking but boy did I get a shock in the water. The water was coming at me thick and fast, all thoughts of what I might keep my brain occupied with for an hour gone as I tried to get into a rhythm.

“But I had to keep going, I’m sure my swimming looked terrible – it felt terrible but I tried to swim the waves like skiing bumps – it was great when I breathed at the top but more often than not I got a mouthful of salt water.”

Last but not least was Becky Reddish, from southwest Oxfordshire, who works in mental health. For someone who, until the age of 40, was a non-swimmer, to take part in the Channel relay was a real achievement.

“It was awful going last. I had four hours to build myself up into an absolute state, especially as I knew I was going into very rough sea. When I got in it was brutal, I was battered and battered.”

Becky’s second swim wasn’t great either, as she’d managed to keep so little food down, her energy levels were low and the cold began to get to her. But her third and final swim went well.

It fell to Julia to swim the last stretch – and it was the swim of her life!

Julia, also a Trustee of SwimTayka, was a late addition to the team, having stepped in when another swimmer was forced to pull out due to injury.

Julia had recently taken part in a Channel swim, so was well prepared, but the events couldn’t have been more different. Whereas her first swim was on flat water taking just over 14 hours, this time the word ‘rough’ just didn’t cut it!

“When we got near to France, less than a kilometre away, we were stuck in an eddy current. Eddie Spelling the pilot took me aside and he said ‘young lady, if you can’t swim hard enough, you’ll be washed out to see and the swim will be aborted, so you have to go flat out’, and I thought no pressure!”

What’s the team’s main piece of advice for anyone thinking of a Channel swim. Julia said: “Train for the cold because it is much colder than you imagine it will be.”

Becky echoes this. “Don’t just swim in a lake and think you can swim the Channel. You have to prepare for the cold and the more training you get in the sea, the better prepared you will be.”

If you are tempted to swim the Channel as a relay, then SwimTayka is holding an assessment day on September 4 at Dover Harbour. For more information, visit https://swimtayka.org/event/channelrelay/?event_date=2021-09-11 or email Bryan@swimtayka.org. 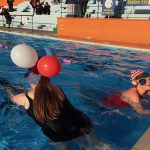 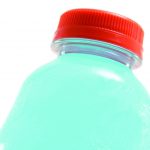