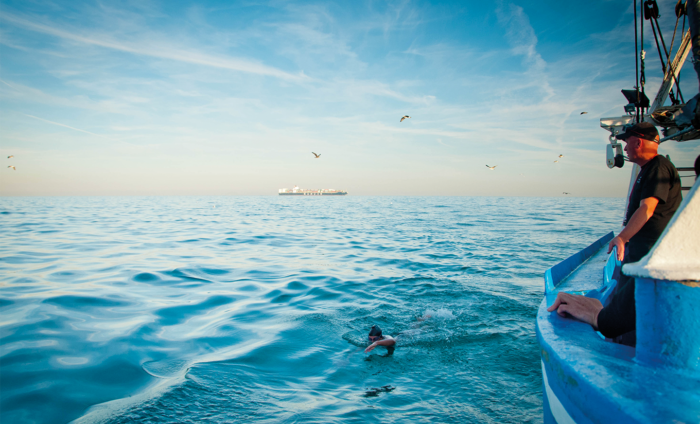 It is hypocritical to condemn elite open water swimmers seeking exemptions to travel to swim this year, while embracing other sportspeople who are doing the same, argues Luke Chamberlain

Facebook, typically a platform for level-headed and sensible discussion, where great minds congregate to debate topical affairs, is today witnessing a heated debate among the outdoor swimming community: should ultra-marathon swimmer Chloë McCardel, an athlete on the brink of achieving a remarkable world record for completing the most crossings of the English Channel, be granted an exemption by the Australian government to travel to the UK this summer?

Considering elite sportspeople have been allowed to travel since as early as June last year, the answer to this question for many would be obvious: Why not? She’s an athlete; athletes are allowed to travel. However, some members of the outdoor swimming community have taken a different viewpoint. “It seems a bit self-indulgent,” wrote one user on Chloë’s Facebook. “This is just selfish,” wrote another.

Personally, I think it’s bizarre to belittle Chloë McCardel’s ambitions as trivial – particularly considering she has dedicated her life to the sport and has no doubt inspired a generation of young swimmers. I wonder if the same people would consider Serena Williams taking part in the Australian Open this week “a bit self-indulgent”? I’m not so sure.

We have all felt the devastating impact of the coronavirus pandemic – tragically, some of us more so than others. It has been a time where we have all questioned the actions of those around us and have taken the impact of other people’s decisions personally. To those who are questioning Chloë’s plans to travel to the UK based on the risk it might bring to loved ones, I can understand their concern.

However, those who have expressed the view, “If I can’t travel, then why should she”, I find harder to empathise with. Unfortunately, you’re not an elite sportsperson. I enjoy a good kick-about in the park, but I’m not moaning about professional footballers travelling to play matches. I’m sure many people complaining also probably still tune in to watch sporting events that are taking place across the world. How is Chloë McCardel any different to these sportspeople? If footballers qualify for travel exemptions – based on their sporting ability – then should swimmers not be allowed to travel too?

I can concede that footballers and tennis players are chosen to take part in events and competitions, whereas Chloë is choosing to attempt the record. But for me that’s a weak argument. The only reason that bigger sports like football and tennis are allowed to continue while others are not, is because of their financial influence. Relative to the Premier League, the potential risks associated with a handful of swimmers travelling to break world records is tiny. There should be a point where we draw the line; not every swimmer should be allowed to travel. But to not allow one athlete to achieve a world record, while thousands of others can continue travelling, for lesser potential sporting gain, I believe is wrong. FINA, the International Swimming Federation, are also scheduled to launch this year’s Marathon Swim World Series on 13 March. Why should these athletes be allowed to compete, if Chloë cannot?

Many people have also complained that it is currently not safe to travel to the UK. Travellers from ‘hotspots’ are currently being made to quarantine in hotels for two weeks. The thing is, no one is swimming the Channel until at least June anyway. By the time the water temperature in the Channel is warm enough to facilitate crossings, UK restrictions will no doubt have been substantially eased – as was the case last year. The same people lambasting Chloë on Facebook will perhaps even be packing their suitcases for a fortnight in the Canary Islands this summer; if that’s you, bring your binoculars, you might be able to catch a glimpse of her pilot boat from your window seat.

In the current climate, Chloë McCardel and other elite open water swimmers are, as one Facebook user wrote: “beacons of hope, hard work, commitment and determination, who’s endeavours are a shining example of what we can achieve when we work for it.” I have to agree. Let her swim!

Can you help Swimathon reach £50m?