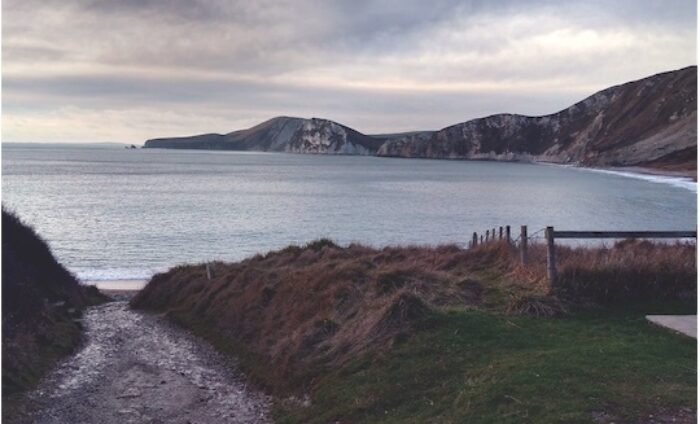 It was rather an impulsive

at the tail end of last summer:

“I’m going to swim in the sea every month of the year”. My wife and I had just had an impromptu swim from beautiful Studland beach, in Dorset. Caroline was immediately game too for what seemed like a faintly ridiculous dare. To many hardened, open water swimmers, this year-round challenge won’t sound arduous in the least. But though we loved being in the sea, we had only swum during the ‘conventional’ months – June to September – at our local beaches. And we intended on completing the challenge without wetsuits.

We live in mid-Dorset, within half

an hour of many truly stunning swim

locations. With so many tempting and

iconic swim spots, why, we mused, had

it taken us this long to hit on the idea

We told friends of our challenge for the coming year – to a mostly favourable reaction. Some even wanted to join us, so later that evening A.R.S.E. was born: the Adult Recreational Swimming Ensemble. You see, it’s all about the fun of it – we’re not overly athletic or competitive types out to smash PBs or swim the Channel, but we aim to enjoy our local waters with kindred spirits, having a laugh along the way.

All this was five months ago and

our challenge is still going strong.

Our first dip in February was an

and children in tow, we set off from

the ghost village of Tyneham hidden

in the folds of the Purbecks to walk

the mile to Worbarrow Bay. Public

weekends and August since it is MoD

Office requisitioned the area for

firing training. It was meant to be a

were never allowed to return and now

the village cottages and Post Office and school lie in semi-ruin, albeit with quirky charm.

The bay is perfect for swimming

– its wide curve is bookended by the hunk of rock that is Worbarrow Tout, which provides a natural nook and

This cold, grey February day showed signs of relenting, and sunshine teased the rippling sea – it was definitely looking inviting. We lit a fire on the pebbles, both for warming post-swim bodies and homemade soup. Friends were left in charge of the fire and children, as well as a timer set for 20 minutes. As socks, gloves and skin swimmers, we know our limits and 20 minutes is about right for us in 8°C water.

The bay is perfect for swimming – its wide curve is bookended by the hunk of rock that is Worbarrow Tout, which provides a natural nook and generally means calm waters.

There are many things I love about

on my skin after the initial shock has worn off – and also the euphoria after. I love that disconcerting feeling, of reminding yourself that it’s not August – but that, actually, it doesn’t matter, because it’s so pleasurable just swimming. I love seeing the coastline from a different perspective. Yes, it would be a similar view from a boat, but swimming offers a connectedness to the surroundings – you feel part of it, enveloped in water, senses heightened.

And what a view there is here,

formed up to 145 million years ago.

Layers of limestone, sandstones and

chalk bear testimony to the Cretaceous

period and later when the African

and European plates collided to form

the folded strata of the headland.

round to the chalk cove of Arish

stunning. We agree these are places

we will swim to and explore when the

water warms later in the year.

On with our challenge which, as

you have probably gathered, is proving

to be entirely enjoyable and not a bit

offers such wonderful opportunities for

swimming and adventure, this year-long endeavour may just have morphed

into a lifetime passion.

Email your favourite wild swimming spot to: editor@outdoorswimmer.com with the subject ‘Wild Swimming’