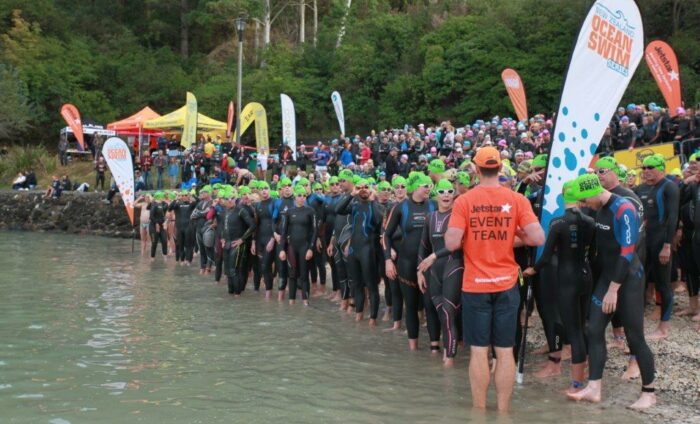 Last year Webby was the source of some controversy when she was denied a ticket to Rio by New Zealand’s selection team despite being offered a place in the Olympic marathon swim as Oceania’s top representative following her performance in the FINA selection race in Setubal.

Her victory in the 3.3km Christchurch Crown at the weekend, in a time of 41:09, was only the second time in the 12-year history of the series that a woman has finished first overall. Quinton Hurley, the first man home, finished in 41:27.

New Zealand Ocean Swim Series, Event Director Scott Rice, says: “It was a class act. In amazing form, she was comfortably leading the majority of the race and managed to beat out the young boys.”

Her victory in the 3.3km Christchurch Crown at the weekend was only the second time in the 12-year history of the series that a woman has finished first overall.

In addition to the elite race, more than 700 regular swimmers took part in the mass participation event. Other distances in the Christchurch Crown event included the 500m ‘Give it a Go’, the 1km ‘Step it Up’, and the 200m Banana Boat OceanKids event.

“It was a great day. We had fine, calm weather. All the swimmers in the 3.3km ‘I’m Going Long’ swim were super-fast and finished well inside of the cut off times. The Banana Boat OceanKids event was awesome. It was great to see so many smiling kids,” says Rice.

There are two remaining events left this season in the New Zealand Ocean Swim Series, including the Bay of Islands Classic (18 March, Paihia) and King of the Bays (8 April, Auckland).

The New Zealand Ocean Swim Series caters for swimmers of all skill sets and ages, offering an opportunity for recreational swimmers to test themselves over the same course as New Zealand’s elites.