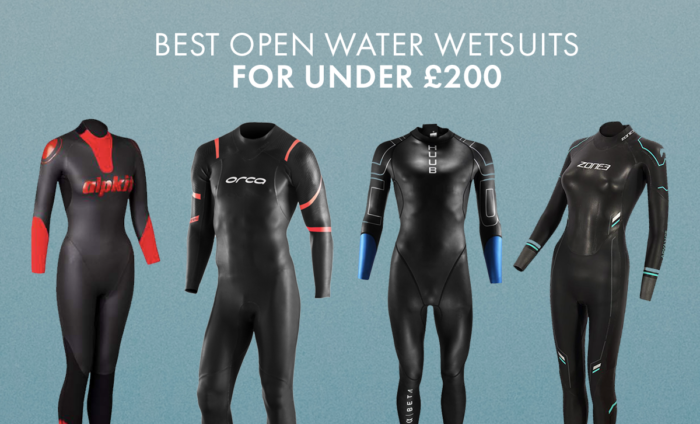 There are a few reasons why you might want to wear a wetsuit. Their primary purpose is to keep you warmer, which can help you stay comfortable in the water for longer and reduces your risk of hypothermia. Wetsuits are also buoyant and will stop you from sinking. If you need a rest when wearing a wetsuit, you can just roll onto your back and relax. Moreover, a wetsuit gives you some physical protection against cuts and scratches when swimming in natural water environments, where you might bump into sticks or stones, which can be reassuring. For these reasons, some venues and events even insist that you wear one.

Here are some of our top recommendations for wetsuits under £200 in 2021.

Orca’s TRN Core Openwater wetsuit is targeted at swimmers who are just starting out in open water swimming. It has great flexibility around the shoulders, which makes for a comfortable swimming experience.

It is a neutral buoyancy suit, which is particularly suited to female swimmers who many find that wetsuits with more buoyancy around the hips and legs lifts their feet too high in the water. It is also well suited for breaststroke swimmers as it allows your legs to sit lower in the water.

Designed to withstand the rigours of adventure swimming, the Lotic offers a good balance between flexibility, warmth and toughness. It uses Glideskin neoprene varying between 1.5mm thick across the shoulders to 4mm across the chest and back to protect your core. The abrasion resistant nylon-faced neoprene on the lower leg protects against damage when scrambling in or out of the water.

Designed for swimmers wanting to spend longer in cold water, the thermal Silvertip from Alpkit has a “thermo stretch lining” throughout, except for the lower leg panels (which makes the suit easier to get in and out of). Some suits compromise flexibility for warmth. This doesn’t. It glides through the water and I kept toasty warm in the snow melt of Loch Morlich. Other useful features include abrasion resistant nylon on high-wear points and an internal pouch

Sleeveless wetsuits are best suited to warmer conditions for obvious reasons. We loved the freedom of movement around the shoulders along with the feeling of water against our arms. A good compromise, and

A decent entry level wetsuit for light summer dips. Flexible enough to give you good freedom of movement for light swimming. Some people have said the suit is particularly susceptible to damage. Better value for money options available.

The Advance is one of Zone 3’s cheapest wetsuits and a great entry level suit for the price. In the water, it feels balanced with the right levels of buoyancy in the right places, it copes well in cooler water, is well made and should last you several seasons. Perfect for training and

As one of the cheapest entry level open water swimming wetsuits on the market, Huub’s Alpha-beta suit is well worth considering. Although it lacks some of the features found on Huub’s high-end suits, the Alpha does well on flexibility, with its 1.5mm thick neoprene under the arms, and body position in the water feels good.

Although at the pricier end of “entry level”, the Sprint from Blueseventy is worth a look if you want something that will serve you well in a race, as well as be a comfortable, all-round suit. We liked the stretchy under-arm panels for good shoulder mobility and the collar, which felt secure without excess pressure on the throat.