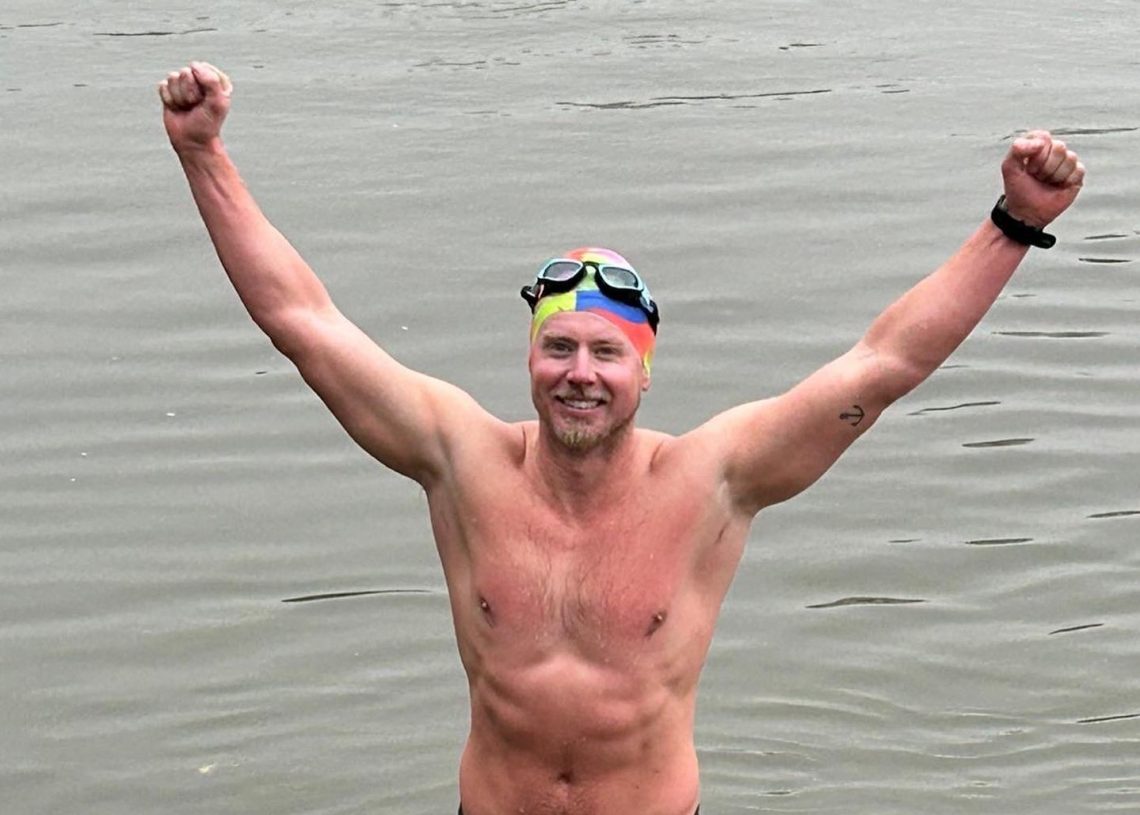 Twickenham resident and Thames ferry captain Andy Spencer has completed his swimming challenge – to swim a mile a day in the River Thames for a year – in memory of his late father Francis.

‘Captain’ Francis Spencer ran Hammertons Ferry – a pedestrian and cycle ferry service across the River Thames alongside his wife, Jenny. They passed the business down to Andy in 2018.

After Francis passed away from cancer in November 2020, Andy decided to undertake a year-long swimming challenge to help him come to terms with his grief while fundraising for Macmillan Cancer Support.

Andy, a novice swimmer, did his first mile in the River Thames on the first anniversary of his father’s death. His final swim was on 29 November 2022, watched on by his mother Jenny who has been supporting his challenge every step of the way.

Andy has raised £62,000 for Macmillan Cancer Support, far exceeding his initial target of £10,000. His fundraising is in recognition of the support he received while caring for his dad. “I wanted to do something to give back to all the families who have suffered the impact of cancer,” says Andy.

Now he’s had time to recover from his challenge, we’ve pulled Andy up for a chat about his incredible achievement.

Andy, you completed your swim challenge a few weeks ago now. How are you feeling after such an amazing feat?

I had mixed emotions when I finished. I definitely felt a little down and lost for a few days. I went to Scotland for a little road trip – just me and my dog to get some quiet time. I cut the trip short as I felt it would be good for me to be around people and not isolate myself. Once I got back I got so much love from people. It was overwhelming!

Where was your final swim?

It was in my home stretch of the Thames, where most of my swims were. It was just me, with my mum watching. Nice and early – how I always did it. And I really went for it!

On the 27th November we had a fundraiser down at Hammertons, where I did a night swim. It was an open invite for supporters to see me swimming as I knew the last day was a Tuesday and most people would be working. I couldn’t believe the turn out. About 100 people showed up! It was truly overwhelming to have all those people cheering my name during one of my last swims.

How was it transitioning into the winter months of your swim challenge after such a hot summer?

It was a shock to the body but I soon got used to it and it got easier as time went on. Most of my swims were before sunrise, just so it was done and I didn’t have to think about it for the rest of the day.

What’s the reaction been to your swim challenge?

The public reaction has been fantastic! We had two fundraisers, including a cake sale where so many local cafes donated cakes. It was a complete success. The turn outs were incredible.

Friends and family have made my journey so much easier and they”ve supported me the whole way through. I can’t thank everyone enough.

Are there any highlights that stand out from your year of swimming?

I have so many great memories to look back on. The amount of strangers who reached out and wanted to swim with me was so nice. I met so many positive people on my journey.

My favourite swims were when the sun was just coming up and it felt like I was in paradise.

And what were the most difficult moments for you?

I had a lot of mental battles but I knew I had one goal, and that was to complete my 365 swims.

I accidentally bumped into things on a regular basis, including logs and boats on the wrong side of the river. I even had a sculling boat run into me and I got entangled around the rigging. That was the scariest swim for sure.

Do you have any more swimming adventures lined up?

Nothing planned as of yet but I’m sure something will pop into my head soon. Swimming is my happy and safe place.

Andy’s fundraising page for his swim challenge is still open for donations. Proceeds will go to Macmillan Cancer Support in recognition of the support Andy received while caring for his dad. Read about more open water swimming challenges via our news page.