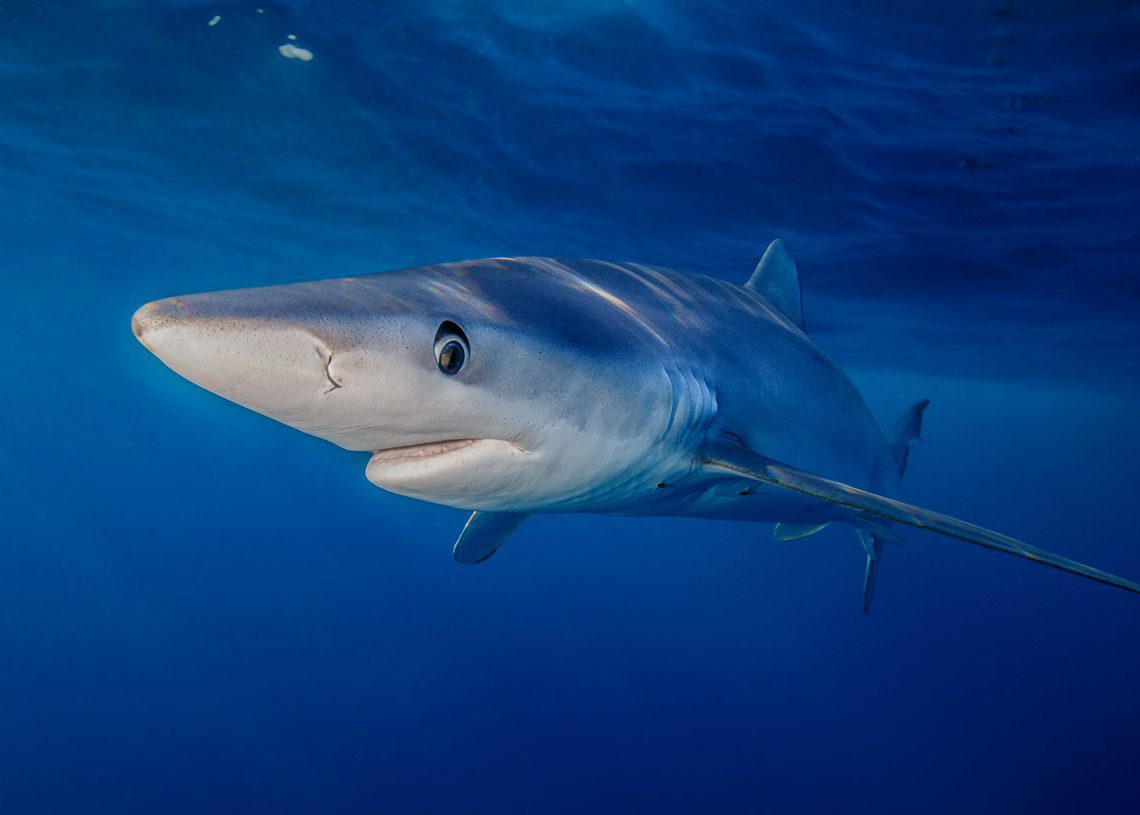 Headlines about the first shark attack in Britain might better be reworded as most fished shark in the world bit a person.  Swimmers may be wondering if blue sharks (Prionace glauca) are something we need to worry about? The answer is yes, but not because they are going to bite us.

Since official records began in 1847 there had been no unprovoked shark attacks in Britain. Until last week on 28th July when a snorkeller was bitten by a blue shark. Although, there are previous reports of bites from sharks caught by fishers these are considered to be provoked attacks.  Britain’s first unprovoked attack caused a leg injury to someone on a day trip organised by Blue Shark Snorkel to see blue sharks.  Run throughout summer these trips take people 10-20 miles offshore, where the water is chummed and within 30 minutes to 3 hours blue sharks appear.  They are open ocean sharks, living in what might be considered the wet and salty equivalent of a food desert as suitable prey is sparsely distributed. Putting enticingly scented food in the water sets up a scent trail that blue sharks will follow to investigate its source.

Dr Gavin Naylor, Director of the Florida Program for Shark Research explains how chum can influence shark behaviour. “We have ample evidence in the ISAF (International Shark Attack Files) that a significant percentage of shark bites are associated with baited diving operations. Sharks spend a great deal of their time looking for food. When they find it, they generally become excited. Blue sharks are pelagic animals that range widely in the open ocean, much of which is tantamount to a “food desert” so when they find food they stick around and look for more. Any time people are in the same environment as sharks the probability of a shark mistaking a person for food increases. This is exacerbated when the sharks are excited by the presence of chum.”

Most open water swimmers are not 10 to 20 miles offshore in deep water. Additionally swimmers are not swimming with bait designed to attract sharks in water around them.  If you swim inshore without trailing chopped up chunks of fish wafting the scent of food through seawater you are exceedingly unlikely to attract blue sharks.

Having gone on a snorkelling trip with the intention of seeing blue sharks, not the intention of getting a headline making bite, the snorkeller bitten off the Cornish coast stated, “Despite how the trip ended, it was amazing to see such majestic creatures in the wild and I don’t for a second want this freak event to tarnish the reputation of an already persecuted species.”

Certainly blue sharks are more vulnerable to people’s actions than a threat to people. They are the most fished shark species. Caught as bycatch—victim to our taste for tuna and swordfish—they are also deliberately caught for sport and as part of global trade in shark meat and fins.

Longline fishing for tuna and swordfish uses hundreds or even thousands of baited hooks attached by short lengths of fishing line to one long main fishing line. Blue sharks as well as the target fish species are hooked and caught. Squid are a large component of blue sharks’ diet and hooks baited with squid attract them. Using fish as bait instead of squid significantly reduces the number of blue sharks caught by accident on longlines set for tuna and swordfish. Another way to reduce blue shark bycatch is using weak material to attach baited hooks to longlines. Caught on a hook attached by nylon sharks can escape, hooks attached with stainless steel wire are hard for sharks to escape.  Changes in commercial fishing practice can reduce the bycatch of blue sharks.

However blue sharks are also sought by recreational and commercial fishing. Measuring mortality post-release of sharks caught for sport is under researched. One study found that 10-35% of blue sharks die after being released.  Commercial fishing supplying meat and fins for consumption has a notable impact on blue shark populations. Globally they are the most fished shark species. Blue shark catches peaked in 2013 at 137,973 metric tonnes (mt) then rapidly declined to 103,528 mt in 2017. This may indicate population decrease as a consequence of unregulated fishing.

Apart from being consumed by wildlife trade and harmed by fishing practices what are blue sharks like? They are curious and will come close to people. Eating mostly small fish and squid their interest isn’t in taking a bite of a person. Camouflaged for open ocean life they are ocean blue on their back and white bellied. Seen from above they blend with seawater, and from below they merge with light coming from the surface. Blue sharks are highly migratory, crossing borders as they travel across oceans every year. Atlantic blue sharks breed off the coast of North America and the Caribbean, and then cross the Atlantic to southwest Europe and North Africa where they give birth. Subsequently returning to North America and the Caribbean makes their migration a 9000km swim.

What can swimmers learn from the first shark bite in British water?

One of the most fished sharks in the world visits us. Their ocean crossing long distance swims are impressive, but also bring them into danger as they pass through countries and waters where they lack protection. It will take international co-operation to regulate blue shark fisheries and limit the number of blue sharks caught to sustainable levels. Snorkel tours where people have the experience of meeting them might, one-tour at a time, be a good way of increasing allies for blue sharks who will support conservationists asking fisheries to limit their capture.

How do I best structure my training for a 5k swim?