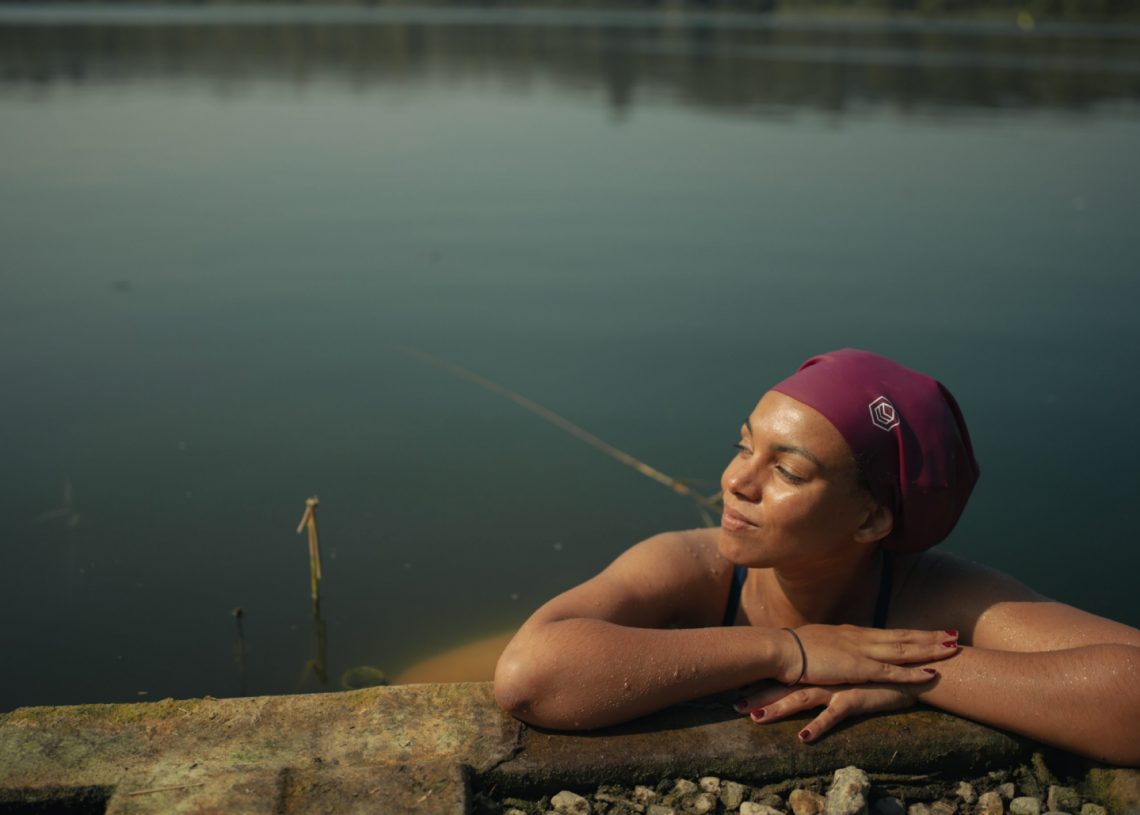 Fifty Four Days – a film about a spirited young woman who turns to wild swimming in search of answers after a profound loss – is to have its US premiere at the Academy Award qualifying Pan-African Film Festival.

“From multi-million dollar blockbusters to newly emerging Hollywood talent, the Pan-African Film Festival has become the quintessential global celebration of Pan-African cultures, working to especially highlight stories that reinforce positive images and help to destroy negative stereotypes,” said Writer and Executive Producer Cat White on the announcement. “We are so excited for its future in changing a narrative around Black swimming, Black mental health and reminding us that hope is always just around the corner,”

The Pan-African Film Festival is dedicated to celebrating the most exceptional Black stories and especially those that reinforce positive images and destroy negative stereotypes.

Fifty-Four Days follows the story of a young woman who discovers outdoor swimming when grieving for the loss of her father. In March 2022, Editor Ella Foote interviewed Cat out about the real-life events that inspired the work…

Despite not swimming for almost a decade, on a cold January day in 2020, Cat White sank into a local lake near her home in an effort to escape her grief. In just her underwear she swam. It went against all safety advice but something was released and so she kept returning to the water.

Fast forward to 2022 and Cat is starring in an upcoming film, Fifty-Four Days. Also featuring Celia Imrie, Juliet Cowan, Delroy Brown and Josh Williams, the film is written and produced by Cat too. “Around April last year after returning to the water regularly, I was lying in bed, not sleeping and had this idea about making a film,” says Cat. “I didn’t know quite what it would be, but I knew it would be about a girl who starts swimming after losing someone to suicide.”

In early 2020 Cat’s Uncle Delroy died unexpectantly without warning. The only son out of seven siblings, his death sent shock through the family. It had a big impact on Cat and she developed a death anxiety. “I went into a permanent state of panic that everyone I loved was going to die,” she says. “It felt like there was something stuck in my chest and I couldn’t breathe.”

At the same time Covid-19 arrived in the UK and the country started to shut down. Living near Hinksey Lake in Oxford, Cat started using her daily exercise time to walk to the lake and be beside the water. “I was walking this exact same route every day and sometimes would see swimmers,” she says. “I started to think, I am going to try it and then one day I did! Looking back, it was really dangerous, I was on my own and not prepared.”

“Grief is always an unresolved feeling”

Cat started to swim every morning and it became part of her routine, she felt notably better as a result. When winter rolled around again Cat stopped swimming and then in January 2021, one of her oldest and dearest of friends took his own life.

“It was almost a year since my Uncle’s passing, it was Blue Monday,” says Cat. “Despite it being a totally manufactured day, my friend Simon died by suicide that day and it really freaked me out. I fell apart; it was so unbearable.”

Simon’s death was overwhelming for Cat; it triggered feelings from her Uncle’s passing and left many unanswered questions. “Grief is always an unresolved feeling,” says Cat. “But when it is sudden and unexplained it is magnified by a million. I couldn’t do anything during that time.”

During a state of uncertainty Cat returned to the water and, again, it became a regular relief. “Because of the parallels between the two deaths, I looked to what had helped me before,” says Cat. “This time I found a way to swim with others.”

Cat’s academic advisor at the University of Oxford, Henrico, also swam outside and introduced Cat to a group. “Swimming on my own at first was really healing and what I needed,” she says. “But when I returned to the water, I needed that community unity. I became obsessed with it and kept trying to convince other friends to try it too.”

It was around this time that Cat started to write a story inspired by her own experience. Fifty-Four Days follows the journey of a girl who starts wild swimming in the wake of losing her father to suicide.

Creating opportunities and changing the narrative

Cat’s writing and acting are in addition to a job at the United Nations (UN) where she is a gender advisor. She is also the Founder and CEO of Kusini Productions, a platform established to create opportunities, change the narrative and champion voices of Black women and girls.

As a writer, actor, filmmaker, CEO and gender expert for the UN it is amazing that she had time to meet me for a swim. “Working at the UN, you can get lost in the bureaucracy,” says Cat. “But working on other projects has made me better at my job. The thing I have loved about filmmaking is that it is community led and telling stories. It has created bigger conversations too. I was writing about my life and I realised I was raising themes that matter to people, issues around Black people swimming, mental health and suicide.”

Cat is now working with Papyrus, a UK charity that works for the prevention of young suicide and has partnered with SOUL CAP, an inclusive swimwear brand that actively campaigns for greater representation and participation in the world of swimming.

Cat learnt to swim as a child and loved it; she swam with her sisters and competed in the pool too. But during her teenage years she didn’t want to swim anymore. “My parents didn’t want me to quit because I was really good at it,” says Cat. “They would drop me off at my swimming lessons and I would hide in the changing rooms.”

“I went through a whole thing with my hair; my sister often tells the story of me trying to do a straddle jump while trying to keep my head up out of the water. I lost what I loved about it and I didn’t have any role models in swimming. At that age it was stumbling block upon stumbling block. I want to swim but I can’t find a decent swimsuit, or I get my period and then I can’t find a hat that fits my hair and the water is destroying my hair every time I swim. Suddenly there are too many factors and you don’t carry on.” Apart from occasional swims on holidays or for leisure, Cat barely entered the water until two years ago after her uncle’s passing.

Fifty-four Days explores mental health, race, friendship, grief and wild swimming as a form of healing, mimicking Cat’s experience since entering the water as a child and on that cold January day in 2020.

Cat hopes it might lead to a feature-length film and it has also led to her writing a book, If We Are Going to Heal, Let It Be Glorious which will be published by Hachette imprint Dialogue Books in 2023.

Discover more about Fifty Four Days. Find out more about writer and Executive Producer Cat White. Follow the film’s journey via Instagram. This story originally appeared in the March 2022 edition of Outdoor Swimmer, which you can buy here.