This year’s Henley Classic once again put on a spectacular show both in and on the water. With possibly the least-viewed laser show on earth, early-morning swimmers and spectators marveled at Henley Swim’s amazing green laser, casting an eerie glow as dawn broke over the hallowed waters of the Royal Regatta course.

If the prospect of a laser show wasn’t enough, Henley Swim’s blue riband event is now becoming known for its world class twilight racing with some fantastically close competition.
GB open water team members Tom Allen and Caleb Hughes ensured the elite category continued its rise to prominence in world swimming. Hughes out-sprinted Allen by less than a second to finish in 24 mins 14 secs. Both beat the previous course record of 24 mins and 19 secs set by Alex Studzinski.
In the elite women’s race Fern Davies beat Amber Hughes to break her own course record in a time of 27 mins 2 secs.
The straight boomed course, designed to cut the wash for rowers, allows for fast and safe swimming and will also be used for the Henley Mile and Open Water Swimming Show on Sunday 12 July.
Henley Swim co-founder Jeremy Laming said of this year’s event: “It’s no exaggeration to say that every year we host the event, the quality of the competition gets ever more exciting and is now genuinely world class.”
For more information and to sign up to this year’s Henley Mile, see http://henleyswim.com/events/henley-mile/ 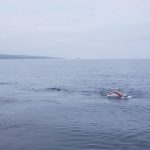