FINA rules – the ones they use for the Olympic Marathon Swim – are not to everyone’s liking as they prohibit the use of wetsuits. But for those who prefer to swim without neoprene and compete against other non-wetsuit swimmers here’s a selection of events organised by the Amateur Swimming Association (ASA) and its Scottish counterpart, the SASA.

The event list has been compiled by Les Debenham, the Chairman of ASA South West Region Open Water Swimming, who also organisers an ASA 10k race in Weymouth.
A number of the events (including the Weymouth swim) also feature a “wetsuit” category for those who aren’t yet ready to shed the neoprene.
Download the list here.

What if I get stung by a weever fish? 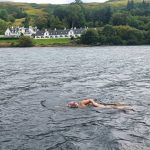