It is what we have long believed, but new figures confirm that outdoor swimming is undergoing a period of massive growth. Research from the latest Active Lives Survey from Sport England revealed that more than 4.1 million people swam in lakes, lochs, rivers and seas between November 2017 and 2018. Additionally, the amount of people who regularly went open water swimming in the previous 28 days also rose. The figures showed that 490,660 people went open water swimming in the last 28 days between November 2017 and 2018 – a massive increase on the 266,500 people recorded in the November 2016 to 2017 survey.

It confirms more anecdotal evidence that we as swimmers have observed around the country: the growth of organised events and races; more swimmers at commercial venues; more venues opening up through the winter to cater to the demands of increasing numbers of winter swimmers inspired by increased media coverage of the mental as well as physical benefits of swimming outdoors; booming memberships of outdoor swimming clubs; more groups springing up around the country; not to mention the 40% growth in Outdoor Swimmer Magazine subscribers since 2017.

Photo: Every month we send Ella Foote to swim with a local swim group. In the June issue of Outdoor Swimmer Magazine she swims with Bude Open Water Swimmers. 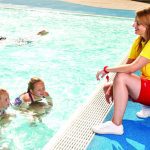