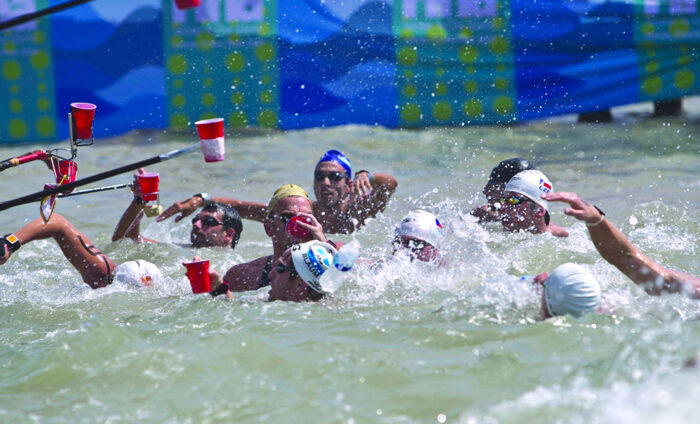 ‘Athlete’ is defined by most dictionaries as someone who is ‘proficient in sports and exercise’. The term originated from the Latin word ‘athelin’, which means ‘to compete for a prize’. Any individual striving for performance could be considered an athlete, but the term describes a broad spectrum of abilities – from an Olympic gold medallist right down to the swimmer looking to take on their first open water swim.

Any athlete looking to perform at their best will take into consideration everything from training and technique to recovery and fuelling. But how you approach these factors will depend on where you are placed on the athletic spectrum. In the same way that a beginner athlete is unlikely to be able to achieve the same training volume as a highly competitive elite athlete, or have as efficient technique, how an athlete approaches their fuelling and hydration can also be very different too. We take a look at how you should approach fuelling depending on the type of athlete that you are.

If you find yourself running out of fuel (bonking!) during sessions, then you need to increase your carbohydrate intake

How to determine these requirements is based on the training volume that you are completing. The more training, the greater the carbohydrate intake needed. These figures can be used as a guide, but it is best to experiment to see what works and try and match your intakes to your training loads. If you find yourself running out of fuel (bonking!) during sessions, then you need to increase your intake.

The fuel tanks of an elite athlete are going to be slightly larger than those of an untrained individual, as the body adapts to endurance training by forming bigger fuel tanks for storing carbohydrate, but still the carbohydrate intake recommendations for a recreational athlete are quite similar. If the event represents a serious goal on your calendar, then a carbohydrate loading regime in the days leading up to the event, along with a reduction of training volume (often referred to as a taper), will ensure that you can arrive at race day in the best possible condition. Three to four hours before an event will be your last chance to get a good meal in, so aim to consume a meal that is high in carbohydrate and low in fat (the low fat content encourages carbohydrate uptake). You should be looking to consume around 1-2 grams of carbohydrate per kilogram body weight, so for a 70kg athlete this is 70-140 grams of carbohydrate. Consider a meal like porridge or toast with jam, or if you are struggling to stomach a meal with pre-race nerves, then an energy bar can offer a good alternative.

Open water swimming provides a unique challenge, as the environment that swimmers are exposed to can often be very cold

At low exercise intensities, the body can cover the energy demands of exercise through the metabolism (burning) of fat as a fuel. As exercise intensities increase, we start to rely more heavily on carbohydrate. As normal healthy humans, we typically have enough fat reserves to cover a significant amount of exercise (well over 1000 miles of walking for example), but we have very limited carbohydrate stores, which can be depleted in as little as 60-90 minutes when exercising hard, even if you have loaded your stores beforehand. Regardless of what standard of athlete you are, as a general rule, carbohydrate is the critical fuel source for any exercise you complete which you perceive as hard and causes you to become out of breath. The body simply doesn’t have enough carbohydrate for prolonged exercise and therefore to maintain performance on longer swims, you have to rely on eating carbohydrate to ensure sufficient fuel is available.

Open water swimming also provides a unique challenge, as the environment that swimmers are exposed to can often be very cold. This reduces the efficiency of the working muscle and further increases the reliance on carbohydrate as fuel. During extended endurance exercise, the immune system will also become suppressed and the fuelling of carbohydrate during exercise can help prevent this suppression and help ward off illness.

For an elite or highly trained athlete competing in a race longer than 5km at race pace, an intake of 90 grams of carbohydrate per hour is optimal to maintain performance. This can only be achieved by combining two forms of carbohydrate such as maltodextrin and fructose in a 2:1 ratio. An intake of 90g is very high and does require some practice in training.

The benefit of carbohydrate fuelling can be achieved with relatively small amounts of carbohydrate, so 60 grams per hour still offers a good level of fuelling if you’re not comfortable with 90. Optimal intakes for any athlete striving for top performances, however, are in the region of 60-90grams per hour, regardless of the standard of athlete. An elite athlete may be swimming at a much faster speed than a beginner, but if they are both striving for performance and pushing themselves, the fuelling needs are likely to be similar.

Once you have completed a swim, the nutritional goal moves to returning the body to its pre-exercise state. The three main goals are to replenish depleted carbohydrate stores in the form of glycogen; rehydrate through replacing any fluids and electrolytes lost during exercise; and repair and rebuild through the consumption of protein.

Alongside these factors, carbohydrate and protein consumption after exercise also plays an important role in returning the body’s immune function to full strength, so eating immediately after exercise should be of significant importance irrespective of athletic standard. A properly formulated recovery drink offers a very straight-forward vehicle to deliver essential nutrients.

For any serious athlete looking to complete multiple intense or long-duration training sessions within a day, rapid recovery is essential to ensure that they are able to perform well in the subsequent session. Here specially formulated recovery drinks come into their own and these should be followed by a number of high carbohydrate meals depending on the training volume completed. These can play a key role in ensuring that fuel tanks are topped up again for the next session.

For any athlete who might not look to exercise again for a few days, then less importance is placed in getting your fuel tanks topped up in the shortest time possible – in which case, normal eating of a high carbohydrate diet with good sources of protein would suffice.

Optimally fuelling your training results in adaptations that put you in a better and ‘fitter’ position on race day, so consider your overall nutrition to be just as important as ‘competition nutrition’.

Finally, please remember that if you are planning your nutrition for a specific event or race, make sure that you practise your strategy during training.