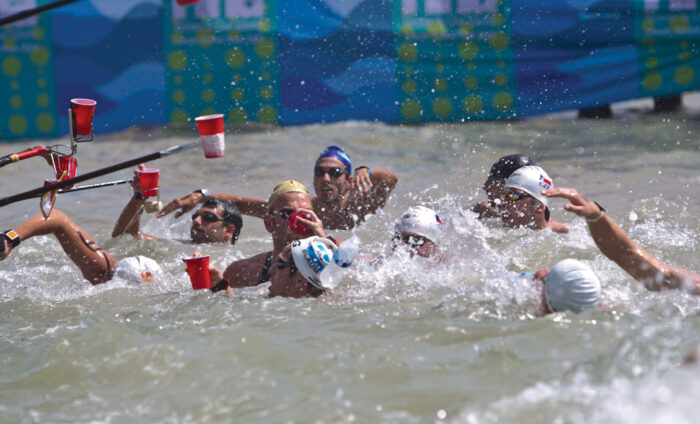 For all endurance sports, two major factors that cause fatigue and ultimately slowing down are dehydration and running out of carbohydrate. In open water swimming the situation is complicated by the water and ambient temperature, sunlight and the use (or not) of wetsuits, all of which will impact sweat rates.

Carbohydrate depletion is often referred to as ‘hitting the wall’ or ‘bonking’ and happens when exercising hard for longer than 60 to 90 minutes without taking on additional carbohydrates. At high exercise intensities, carbohydrate is the main fuel source, and the body has limited reserves. When a high pace is sustained for a long period of time (more than 60minutes), and if no carbohydrate is taken in, then there will be a sharp reduction in performance as the body runs out of its precious carbohydrate reserves and is forced to rely on other, less accessible, fuels.

Dehydration results from a loss of body water, typically through sweat. A weight loss in excess of about two percent of body weight through dehydration will significantly reduce performance, particularly in hot conditions. How much body water you lose during exercise is down to a number of factors including clothing, exercise intensity and environmental conditions.

Ensuring optimal carbohydrate intake during exercise is relatively easy. At high exercise intensities the body is able to burn though significantly more carbohydrate than the stomach can process, so it makes sense to try to aim for the upper limits of what the gut can tolerate.

Recent evidence has shown that providing the composition of nutrients is similar the stomach can process solid foods, gels and fluids at very similar rates to each other, but each will have their own benefits in certain situations. The speed at which they are absorbed is down more to their composition than physical consistency. High glycaemic index foods and drinks will be absorbed quickly in comparison to low glycaemic index foods. It is also important that any food consumed during (or immediately prior to) intense exercise is low in fat, fibre and protein as these nutrients will slow down carbohydrate absorption. As we’ve discussed previously, a mixture of maltodextrin and fructose is the most effective way of delivering carbohydrate as it allows intake as high as 90 grams of carbohydrate per hour, compared to single forms of carbohydrate (such as glucose, which is found is many sweets and some nutrition products) where the maximum achievable absorption is around 60 grams per hour.

In comparison to fuelling, hydration requirements are more difficult to calculate as sweat rates vary considerably in different conditions. For many, drinking to thirst and being aware of their urine colour over the course of an event is sufficient to stay on top of hydration. However, for those looking for a more scientific approach, recording bodyweight before and after exercise, whilst also taking into account any fluid taken in during exercise, allows sweat rates to be calculated and a dedicated hydration strategy formed off the back of it. This can, however, be awkward for swimmers.

Knowing the above, we can consider our approach to fuelling and hydration under different scenarios.

In hot conditions or when sweat rates are high (for example, in warm water or when wearing a wetsuit) you will need to take in water and carbohydrate. In this scenario, the most effective and convenient way to cover both requirements will be to use an isotonic energy drink that also contains electrolytes. Using an isotonic formulation (intended to match the concentration of salts and sugars as they are found in the body – typically 60grams of carbohydrate per litre of water) will ensure that both fuel and water is delivered at optimal rates and shouldn’t result in stomach issues. The addition of electrolytes will help stimulate thirst and assist with the absorption of the fluid within the body.

Gels, energy bars or solid food can be used in this scenario, but will require a significant amount of water to dilute them to a concentration that the stomach is able to process. For each 30grams of carbohydrate consumed around 300-500ml of water will be required or stomach upset is likely to be a problem.

In mild or cold conditions, water loss is likely to be significantly lower and a different approach is required  not only to prevent regular toilet stops but at worst a dangerous condition called hyponatraemia, where the body becomes over-hydrated and hence sodium levels too low. Here the intake of energy drink can be reduced but the subsequent shortfall in carbohydrate should be made up through gels, bars or food, depending on what is the most convenient to use. Alternatively, energy drinks could be mixed at double strength, as some long distance cold water swimmers recommend.

With the above, it is very important to be aware that sweat rates can still be high if lots of insulation is worn (such as a thick wetsuit) or exercise is very intense. 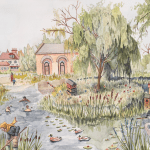