Mike Tyson, the legendary American boxer, once said “I reach for the stars, and if I miss a star then I grab a handful of clouds.” His point is clear – set your goals high and then even if you don’t achieve them, you’ll accomplish something great. But in athletics is that always the right attitude?
Yesterday I took part in the Great Chesapeake Bay Swim, which is a 4.4 mile swim across the bay from Annapolis to Kent Island in Maryland, USA. If you ever get the opportunity, I highly recommend it. You swim directly under the Great Chesapeake Bay Bridge; it is by far the coolest course I’ve swum! The people are great and the safety team is outstanding – kayakers, motor boats, armed coastguard, full on-water medical support and helicopter surveillance. It is also one of the oldest organised swim events, having been started in 1982 by Brian Joseph Earley and taken over 24 years ago by Chuck Nabit.
But it’s a sea swim and living in Ontario, Canada, I swim almost exclusively in the Great Lakes. I’ve learned to deal with 12 degrees Celsius water and strong chop but not the challenges of sea swimming. I am not accustomed to swells, strong currents or the dehydration associated with salt water and I have abnormally strong allergic reactions to jellyfish and sea nettles.
Nevertheless, the first mile of the Great Chesapeake Bay Swim was possibly the easiest mile I have ever swum. I loved the course, I was surrounded by swimmers, the water temperature was lovely (25 degrees) and it looked like clear skies ahead.
I made it to the first mile marker in great time and continued on happily. But halfway to the second mile, I realised that I had been pushed off course. If I didn’t correct my path quickly, I would swim into one of the bridge supports. I angled and angled and angled and eventually realised that the current had become so strong that I needed to swim at 45º to progress straight.

I made it to the 2-mile feed boat but I was less than halfway done and I was spent. I had no idea how much longer the current would continue or how much more I could fight it. I had been swimming in a pack before the feed boat but after leaving it, I slowed down until I was swimming alone. A kayaker saw me struggling and promised to accompany me for as long as I could swim.

With his encouragement, I pushed on to mile 3 but I was miserable. The current stopped but a swell replaced it and every second in the water made me more and more nauseous. In addition, the 38 degrees air temperature and strong sun were providing more heat than my Canadian body could handle.

I tried to swim beyond mile 3 but I felt my eyes closing in the water and I was worried that pushing further would lead to reaching the finish line in a water ambulance. So I pulled myself. 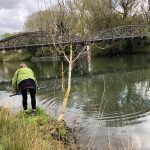