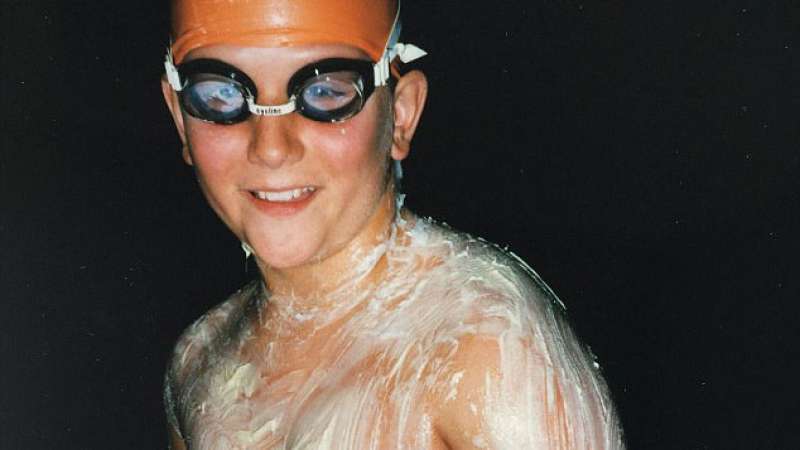 In 1988, 11-year-old Tom Gregory became the youngest person ever to swim the English Channel. We met up with him for a swim and a chat about his William Hill Sports Book of the Year Award winning autobiography A Boy in the Water

Joy, adventure, happiness, love and camaraderie is how Tom Gregory describes his book, A Boy in the Water. We are warming up and enjoying breakfast at the Royal Victoria Pavilion on Ramsgate beach. I have just taken Tom for a swim back in the English Channel, 30 years after he crossed it when he was just 11 years old.

“I feel supercharged after that swim,” says Tom. We swam off Ramsgate main sands against the strong current pulling us east up the Channel. It was surprising how fast moving it was and as we swam I could see it had ignited something in Tom. He told me how he wrote his book on the 7.28am from Farncombe in Surrey, where he lives with his young family, to work. It isn’t long after sunrise and a sea mist is moving in, the sea is flat and the perfect autumnal temperature that gives you the zing but without the cold needle pain.

I totally underestimated Tom’s book when it arrived in the post over the summer. Hands up, I thought it was just another story about swimming the Channel. I am happy to admit I was wrong. “Being an 11-year-old boy is an arbitrary piece of information,” says Tom. “It is just age!” But I disagree, it is the age and tale of being a boy that makes it such a compelling read. Grown men and women cross the Channel each year – it isn’t easy for them, but it has become fairly common in the swimming community. When I was 11 the main event in my life was starting secondary school and worrying about fitting in with the other kids. I can recall the shoes I wore on my first day and being a little bit in love with Freddie Mercury, despite the fact most of my peers were fans of Take That. Swimming for 11 hours and 54 minutes across one of the busiest shipping lanes in the world would have been beyond my imagination.

“I remember the detail around it so well,” says Tom. “The memories are hung together with pop music, locations, people and an incremental path of five miles, 10 miles, 17 miles… year on year. The detail of the events fit together in a very linear sequence. From aged seven to 11 I have very vivid childhood memories, they were such adventures, they are burnt into my mind in a very positive way. I can hear something on the radio from the 1980s today and know it was 1986, despite the fact I was just eight! It was on that tape, I remember it and Windermere.”

It is the memories and detail that Tom writes about that are incredible – the conversations, fears, feelings, the tears and the taste of tomato soup in the middle of the Channel. The tale begins, like many Channel crossings, on a beach at 5am in darkness. The story then leaps between the swim and his training regime to get to that point, punctuated with music memories and friendships. It is raw, brutal, emotive and fascinating.

“I didn’t sugar coat any of it. It is a memoir – this is what happened and this is how it felt,” says Tom. “Long distance swimming is hard, endurance swimming is hard. You can’t gloss over the darkness in it, it is what it is. All the swimmers who have done a long swim and have read it, have said that is exactly what it is like and in those moments that is how you feel. Most readers, especially the swimmers, see the story as joy, adventure, happiness, love and camaraderie, they see it the way I see it. Some others see something different, that has really surprised me and sometimes has been upsetting.”

When the book was published in late August it became BBC Radio Four’s book of the week. Tom was on the radio every day and had to take a week off work. He was camped out at the BBC doing radio show after radio show and then live television. He started to receive reviews and reaction to his story that suggested something had changed in the 30 years since he broke the record for the youngest person to cross the Channel. “Back then people wrapped me in a Union Jack and shouted – YEAH!” says Tom. “No one asked if I was alright with a concerned face. Asked if I was damaged? They just thought it was brilliant. Thirty years later the facts haven’t changed, but the questions have and I almost felt like I was being asked to defend something. I was so surprised, what were they looking to find here? Nothing. Bad. Happened. This is a good story, please don’t pull it under the water looking for bad news, there was nothing bad about it.”

As a swimmer I read a story of dedication, support and courage but surprisingly others read a different tale. “I don’t want to be turned into some poster child for neglect. I am a parent, no one overrides their protective instinct for their kids,” says Tom. “I have enormous admiration for my mother and father, it was quite a courageous thing for them to sit back and watch it all happen. But everything was in the eyeline. There was lots of us kids training hard, there was a big gang of people so on the surface and beneath it there was nothing to worry about. The evidence was that Anna (Tom’s sister) and I were safe, but the other thing both my parents could see was that we were having the time of our life. My wife Helen often says to me, if the children are happy, everyone is happy. It was no different then.”

Tom didn’t show the book to his parents until it was published, purposely not wanting them to change his memories with their own. “It has been a real lift for them, these were happy times for us,” says Tom. “Anna was a great source for fact checking and ensuring I had the right person on the right swim. There were a couple of things that triggered memories for Mum and Dad that I didn’t know about until the book was published, they had their own recollections from their vantage point. I wrote it genuinely as it happened. I told the truth, the facts haven’t changed. My parents still say today that the best thing they did was allow us to get involved in the swimming club, what it did for our lives and the resilience it taught us.”

Of course Tom’s story isn’t complete without John Bullet, rebel swimming coach of the South London club in Eltham. He saw something in Tom in his early swimming lessons. His character, personality and passion is what gets Tom to eventually be strong enough to cross the Channel. Today John’s methods would be a little controversial but Tom is quick to reinforce the positive impact he had on his life, his sister and all the other kids at the club. “I found all the people in the book and got as many as I could to the book launch,” says Tom. “Big Steve, Bleachy, Marcus, Miss Piggy, Rabbit and Mother Duck – they were all there and they all said the same thing: ‘John changed my life’. He was one of the people that make the world go round, showing children they can do anything. I was a distinctly normal eight-year-old; I don’t think John was a rule breaker, I think he just saw no barriers for children. He taught us that anything is possible if you let your children dream enough and give them a bit of help.”

Tom and I are joined by his wife Helen and two children Rosie (four) and Beatrice (one). Rosie says she is going to swim the Channel with her Dad so she can write a book and he can have two books. I ask him how comfortable he would be if his girls wanted to take to the water and do similar feats. “It doesn’t worry me,” says Tom. “I stand by what I thought and said as an 11-year-old when they voted to stop anyone under the age of 16 swimming the Channel: with the right training and support it is possible and safe – I am evidence of it! Anything is possible. We can’t do it on our own, you have to let people into your world. These mercurial special people, who can add and enrich our lives so much, you have just got to let them in.”

It’s called the ‘Clean Half’ for a reason 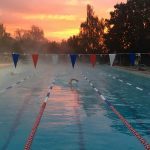