David Coleman recently became the third person to swim from the Channel Island of Alderney to France, and hence the first person (he believes) to have swum to France from two different Channel Islands.
With the huge increase in the popularity of open water swimming, it is becoming harder to find a challenging swim that has not already been tried and tested. It is even more of a surprise to find that one such swim exists on our doorstep: across the English Channel no less. The swim across the Channel from the northern most Channel Island of Alderney to the Cherbourg Peninsula in France is an extremely challenging one that had only been completed twice before, once by in the 1950s and secondly by local swimmer Paul Clarke, in a wetsuit, in 2012. My swim would be under Channel rules.
The straight line distance between Alderney and France is 8 miles at the narrowest point but the Channel here has huge, powerful tidal movements known as the Race of Alderney. The Race is infamous amongst the sailing community but little known to open water swimmers. It is a fast moving tide that passes between the island and France producing currents up to 12 knots. Coupled with that, there is an area of the Channel that contains heavy overfalls, where the tide flows over a shallow part of the seabed producing extremely rough, fast flowing conditions. Swimming through these was easily the most challenging I have ever done anywhere and required plenty of mental strength as well as having to swim as hard as I possibly could for 20 minutes.
Planning this swim had to start from scratch and the most crucial factor was sourcing a local pilot who had a detailed understanding of the tidal conditions around the island. After making initial inquiries I was pointed in the direction of David “Bugsy” McAllister, a local sailor and fisherman who had helped Paul on his 2012 swim. David was willing to assist me but had to rethink the swim route as Paul was swept a long way south and had to swim a huge distance to make it to France. With the assistance of Paul and Roland Gauvain from the Alderney Wildlife Trust, a team with extensive local knowledge was assembled for my attempt.
David selected the neap tide of 21 August as the best day to take on the Race. Two weeks before that he enlisted the help of Olympic gold medallist Duncan Goodhew to test an untried starting route from Cats Bay under the Mannez Lighthouse. He asked Duncan to swim away from the island for an hour and was happy that it was possible to get out into the Race without being swept too far south too early in the swim. However, I am no Olympic swimmer and although I had worked on my swimming speed in order to maintain a reasonable 3 kilometres per hour, I was slightly apprehensive that wouldn’t be fast enough to get out quickly enough to avoid the massive southerly pull of the tide.
My swim day dawned bright and calm although by my swim start at 13:00 hours the wind had picked up to a steady force 3. This was manageable although I did experience much stronger gusts during the swim. David and Paul stationed the pilot boat 300 metres out to sea and Roland accompanied me from the beach through the rocks in his kayak. Because of the massive tidal movement it was not possible for the pilot boat to maintain close station next to the swimmer so expert kayak support was also required for the whole duration of the crossing. Roland carried all my feed requirements in the kayak and I found it much easier taking feed from a kayak rather than from a high sided pilot vessel.
David had anticipated that I would swim out eastwards towards France and then once into the Channel be taken south before sweeping up north towards the coast. In actuality this did not happen. I swam in an easterly direction into the Channel and then swung south as anticipated but inexplicitly started to move in a north easterly direction far earlier than expected. This resulted in me missing the west coast of the peninsula and crossing the northern coast 2 nautical miles off the Cap de la Hague. Luckily, this was not a problem as I was making good progress across the top of the Cap and was in a good position to catch the tide into the coast.
However, landing was another matter altogether and my swim was almost ruined by the tide changing when I was 200 metres from the beach. I got caught in the outgoing tide and found myself being dragged back out to sea. At this point the current was about 3 knots so it took all my failing strength to swim diagonally across it until I could land on a very rocky beach, 6 hours and 27 minutes after I had left Alderney. Had I been there 5 minutes later I would never have been able to land as the outgoing tide very quickly picked up to 9 knots.
My day was by no means over at this point as the RIB couldn’t get in to the beach to pick me up against the tide running over dangerous rocks. I therefore had to scramble up the rocky cove in my swimmers, walk over a headland track and scramble down a bank to reach the next bay where the RIB could get in to pick me up.
Find out more about David’s swimming and follow his progress at: davidcolemanswims.blogspot.co.uk/

Club of the Month – Cheddar Kingfishers 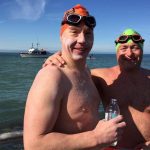