Our cover images policy at Outdoor Swimmer is, as far as possible, to celebrate real swimmers doing real swimming (rather than models doing pretend swimming). In our February 2019 issue we have a race report from the 2018 River Waveney Swim. Mark Hewlett captured the beaming smile of Ben Gaskins, shortly after he finished, so we decided to put him on the cover. We also had a few questions for him.

​How did you find out you were on the cover of Outdoor Swimmer, and how did it make you feel?

I was oblivious to the fact that I had made the cover picture until a good friend of mine, James Fuller sent me a screen grab, initially I thought he had been creative on Photoshop but as soon as I googled the magazine I realised it wasn’t a prank. It feels slightly odd that people are buying a magazine with my face on the front of it.

What have your friends and family said? And what did they think of your lovely cap line?

I have had a lot of comments from friends, family and colleagues, most of whom were unaware of the cap line. Some were surprised at my photo being chosen as the cover picture but my wife thinks I should be a model! When I completed the swim I had thought the cap line was a suntan but soon realised it was the grime from the River Waveney.

What was it about the Waveney swim that left you looking so pleased with yourself when the picture was taken?

It was a combination of knowing I had achieved my goal and satisfaction of being part of such a great event. The setting was beautiful, the weather was perfect and the atmosphere which was created by the organisers was very friendly and welcoming. The event was very enjoyable and I would recommend it to anyone looking for an open water swimming challenge.

Was this your first swim of this kind of distance? What type of swimming do you usually do and how did you become an open water swimmer?

Prior to the event I had dabbled with a little bit of open water swimming when training for various triathlon events but I had set myself a New Year’s resolution of completing a 10km swim. The farthest I had swum in open water was 2km so I started training over the winter at an indoor pool and in the early spring I braved the local River Bure along with weekly sessions at Fritton Lake in Suffolk.

It looks like you had a close race with Mark Hansell, and beat him by just two seconds. Did you know Mark before or did you just end up swimming together?

I first knew Mark as my dentist when he replaced my front teeth that were knocked out by a car when I was six years old! Now, as my friend who I often swim with. We have done various events together over the years, he is by far the stronger swimmer and would have beaten me if we had been racing. I was glad to have Mark’s company during the three hours it took to complete the event.

If someone is fairly new to open water swimming, what advice would you give them if they were considering doing something like the Waveney Swim?

My advice would be to find a friend to train with and just enjoy your swimming. Open water swimming really is a great hobby. Not only is it good for your mind, body and soul, you can explore and enjoy lots of otherwise unreachable scenery. 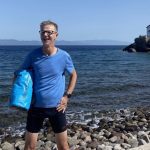 Get ready to race – recipe 3