How many times in the national and regional press have you read the word ‘brave’ to describe people going about their normal everyday open water swimming business? It’s particularly prevalent at this time of year but you also see it in the summer. Here are a few examples:

We’ve no doubt some swimmers are terrified of open water and have made a massive effort to overcome that fear and this is to be applauded, but is it really brave? Bravery implies putting yourself at risk of harm or pain usually for the purpose of achieving some greater good – without the latter, isn’t it just folly?
The problem we have with the word when used in the context of open water swimming is that it implies the activity is unpleasant or even dangerous and therefore you need to be brave in order to do it. The reality is that open water swimming is fun, exciting and good for us. The majority of us (hopefully) do it because we enjoy it, not because we are courageous. The repeated use of the word ‘brave’ perpetuates a myth that open water swimming is an extreme and risky sport and this creates unnecessary barriers to entry. Similarly, the word ‘hardy’ used to describe open water swimmers also creates the impression you need to made from stern stuff to swim outdoors whereas it’s an activity that’s open to almost anyone.
Another word that should be outlawed is “freezing” for water that plainly isn’t. Freezing should be reserved for water at zero degrees (we might allow a little literary licence for temperatures in the low single digits) or if the air temperature is zero or less. We’ve seen it used to describe the water temperature in the Thames in mid summer. It’s just plain wrong and again mainly serves to discourage people from open water swimming.
For writers, those words (brave, hardy, freezing) are easy to slip into a piece of text (we’ve probably done it at H2Open before) but, I think, should be avoided wherever possible and reserved for where they’re appropriate. The language we use to describe open water swimming does shape how people view it. Let’s describe it in the right way. 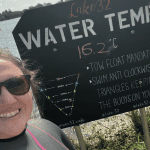 How can I keep my fitness levels in open water?