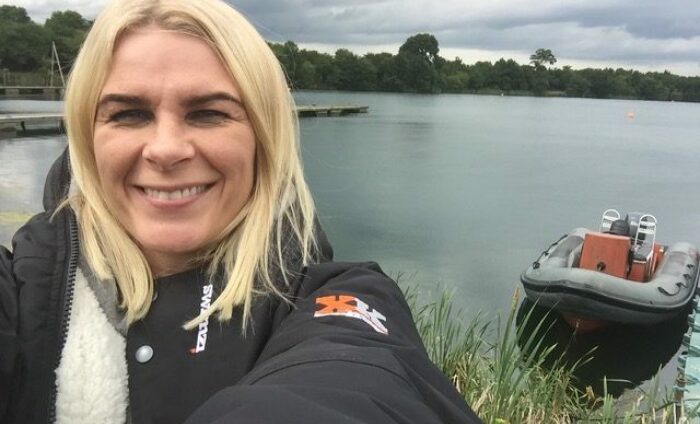 It’s fair to say that so far, having had the wettest June since records began, and a distinct lack of sunny days since, the weather has been a bit underwhelming, meaning the places I usually swim in have been notably cooler.

This hasn’t helped my training one bit. I’m a fair weather swimmer and with the Windermere swim very soon I don’t have the luxury of cherry picking the warmest days (of which there are none at the moment). I have to stick to my training plan, whatever the weather, and that currently means cold and wet.

My usual routine when open water swimming (get suited and booted, get in, get swimming, get out, get to the cafe) was not proving very effective in these conditions, and in all my swims recently I’ve just felt cold and uncomfortable.

After one such swim I took my cold, miserable, fed-up self to the cafe to mull over why. I watched fellow swimmers lining the side of the lake doing various types of warm up… And the penny drops – the reason for my poor performance had to be due to the colder conditions, and that I hadn’t warmed up before I got in. I needed a new pre-swim routine.

So I hit Google, and found out that the reason I’d been struggling was that (there’s far more science involved than just my next basic sentences) when you swim in cold water the heat loss from your skin can be far, far greater than in air of equal temperature (water is a much better heat conductor than air), and that swimming in cold water actually increases the heat loss further.

Basically, the body just doesn’t respond well to cold water and actually a pre-swim warm-up is far more important than I had realised. It won’t only make sure that I’m limiting my chances of injury, increasing my performance and just generally having an enjoyable and warm swim, it’s actually potentially life saving!

On the back of my newfound knowledge, I set to work thinking about my own warm-up. With my limitations I needed one that took this into account (being hyper mobile is so annoying!), which realistically means mainly a passive and waterless warm up. I began by thinking about my earlier people-watching and their different routines.

Some were stretching and jumping around. Some in wetsuits, others in their swimwear (I’m not one to be offering sartorial advice, however I can say with certainty that the Lord of the Dance pose should never, ever be attempted in Speedos!) and there were some very impressive, yet tricky looking exercises that looked far beyond anything that should be attempted by my very inflexible self without needing the emergency services on speed dial!

Some wore warm looking swimming coats/parkas/jackets, and either were doing various dynamic stretches or having warm drinks. I’m thinking this looks far more appealing, and warmer, than swimming costume yoga!

Others were jogging barefoot (on a lakeside where geese reside?). I thank my lucky stars that I am officially not allowed to run/jog/go faster than a standard walk (doctor’s orders) but I can see why they would (I probably would too if I’m being honest, even with the goose poo!). What could be better to raise your body temperature, elevate your heart rate and get your circulation going? However in my case, it’s just not an option.

I am a 100% non-expert, but I don’t think you need to be one to work out that warm-ups work. They all go some way to raise the heart rate and get the blood flowing, and most people (with the good sense I seem to be lacking) have adapted their pre-swim warm-up to suit their own needs and preferences. I need to do the same. I need to be able to raise my body temperature without the exertion. Realistically it’s going to have to be the warm clothes and a swim coat (and coffee) option for me (I don’t need asking twice to go shopping, and it will actually be an essential, possibly lifesaving, piece of kit).

And so in conclusion: after feeling a bit hacked off with my idiot self last weekend, this week, thanks to my warm-up, I felt comfortable, warm, relaxed and pretty smug. Despite it being a lengthy and chilly eight-mile swim, it was great. My warm-up included a brisk short walk, windmill arms and some stretches, none of which were performed in a swimming costume, but in my cozy swim jacket, and drinking cappuccino (although not at the same time) had worked an absolute treat!