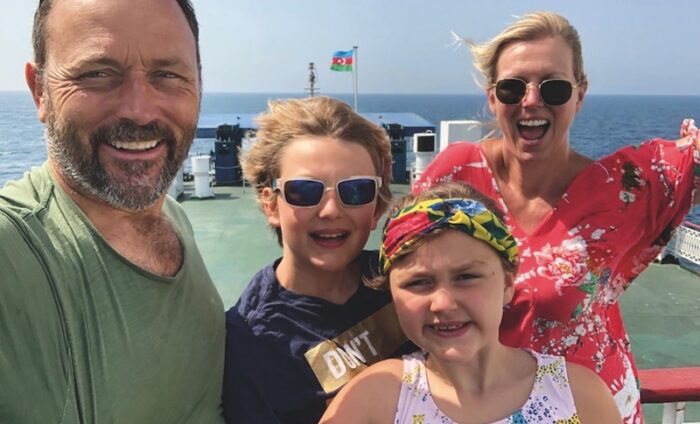 Simon, Lou and their two children, Clancy and Dixie

Some two months ago, I along with my family left our home in Brighton, England to travel to Kazakhstan by car and swim in open water every day. In the last issue I outlined our travels from the UK through to the tea terraces of north-eastern Turkey on the Black Sea coast.

The waters of the Black Sea had been our constant companion for a week as we hugged its southern shore. The name Black Sea was something of a misnomer as we swam in its clear waters throughout our journey east.

Our first stop after Turkey was Georgia, home to the coastal region of Colchis. As a Greek mythology fan, I was interested in visiting the land of the Amazons, formidable huntresses who scoured the waters for their prey.

On crossing the border between Muslim Turkey and Orthodox Christian Georgia, we noted significant changes. Islam gave way to Christianity and the people became somewhat harsher and forthright. The standard of driving also seemed to take a significant downturn!

After reaching Georgia’s main coastal city of Batumi, we headed east and into the Caucasus Mountains which sweep between the Black and Caspian Seas. Lakes are dotted along the higher reaches and made excellent swimming spots. Lake Zhinvalli, two hours north of the capital Tiblisi was my favourite such location. Bathing in its waters below Ananuri Fortress was idyllic.

Following Georgia, it was then time to continue west and on into Azerbaijan. Swimming opportunities were fairly non-existent as we passed east along the extensive arid lowlands which continued from the Georgian border to the Caspian Sea, the world’s largest inland body of water.

On first sight we could make out oil rigs along the horizon, a constant reminder of the significance and impact that oil production has had here. In fact, Azerbaijan’s capital Baku is testament to this as it is commonly referred to as the architectural love child of Paris and Dubai. Our whole trip along the Western Caspian, the focus was definitely on either bling in the case of Baku or oil in the case of most else. We never saw anyone else swimming and had to plan to get to accessible spots.

On arriving at the Caspian, our next aim was to get across it and even though SwimTrek’s motto is “ferries are for wimps,” at 260km, I had to accept that in this case I was one of them. We managed to get a ride on a commercial freight ferry which took 20 hours to cross over to Kazakhstan.

On arriving into the Kazakh port town of Aktau, our target had been realised and we swam in the waters of the western Caspian. Here beaches proliferated and swimming was definitely part of the scene. We all wallowed as we reminisced about the journey behind us and what we had completed.

If you like the idea of pioneering adventure swimming holidays, check out swimtrek.com