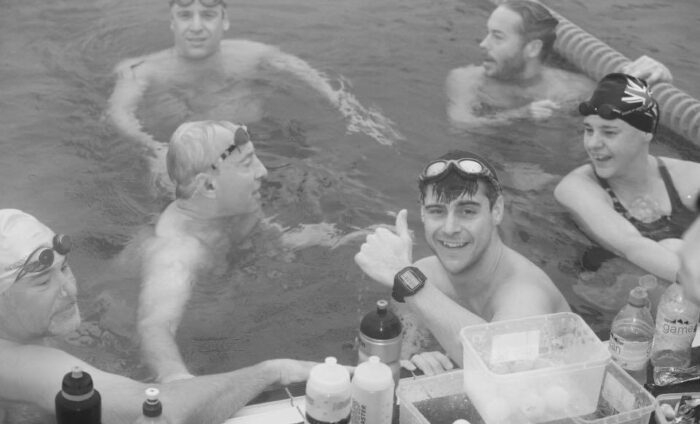 Towards the end of 2015, a bunch of guys gathered at Charlton Lido for that long-distance swimmers’ classic, 100 x 100m. A few months later, one of those swimmers, Steve Wand, was dead. He died in a cycling accident when a van pulled out in front of him on a fast descent. His friends called the air ambulance but they were unable to save him. Steve was 58 when he died, just short of his 59th birthday when he planned to retire.

Steve came relatively late to endurance sport after quitting smoking in his 40s but he embraced it wholeheartedly. His friends say he didn’t have hobbies, only passions and obsessions, which is something many swimmers can surely relate to. As well as sport, he loved vegetarian cooking and travel. I didn’t know Steve, but from the way people speak of him, it sounds as if he was an inspiration to many.

To honour Steve’s memory, Mark Sheridan decided to recreate those 100 100s on 17 December this year. Not only did he drag along Steve’s friends from the 2015 swim, he went out to the open water swimming community and ‘invited’ around 30 other people to join in. I write ‘invited’ because what Mark actually said was: “I am organising a memorial swim from Steve Wand. You will be there.” So I was, and I was proud to take part in what was a wonderful demonstration of the swimming community coming together to celebrate the life of a fellow swimmer and also to raise funds for a good cause. So far, nearly £3000 has been collected for the Kent Surrey Sussex Air Ambulance.

As for the swim, the first thing I have to say is that Charlton Lido is a wonderful facility. It’s a beautiful 50m heated outdoor pool in South East London. The staff were fantastic and fully supportive, allowing us to take over four lanes and we had around 10 swimmers in each. With Oliver Wilkinson (Manhattan Island Marathon Swim record holder) and Dan Bullock (founder of Swim for Tri and UK masters national open water champion) leading the way, there was no messing around and we cranked out the 10km in just under three exhausting hours.

After the swim we shared a vegetarian chilli, one of Steve’s favourite recipes, and Steve’s family presented everyone who took part with a medal as a memento of a swim that was definitely a lot more than just a swim.