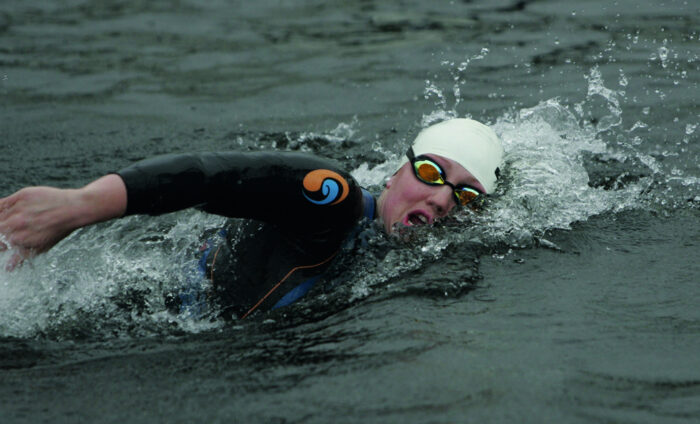 As the winter approaches fewer of us are braving the cold and heading out into the open water, preferring the warmth of the pool instead. On my last sea swim of this season I was chatting to some swimming friends and we got on to the somewhat contentious subject of wetsuits and skins. Swimmers tend to have strong views about swimming kit in open water and a lively discussion ensued.

Bob, an experienced open water swimmer with relay and solo Channel crossings to his credit, is a firm advocate of skins. Following in the wake of Captain Matthew Webb who successfully swam the English Channel in 1875 wearing only a pair of red trunks and smeared with porpoise oil, many have attempted to swim across the Strait of Dover to France. The rules state that a swimmer must wear one swimming hat, a pair of goggles and standard issue swimming costume. Duck fat or lard used to be liberally applied to skin but now Vaseline is favoured, not to provide insulation but to prevent chafing. In order to have the swim officially ratified there can be no neoprene. ‘That’s the way to do it’, according to Bob, who turns up for a swim with his trunks and goggles rolled up in a towel tucked under his arm.

Helen was in total agreement with him. She swims competitively and states that ‘real swimmers’ do not wear neoprene, that swimming competitively should not be about technical equipment. Instead it should be about a swimmer’s performance and their hard work. There is an artificial advantage provided by wetsuits as they offer more warmth and buoyancy. When I was swimming competitively in open water we only wore swimming costumes, even in the chillier waters of the UK. The Great Swim Series was the exception as it was sponsored by wetsuit manufacturers. It also provided a level playing field as many of the competitors were triathletes who would always wear a wetsuit. I hated racing in a wetsuit as I found the older versions very constricting around my shoulders and neck.

Adam, who had been sitting quietly, suddenly declared with a big grin that he was sticking to the ‘dark side’! Adam can be found in the sea all year round and in all kinds of conditions and always in a wetsuit. When the water temperature drops he wears two hats, gloves and booties. Neoprene slightly restricts his swimming style, but that is outweighed by the increased amount of time he can spend in the water, time spent swimming and exploring. James endorsed Adam’s viewpoint but also added how sometimes he enjoyed feeling water against his skin, being immersed and connected to water giving him a greater sense of freedom. However, James did add that abandoning his wetsuit only happened on rare occasions when the water temperature was above 17 degrees.

I have spent some time recently in Ireland and swam with a great group of swimmers who I have become good friends with, and I love the constant banter they give each other on whether they are going to swim in a wetsuit or not! I got the mick taken out of me and called a softie southerner as I have lost the ability to swim in cold water, much to my humiliation as I used to pride myself on not even shivering after 10km in 13 degree water!

Becoming used to swimming outside without a wetsuit takes time

Becoming used to swimming outside without a wetsuit takes time – time to acclimatise and build up resistance to the cold. A good idea is to take off your wetsuit at the end of a swim and stay in the water a little while longer. This extra swimming time in just a swimsuit can be gradually increased, as you become accustomed to the conditions.

Despite some raised voices it became clear that we were all in accord that it was swimming and the love of swimming that matters. There are all kinds and types of swimmers just as there are all kinds and types of technical equipment to aid swimmers. And if a wetsuit gives a swimmer confidence to enter open water then it should not be disregarded. After all, the most important part of swimming is enjoyment.