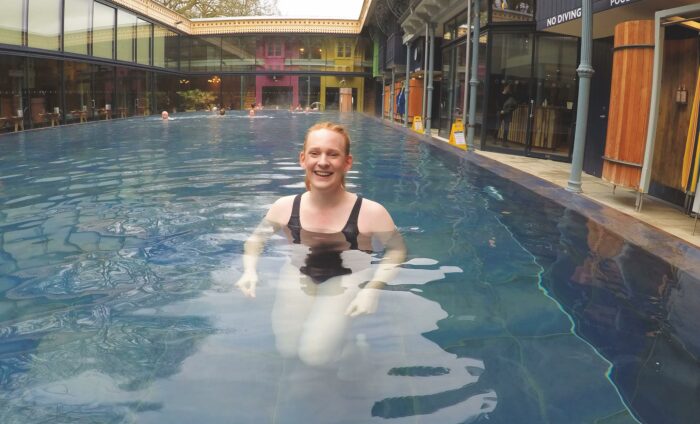 “I was a bit nervous when I first starting swimming with a group, I wasn’t sure what they might think,” says Eden Elgeti. “But literally nothing happened, everyone has such different body shapes it makes no difference.”

Eden is a transgender swimmer from Reading. We meet at the Thames Lido where she is a member and swims regularly. Eden also swims with the West Berkshire Open Water Swimmers, plunging into the Thames around Streatley and Basildon. Despite learning to swim when she was four and socially swimming during school years, Eden hadn’t actively swum for years. When the Thames Lido opened in 2017 Eden rediscovered the joy of swimming. “With the changing rooms at the lido the way they are and being transgender, it took the worry away from swimming,” she says. “So many local facilities are single gendered and can be uncomfortable. I love it here, there are no lane ropes and I can do what I want. It got me back into swimming and looking after

Eden transitioned at the age of 19. “I felt like the gender roles being placed on me didn’t really suit,” she says. “I started to explore this and asked my friends and family not to apply gender roles or stereotypes to me. I discovered more people who thought like me and learnt more about transgendered people. When I came out everyone was really supportive. From that day I was Eden, I was going to finally be me.” Mentally it was a quick step, Eden became who she always had been, but medically it has been slower and more complicated. “My nearest gender identity clinic is in London and there is a two-year waiting list,” she says. “I knew it would take time, but I felt like I had to portray this cisgender female stereotype to get what I wanted.”

After 18 months Eden began hormone replacement therapy, taking oestrogen. Eden describes it like going through puberty again. “There is a big emotional upheaval and it is physically draining, but you get the validation of your chest growing and body shape changing,” she says. “Every three months I go for blood tests to see if I am living as my body should. I am at higher risk of breast cancer and liver failure, but it is nothing compared to living the way I was.”

Eden was waiting for surgery when she started to think about having a family in the future. “I realised I wanted the chance to have children, and it would be nice to have my own,” says Eden. She then made the difficult decision to put her transition on hold, come off the oestrogen and put sperm into storage. “Mentally it was the hardest thing to get through,” she says.

Swimmimg to switch off

It was at this point that Eden discovered outdoor swimming. The Thames Lido team allowed Eden to suspend her membership while she concentrated on medically preparing her body to become fertile. “The lido team were so supportive,” says Eden. “But not having the lido is what got me into the river. I had got into the habit of swimming and I needed to keep going. I started swimming in the Thames around April 2019 and just kept going as it got warmer. I discovered a community of swimmers and connected with them. Soon I was swimming almost every day and on Sundays with the group. I swam to switch off and exercise during that difficult time. I used to just get into the river and swim hard for as long

Today Eden is back on her transition journey. “I love being me,” she says. “Which is a weird thing to think or say. But being seen as me and in a place where I am confident with how I present myself like any other cisgender female just makes me really happy.” Eden is now leading the swimming club at her work and has ideas for personal swimming challenges. This summer she will be swimming the Henley Swim Club to Pub, around Brownsea Island, a Slow swimming event and heading to Slovenia with SwimTrek. I think it is safe to say, like so many of us have, Eden has found her tribe in outdoor swimming.

Orca: the apex predator of all the seas

RNLI on the lookout for new beach lifesavers