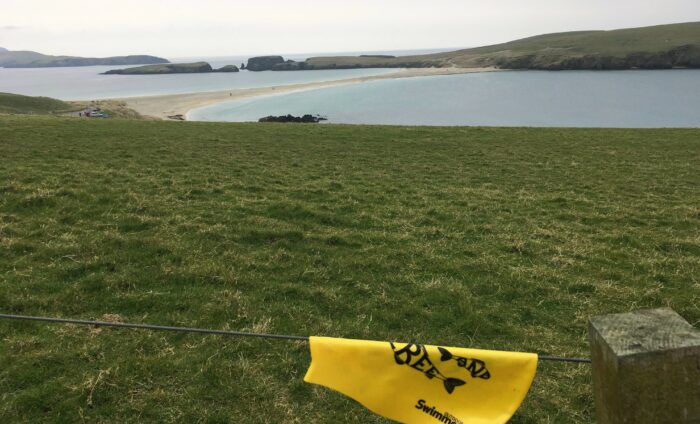 This post is dedicated to my Dad, Barry Greenwood, who following a 13-year struggle with Alzheimer’s, passed away the day after my trip to these islands. I was unaware that he was so close to leaving us while I was swimming in places I knew he would love. He was in my mind as I looked across the beaches, cliffs and moors. It was just the sort of place he would have loved to be, and he would have been so proud of my swimming. As I was growing up he showed me his joy of the outdoors and we shared experiences in my adulthood for which I am truly grateful.

Following an excited embarkation onto the boat for my surprise birthday trip courtesy of my ‘number one fan’ I started to research places where I could swim once we arrived. News of our destination had been imparted to me in time to make sure I knew which swimming gear to pack for the climate and to make sure I was wearing my walking boots.

Tombolo is a word I had never heard before but once I found pictures and read about this unusual geographical feature, I just knew it was the first swimming spot on my list. As you come down the single lane road that overlooks the bay you are treated to the vision of the water which is so clear and is separated by a thin double sided arc of sand that links the mainland to a small island. The beach to the right as you face it looks north and the other to the south. Obviously, I could not only swim on one side, I had to test both. Oddly, and I have no idea if this is accurate, I am sure that the water on the north shore was colder… or maybe it was because I was lucky enough to experience cold water shock only on my first entry. The south side was calmer and had a steepish shelf not far out. The beach was almost deserted and of the few we had to share it with I was the only one in the water. Both bays are about 500m across so a good size for a decent swim while equally perfect for a quick dip. The small island attached is well worth exploring to warm up afterwards as it boasts some amazing cliffs and vast, almost stalagmite shaped rocks peppered around the far side of the south bay. From the water you can see the cliffs curving round with sharp edges topped by the spring green of the grass.

The only annoyance I had with this swim was that after I had got out and changed an unusually shy seal made an appearance, so I didn’t get the excitement of swimming with it as I have with others in the past.

While there, I contacted a local Facebook swimming group to see if anyone fancied showing me their favourite spots. Sure enough, I was kindly offered a lift by one of the group to join a swim.

Before we get to that swim spot, I would like to digress. About three years ago you may have caught a BBC news story describing the experience of the woman who, during her daily swim, spotted an orca about 5ft underneath her as she made her way across the bay. As an open water or wild swimmer, however you choose to describe yourself, you will be all too familiar with that “what is underneath me” feeling we all get from time to time. Occasionally this is well founded. I can claim swimming with seals off a Coll beach circling me about a foot away, somehow circumnavigating the tendrils of a lion’s mane jellyfish (my worst fear) off Portobello beach and I’ve had the pleasure of encountering reef sharks in Thailand. Despite these experiences, I cannot imagine how terrifying it must have been spotting an orca, one of the ocean’s apex predators. I like to think orcas are intelligent and science certainly tells us that they are. They are beautiful sea creatures that are clearly being impacted by climate change to be found so close to shore, apparently something that has become much more frequent off these islands.

Anyway, you can see where this is going. As we were driving, I learnt that my companion for the swim was the orca woman herself. I certainly felt in awe.

The entry and exit point was not one I would usually go for as it was a rocky outcrop with the waves pushing and pulling at you. However, I was with someone who knows the area and I put my faith in my leader for the swim. The bay was deep and the swim about 1km at the most to the arched rock and back. However, with no real alternative exit points and with visions of circling orcas, I could have been a little nervous. Fortunately, a big seal appeared and shepherded us along, keeping a close eye on proceedings. Where there is a happy looking seal, I like to believe there is no orca. I have to say I was proud of this swim for two reasons. One, I wasn’t scared at all but excited. I kept thinking it was amazing I was swimming the same route my companion had taken on ‘orca day’ but I wasn’t scared. Two, it was my first half an hour in the water since before the winter. My only slight concern was the currents around the arched rock but I was confident in ‘orca woman’.

Would I recommend this swim, yes, would I do it on my own, no. But that’s just me.

I loved this trip. It was somewhere I have wanted to go for years. In a few days we only scratched the surface of what these islands have to offer. We saw otters (that was a really exciting experience), gannets, seals, heard skylarks and saw countless other birds I am yet to learn the names of… but no orcas. Phew!

My surprise trip was to the Shetland Islands. We stayed on Mainland where both my swims were and went otter watching on Yell. The first ‘double beach’ with the tombolo is the one that links Mainland to St Ninian’s Isle off the west coast. The second was in the bay on the south side of Lerwick.

You can reach the Shetlands by either sea (a 14-hour ferry overnight from Aberdeen), or air from Aberdeen and Edinburgh. As I didn’t book the trip and we took the more scenic boat I am not sure about flights from other locations. I am sure it is possible as tourism is one of the main industries for Shetlanders. Neither route is cheap but saving up for this is well worth it. The boat can be challenging given you are crossing the most open part of the North Sea but that’s all part of the fun.

Finally, a big thank you to the Selkies – Shetland Open Water Swimming Facebook group – for their welcome.

Read about Kate's other swims

A guide to Water temperature