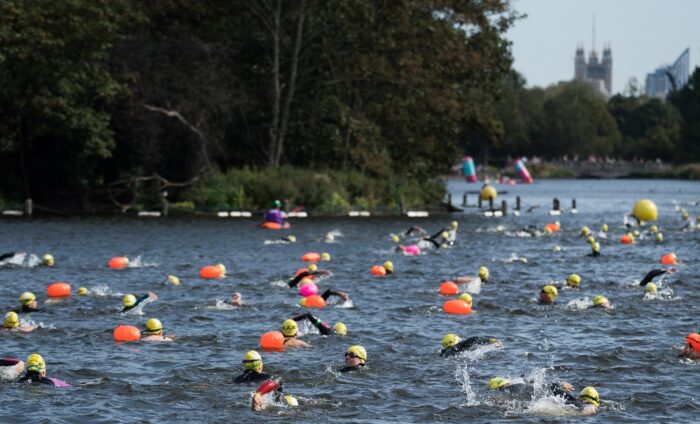 Last weekend I took part in Swim Serpentine, a new open water event on the UK calendar. It ran over two days, with a mass a participation (wetsuit or tow-float compulsory) 1-mile swim on the Saturday followed by the inaugural British Open Water Swimming Championships on Sunday. This was a 2-mile (3.3km) race under FINA rules, so no wetsuits. We were there for the entire weekend with a stand for the magazine and I also did both races.

My initial plan was to wear a wetsuit for the first swim but it was a hot day and in the end I couldn’t face putting one on. The water temperature was a comfortable 18 degrees too, so it really wasn’t necessary unless I wanted to be competitive. I intended to complete the swim at a steady pace to conserve energy for the following day so I didn’t mind that I would be slower because of not wearing a wetsuit. I managed to stick to that plan for the first half mile when another swimmer overtook me. I could see there were a couple of swimmers about 20 metres ahead so I decided I might as well hitch a ride and draft off the faster swimmer and see if I could close the gap on the two swimmers ahead.

It always amazes me how much easier it is to draft than to forge your own path and so with relatively little extra effort, with about 200m to go, I found I’d caught up with the swimmers in front, and from that point it was just too hard to resist sprinting to see if I could overtake a few more, which I did.

I got out feeling really good about the swim. I’d mostly stuck to my plan, I’d felt comfortable all the way around, I’d reassured myself that the water temperature wouldn’t be a problem for the longer race the next day and, although I’d sprinted at the end, I hadn’t gone crazy. I’d finished near the front of the wave and I heard one of the other swimmers saying his time was around 22 minutes, which would have been really good for my prospects in the British Championships the next day. Basically, I was feeling great and was all fired up for the subsequent 3.3km swim.

However, that all changed when I got home and checked the results. I found that I’d swum about two minutes slower than I’d thought and that my pace was way below what I knew would be needed to be competitive at the British Championships – more lethargic than steady.

Nothing had changed about my swim except that I now knew how long it had taken. I suddenly went from feeling good about it, to feeling bad, which is ridiculous if you think about it. I started to worry that I was over-tired, that my training had been insufficient or if I was getting ill. By the time I was on the start line the next day, I’d almost talked myself out of even trying. What’s the point, I thought, if I’m going to put in another poor performance?

I had to work really hard to think positive thoughts and block out the negative ones. My race plan was simple: try to stay with the race leaders as long as possible while concentrating on conserving energy for the finish by staying relaxed and drafting as much as possible. This is hard to do if you’re having negative thoughts, especially at the beginning of the race when the pace can be high and you’re not sure who your competition is and how strong they are. The way I suppressed the negative thoughts was to decide to do my best to keep up for the first 500m or so and then allow myself to review the strategy depending on how I felt.

Luckily I felt good after 500m and went on to have a great race, but I could have so easily given up before I started, just because I’d checked the clock the day before and found I’d swum more slowly than I thought I had. Instead, I should have trusted my gut feelings about that first swim, reminded myself that there are plenty of things that can affect your time in open water and therefore not worried about it. Or perhaps I shouldn’t even have checked the time at all.

In any case, why should you allow a set of numbers to change how you feel about an experience? I enjoyed the swim and came out smiling. Isn’t that enough?

How has the pandemic affected open water swimming venues?

Why some swimmers are wary of SH2OUT

Inspire the adventure: my life in outdoor books