We frequently observe a little friendly banter between triathletes and outdoor swimmers. As swimmers, we like to mock triathletes’ total dependence on wetsuits, their insatiable desire for new go-faster kit and their inability to complete a training set in the pool without sticking a pull-buoy between their legs.

However, it’s almost certainly the case that without triathlon, outdoor swimming wouldn’t be as popular today as it is. The development of wetsuits for triathlon has made swimming in natural water accessible to thousands of people who would never have considered it before. Triathlon also led the way in the creation of dedicated open water swimming venues and encouraging people to embrace swimming in lakes, rivers and the sea through their mass participation events.

In partnership with Zone3

At the top end, triathlon has produced some very fast open water swimmers so, for those of us that race in open water, it’s worth asking what we can learn from them. We therfore asked ex pro triathlete and Zone3 Vanquish wetsuit user Glen Gore for his top open racing tips. This is what he came up with.

I was in a world cup race in Sydney, way back in 1997, and the World Triathlon Championships that followed about a month after that in Perth. For Sydney, I had the idea of starting on the far left of the pontoon whilst the rest of the pro field huddled on the right. I figured that having some clear water to myself on the left would be a lot faster than struggling through the washing machine boxing match on the right. But, by halfway, I was trailing the field and came out third from last as I plunged back into the water for the second lap of the 1500m course. Fortunately, with a lot of effort, I managed to get back into the third pack during the swim and that was enough to move me up the field on the bike leg. Had I missed that pack, my race would have been history before it even started simply because I botched the swim start by standing in the wrong position. Four weeks later and I was lining up with Simon Lessing, Greg Welch, Chris McCormack and other legends of triathlon at the World Championships in Perth. This time I opted for the huddle on the right and figured I would gun it from the start and hope for the best. I managed to get myself in front by the first turn and eventually came out of the water in third spot, just behind Lessing and ahead of some of the best in the world.

The difference was not in how much effort I put in but in who I was swimming with. Like it or not, when you swim in a pack with faster swimmers, it’s almost like you are pushed into swimming quicker yourself. You also gain more self-confidence from swimming closer to the front of the field, and that often delivers faster swim times.

As a recreational rather than a professional swimmer, aiming to swim in the front pack might not necessarily work for you, but if you can position yourself with swimmers who you consider to be slightly faster than you, you may find yourself performing much better than you expected.

So, look out for a good starting position, it could shave minutes off your swim times.

Warm up before the plunge

You might have noticed that the professional triathletes and swimmers often go through a rigorous warm-up routine before the start of any race they participate in. That’s because they need to be geared-up and ready to go as soon as the gun goes off. Their heart rates will jump from around 70 to 160bpm in less than 50m. Without a good warm-up, their bodies will not be ready to swim hard from the start and, by the time they find their rhythm, the race leaders will be long gone. You never feel fantastically good when you first climb into a pool to start your swim training sets, do you? You need a couple of laps before you get into the groove and swim faster, right? The same rule applies to the races.

If possible, get in the water prior to the race start and swim for a few minutes. A couple of 20m sprints with some easy swimming in between should do the trick. We are talking a maximum five minutes in the water before you get out and wait for the start. I estimate you can save at least 30 seconds plus by warming up adequately before an Olympic distance triathlon swim of 1500m.

Clearly, at some events it may not be possible to get into the water and warm up, either due to the water being extremely cold or due to the race organisers and logistics. You then need to take along a set of rubber cords and do a dry land warm up with the cords where you simulate the freestyle stroke and loosen up the arms and shoulder. This isn’t the ideal, but it’s certainly better than no warm-up at all.

This sounds obvious and self-explanatory. However, you would be amazed at how bad many triathletes’ and swimmers’ navigational skills are when they plunge into the water. If you lack the skill to swim straight to the marker buoys, you could end up swimming as much as 200m further over a 1500m swim. That 200m extra swim distance can turn into four minutes or more added to your finish time. You need to be sure of the exact course yourself and not be content to rely on the athletes in front of you, hoping they will swim straight and you can just follow. Before the swim start, look for land markers on the route that you can use to navigate your way around the swim course, as these may be easier to see than the buoys. A good pair of goggles is also essential to ensure that your vision is not restricted. If your goggles do mist up or take in water during the swim, stop and take a few seconds to fix them, look up and make sure you are on the right line before continuing to swim. Practise swimming straight in training and try to work out your own optimum number of strokes between sighting in varying water conditions.

Drafting is a key skill in open water racing. Remember that open water racing is a head to head competition rather than a time trial, which means tactics such as conserving energy for a sprint finish can be really important. Drafting involves swimming to the side of another swimmer, and slightly behind, or following their feet. By some estimates, this can save you around 20% of the energy you would need to swim at the same pace on your own. With good drafting skills you can keep up with swimmers who are several seconds per hundred metres faster than you in the pool.

The optimum drafting position is usually either to the left or right of the swimmer in front of you. Position your head so that it’s roughly level with their knee/hip area. It does take some practice swimming so close to someone without actually hampering their stroke or yours. This position is preferred not only for the drafting benefit but also because it’s easier to sight and navigate from this position, and you’re in a better place should you decide to try and overtake. The second best spot to draft is behind someone’s feet. The disadvantage here is that if they are a powerful kicker, it can be an uncomfortable place to be. Also, you can risk annoying the swimmer in front if you repeatedly touch their feet. If this is happening, you could try moving slightly to one side.

You often hear the war stories after the race of how someone “just missed” the swim pack, and, had they managed to get on the feet, how much faster their swim could have been. They are not just talking big; drafting in the swim can potentially save them and you both time and energy.

If you were aiming to swim your fastest possible race on your own, in time trial format, the best advice for most swimmers would be to start steady and build your pace and effort through the swim. But in a race, there are different factors to take into consideration relating to points 1 and 4 above (your position in the pack and the benefits of drafting).

Quite simply, if you start fast, you’ve got a better chance of getting into a fast pack of swimmers for the entire swim. In a race, swimmers often break into smaller groups. If you want to perform well, you should aim to be in the fastest pack possible for your swimming ability. If you don’t start fast, you often end up swimming with slower swimmers. This is especially true in shorter events.

The problem with starting fast is that you need to train your body to be able to do it, otherwise you risk “blowing up” part way through the swim. To combat this, you need to simulate race pacing in training and open water swim practices. So, on a longer training swim (say 400 or 800m), swim fast (not quite all-out sprint but close) for 50 to 100m, then settle into your race pace to allow your heart rate to slow, and then increase speed towards the end aiming for a final sprint.

Hopefully these five tips will help you perform better in your next open water race but remember that it’s no good just reading how to swim faster, you have to go out and practise. Good luck.

Take your training outside – week 2 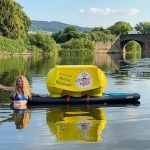