The Lake District is a beautiful spot. A National Park. The home of Scafell Pike, England’s highest peak, of endless natural beauty and the largest lake in England – Windermere.
It is a gorgeous spot to take a dip. Surrounded by rolling hills and picturesque backdrops, Windermere is as lovely a place to swim in as you could find.
After said dip, most sane people would get out, dry off and go for a warming local ale or lovely glass of claret next to a crackling fire.
However, for 2015 I will not be in this group of sane people enjoying everything I just mentioned but a smaller group of the insane who have decided to forget all of this and swim the entire length of Windermere, 10 miles or 16km.
Most people I have told about this have scrunched up their face and said something along the lines of ‘I couldn’t imagine anything worse!’.
Fair enough really. It is an odd decision to swim for between six and ten hours (closer to the latter I imagine!), face down in a very brisk lake, with little or no open water swimming experience to fall back on.
Come to think of it, why am I doing this idiotic thing?
Well, I blame Doug Miller.
Doug is a friend who was looking for something challenging and water-based to take on. He was threatening to attempt the English Channel and was not far off putting all his eggs in this nigh-on-impossible basket until another friend, Jim Conway, talked him off the ledge.
Well, I say talked off the ledge but really he just talked him from one very high ledge to this, still pretty vertigo-inducing one. Then he made matters even worse by dragging me into it.
The fact that we compromised on a 10-mile swim is testament to the number of beers we had sunk. Fair play to the good folk who brew Black Sheep. They know what they are doing.
Us three merry men rapidly became seven as another pal, Matt Cox, entered the fray, to be followed quickly in by brothers Matt and Alex Blott then finally Alex Harrison completed the party.
A fellowship of fools.
To be honest though, everything is going better than hoped for, so far. Training is vaguely going to plan, the two lessons with Lido Mike have been very instructive, and joining the Windrush Tri Club is a good way of swimming with others and taking the pressure off one’s own mind.
Underwater headphones could well go on to be the greatest Christmas present of all time and the Wimbledon Better Gym the finest early morning practice spot ’til the Brockwell and Tooting lidos warm up.
And crucially, everyone seems to be getting into the spirit of it.
Training methods do differ though I suppose, in that some do it and others don’t!
It’s great to be taking on this seriously challenging swim with friends though. It will provide a lot of fun, which I feel is definitely important.
The message so far is get the technique sorted and you will be more than halfway there. I am pretty sure there is more to it than that but I am happy to follow this simple message for now.
That is until my headphones break and I have to actually think about how stupid I am and how I will be spending more time in the water in 2015 than out of it.
Too late to turn back now though… 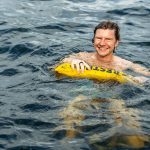