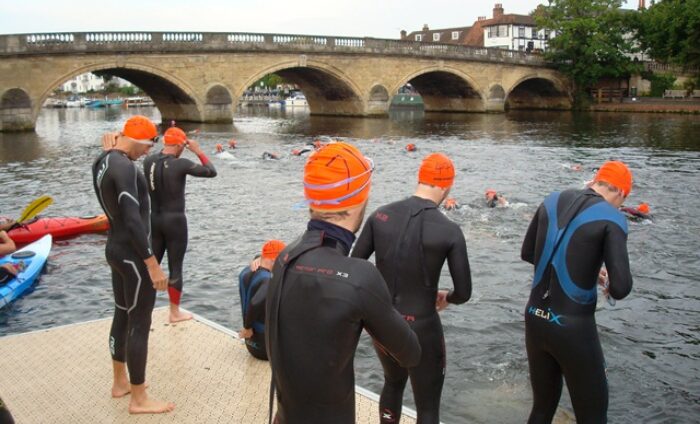 Adam Acland recounts his swim with the organisers of the Henley Swim Classic from Marlow to Henley along the famous and surprisingly scenic River Thames
I am not the most organised of people but this challenge was more last minute than usual. I’d only been asked 3 days earlier if I fancied the challenge of the Henley to Marlow river swim: 14km along, as I was to discover, one of the most beautiful stretches of the Thames. I had jumped at the challenge having never tackled this kind of distance before, but now, with only 5hrs to go, being a “Yes Man” did not seen such a good idea.
The challenge accepted there was no way I was changing my mind. I was looking forward to testing myself swimming a distance I hadn’t swum before in Open Water, having swum mostly 5km races and sea swims. So off I set, the sun rising on a lovely day, and only a few cars on the road to Henley, perhaps on the morning shift, maybe just finishing the graveyard shift, but in all likelihood quite a few more nutters like myself setting off to do this swim or some other madcap adventure.
I got to Henley with lots of time to spare and chatted with some swimmers who had also arrived early; little did I know I would be swimming this whole challenge with 2 of them: Mark Partridge and Jessica Wooddisse. I also bumped into a friend Kate Balchin and her partner Tim from Thames Turbo Triathlon Club, so the six of us set off to the river. We wrestled into our wetsuits and helped each other putting on some anti-chafe, something I’d be very glad of 13km later. It was then time for the swim briefing. The message here was the swim was not a race but a challenge. We were instructed to stay in groups and those groups would be decided after the first 4km. Seeing everyone collected for the briefing it was amazing to see quite a few were braving the distance in just trunks and costumes as if 14km wasn’t enough of a challenge in itself.

Not long later we were in the water and lining up under Henley Bridge. There was a short period of calm anticipation before the claxon blew and we were off and swimming!

The river came alive in a thrash of bright orange hats and limbs. People were overtaking left, right, and centre, swimming over the top of each other in some cases. We were swimming in a mass of splashing hands and feet and I quickly lost sight of Kate after about 800m, but I quickly settled into a comfortable stroke rhythm. I noticed a group of swimmers hugging the bank and another group more midstream. I was a bit behind and between these two groups so I decided to up the pace and catch the group that were midstream. Now we were swimming it wasn’t cold at all, the sun was up and the adventure just beginning.
This river twists and turns, has both wide and narrow parts, and fortunately no river traffic at this early hour. On the near bank we passed a music festival and circus though I couldn’t tell you if the bands were any good. A couple of bystanders cheered us as we passed. Gradually the groups of swimmers thinned out and I settled into swimming with a group of four. Flipping over I quickly did some backstroke to check if I could see where Kate was but all I saw were lots of bright red hats swimming frontcrawl behind me. Continuing downstream the river forks and we stayed on the right side along a bend that was narrow and deep with lots of boats and just after this, almost unexpectedly, the first stop was upon us at a lock. We tacked suddenly into the bank and climbing out to calls of encouragement from people, we took some fuel on board in the form of power bars and lemon drink. At this stop we were assigned our groups, and I was judged worth to join the leading gold band.
On the other side of the lock I met up again with Mark and Jessica, and also the pink-hatted pace setter Matt Baker and a certain Oliver Wilkinson swimming with no wet suit, who it turned out had swum the Channel and whose next challenge was Manhattan Island 42km swim. We were joined by Richard Stannard commenting on Oliver’s “funky trunks”. Around 15 of us set off again into the river following the pink hat of the pace setter and lead canoe, hemmed in with a side and a rear safety canoe. We set off at a fast but comfortable pace and I was loving the fact we were altogether and speeding around bends, moving as one. It was a shallow stretch of river that had parts where you could touch the bottom. Matt was a good guide and led for the entire 14km.
At the next stop we crossed to the other bank near a lovely weir pool to top up our energy levels with more food and drink. Unfortunately one of our group had to stop and wait for a slower group at this stage due to cramp. I hope he was able to carry on but he was in a lot of pain. I know when it happens there is little you can do.

The next stage was along one of the most beautiful stretches of the Thames and into unknown territory to me both because I didn’t know this part of the river and because we were way past my 5km comfort zone. I still felt good though and was enjoying the camaraderie of a shared challenge. Ancient trees lined the route on either side of the river as they must have done for many hundreds of years and there were birds nesting and swimming alongside us. The day was perfect. With the sun now fully out it felt elemental, almost being one with the river as it twisted and swayed. On every breath and sighting there was another fantastic back drop with little hidden shallow river paths that boats couldn’t navigate. It made it swimming along even more special knowing this little gem section of the Thames was largely unseen except to canoes and small boats, and of course swimmers.

We maintained a good speed throughout and in time the river began to widen again with big houses on the banks. As we approached the next stop the group were a lot more spread out, everyone starting to feel the effects of nearly ten thousand arm revolutions. Also a good number were suffering chafing from wetsuits and had missed spots to grease up which were now becoming painfully obvious.
Too soon we reached the penultimate section: a short 2km hop. However, fatigue had really set in know so I concentrated on staying in the zone and with the group, and the only thing I can remember was swimming towards a big boat that seemed to be coming straight at us but turned out to be stationary. As we passed it we crossed over to the other side of the river again under a small foot bridge and out of the water at the final lock to make our last stop before the final stage. 12k down, 2 to go.
We were all in good spirits and joking about sprint finishes. Some were definitely not joking and some were spinning bravado about swimming the last stretch fly. The fly didn’t happen. An experimental burst revealed the damage that 12km swimming does to your arms. Still, the pace began to pick up with Matt pushing ahead closely followed by two others and Jessica, while Oliver and I hung near the back. Half way to go Oliver had somehow worked his way to the front and was swimming in a chain of 5 swimmers. I was chasing the chain but struggling to stay in touch. I looked behind and saw the pace increase had spread the group out far back and I realised I couldn’t feel my arms. The final bend came in sight and Marlow Bridge stood there almost calling out for us to sprint to the finish. Oliver and Matt rose to the challenge, with one other guy just behind then Jess on his toes. I was trying to stick to the brief – i.e. stay together – but I’d meet my match in that last sprint. Oliver and Matt came in first with a time of 3hr 20mins exactly, with Jessica in fifth place and me sixth, 15-20 seconds behind. Then the rest of our group crossed the finish line. The silver group came in shortly after. Meanwhile, the bronze group had split so were four groups altogether. Everyone had done an amazing job. We all congratulated each other on sharing such a great event.
I then retraced our journey, this time by ferry, past an old school house converted to a home by the Sultan of Brunei, and a Red Kite with its forked tail circling in the sun. The journey back took longer than the swim, mainly in negotiating the locks, but it was a nice slow way to return and get a perspective on the swim. I can’t recommend this swim highly enough. In 12 years of open water swimming I found this event to be my most enjoyable open water swim to date and would recommend it to any swimmer who is up for a challenge to have a go. A big thank you to all the organisers and volunteers and everyone who made the swim happen and helped to make it such a fantastic experience.

How do I best structure my training for a 5k swim?