Have you even been somewhere on holiday, spotted an island a short distance from the coast and asked yourself, “I wonder if I can swim there”? Colin Smith, while on holiday recently in Thailand, did, and then decided it to answer it. This is what happened:
Whilst on holiday in Phuket, Thailand, we (myself and friend Graham) found ourselves relaxing on Kata beach planning our next local open water swim. Having already completed many 1-3 mile swims along the shorelines of Phuket we wanted something a little more challenging. Staring out into the ocean I said, “what’s the chance of us making it to that island out there? It only looks like half a mile or so.”

“No way,” answered Graham, who, incidentally, is a much more experienced open water adventurer than I am. “It’s at least a mile.”

We are (and were) well aware of some of the potential dangers involved including the occasional stinging but rarely lethal (so we had been told) jellyfish which we were always looking out for, the forever present (in my mind anyway) threat of hungry sharks, rapidly changing weather conditions and the ever changing rip tides and currents.
The conversation went back and forth until we concluded the only way to answer the question was to try the swim.
Before you think this was a drunken lark sure to end in tragedy, be reassured that we took our safety seriously and put a number of precautions in place including:
Leaving friends on the beach to watch us through binoculars for the entire swim.
Agreeing rescue plans if we didn’t reach the island within 1 hour, which included hiring a jet ski.
Towing a bright orange safety aid for both visibility and to have something to rest on in case of exhaustion or cramp.
Using a wetronome to set a sustainable cadence of 50 strokes per minute we started out for the island, swimming perhaps a little closer together than usual, and 30 minutes later, elated, we arrived.
After a short rest we gently eased ourselves back down over the rocks and into the sea (this was no time to slip and sprain an ankle even though we are both paramedics) for the return journey.

However, it seem became apparent this wouldn’t be as easy as the outward leg. After about 20 minutes we seemed to be making little if any progress and so paused to discuss our options. There was now a definite current that hadn’t been present on our outward leg due to the tide turning. Returning to our starting point was no longer going to be easy so we decided to head for the nearest outcrop of rocks, about 600 yards away. We were both slightly unnerved at this stage, but also reassured that we had our safety measures in place.
After about 20 minutes of fairly concentrated swimming we could once more see rocks beneath us and so knew we were making progress towards the shore, although it still took another 20 minutes reach land.
So yes, we could reach the island (and make it back again to tell the tale) but the experience did serve to remind us that open water swimming should not be undertaken lightly. We considered naming the island “Colin and Graham island” but then discovered is has been called Pu Island for many years. 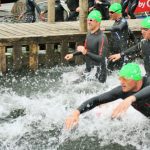