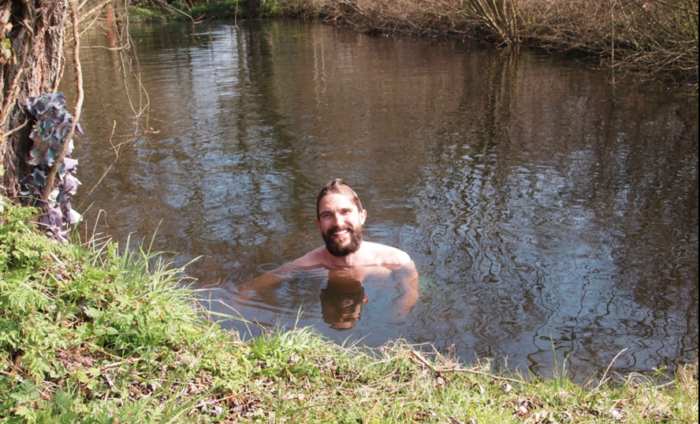 When Joe Minihane admitted to issues with anxiety, he turned to Roger Deakin’s swimming classic, Waterlog, for help. So began a long journey to retrace Roger’s dips, which has culminated in Floating: A Life Regained, his own book about wild swimming in the UK. Here he talks about his first swims and his attempts to recreate the classic ‘swimmer’s journey through Britain’

There’s a calmness in open water that’s impossible to find elsewhere. It’s down to the very ‘nowness’ of the moment, its simplicity. Move your arms, kick your legs and you’ll stay afloat. Nothing else matters.

I discovered this feeling on a hot summer afternoon in the mixed pond on Hampstead Heath. Until then, the only outdoor water I’d ever swum in was the sea, and then just a cursory few strokes before heading back to a beach towel.

What I found that day was a sense of presence and stillness that I didn’t realise I’d been searching for. My issues with anxiety were ones that I hadn’t owned up to at that point, but I lived in a world where worry was constant. It was stressful, tiring and hard to escape.

I began swimming at Hampstead regularly, whether it was cool and cloudy or searing hot. I loved the silky quality of the water and practised hard to improve my average front crawl and breaststroke. I wanted to stay in for as long as possible and maximise the post–swim dopamine high.

Wild swimming became an obsession. As a journalist, my insatiable curiosity led me to read up on the best places to swim and the people who shared my interest. Inevitably, that took me to Roger Deakin and his seminal Waterlog.

Deakin, who died in 2006, published Waterlog, his ‘swimmer’s journey through Britain’ in 1999. It became a word-of-mouth bestseller and an instant classic. Steeped in anti-authoritarianism, Waterlog was and is a call to arms to those who love nature and the outdoors, to protect it, to be part of it and to cherish it.

I adored both Roger’s message and his approach to travel. And so, I decided on a whim to try and swim in his wake. I set up a blog, Waterlog Reswum, and began the long attempt to swim everywhere he had gone.

As I began, I realised that this worked as a cure to ease off my overclocked mind. I took dips in spectacular bays off of Bryher in the Isles of Scilly, long swims in canals in northern England and descended narrow gorges in the Yorkshire Dales with a sense of trepidation and elation.

Swimming wasn’t the panacea for my anxiety. I needed professional help to make myself truly better and centred. But going for a soak in cold water was undoubtedly the way I recognised and admitted that I had a problem.

Floating: A Life Regained, the book that charts my swims, was the direct result of what turned into a two-and-a-half-year voyage of discovery. I can honestly say that I have never enjoyed anything as much as following Roger Deakin. A visionary, an eccentric and a superb writer, his work helped show me that swimming could help make everything better.

Cropthorne Water Mill at Fladbury on the River Avon was a private affair, and I’d been invited to swim there by the owner, George, after I’d done some detective work, found his email address and written to him about my trip. His cousin Judith had asked Roger down in the 1990s having seen one of his newspaper articles on wild swimming.

The Environment Agency had seemingly wanted to go to war with Judith’s family for having the temerity to paddle in these waters. A letter spoke of the ‘considerable risks’ of jumping into the Avon and the need to ‘take children to a local swimming pool instead’. It clearly hadn’t deterred them.

George and his son John, who had collected me from the train station at Evesham, led me down to the river from the road, ringing a bell and hailing the punt from the mill on the far bank. Attached to a pulley, it slid across the water, a huge group of fifteen swimmers awaiting our arrival on the other side.

It was everything I had hoped for. In my email to George I’d asked if I could possibly come down, snoop about and perhaps go on a long swim upstream. I had thought I’d be the only one taking to the water, pushing off and turning back for London within an hour or two. But already everyone had changed into their swimming kit, ready to join in. After the briefest of introductions to young cousins, grandparents and spouses, I was ushered into a back room of the mill to put on my shorts, before being led up into the living room on the first floor by John and his brother. I knew what was coming.

Roger mentions that swimmers here jumped out of the window into the Avon far below. But he doesn’t say whether he did it. It seemed I had no choice in the matter. John ushered me forward to look out of the window. I had thought it was a sheer drop out into the river, but there was a four-foot wide path skirting the mill which needed to be cleared first. John clambered into the frame of the window, which stood a few inches from the floor, stretched his long tanned arms backwards and catapulted himself out into the open. A huge splash and the odd cheer told me he’d made it safely. His younger brother James was next. He was fourteen and just a few inches shy of six feet. Gangly but extremely confident, he disappeared and emerged soaked and smiling. I tried to remember being his age, memories of failing to flop into the deep end during school swimming lessons once again resurfacing. If these teenagers seemed fearless, it was because they were.

George watched behind me as I moved up to the window and looked out. By now, everyone downstairs was watching, eying me gleefully for any signs of weakness. At that moment I wanted nothing more than to walk back to the river bank, slip in and swim away as fast as possible on a solo exploration. I closed my eyes, the faces of my old classmates gawping and jeering at my eleven-year-old self haunting the darkness. I couldn’t let my hosts down. I hung back in the frame, kept my eyes shut tight, began counting to three and jumped on two. I felt my legs wheeling and then disappeared into the green water.

I emerged gasping to a round of applause. John took my arm and helped pull me out, smiling. His long curly hair was slick across his face, his board shorts slung low.

‘You made it by about four inches,’ he said. ‘Good effort.’

I imagined my heels cracking on the edge of the path, my body sliding forward helplessly into the water. What if I had been the person to end the halcyon days of wild swimming here in Fladbury? I imagined the paramedics arriving, shuttling across on the pulley ferry, strapping me to a stretcher. I pictured myself with metal pins through my legs and wearing protective boots on both feet for the next year, a short article on the BBC News website remarking on my idiocy. George and his family having to sell up because of my poor jumping skills, never returning to a place that had brought them so much happiness. Years of anxiety had made me an expert at making imaginary mountains out of non-existent mole-hills. ‘What ifs?’ were my forte.

Once I’d let my overactive imagination work through this implausible scenario, I realised I was actually in the grip of an intense adrenalin rush. I had found my rebellion in jumping out of mill house windows.

by Joe Minihane is published by Duckworth at £14.99

Power up, power down – recipe 2