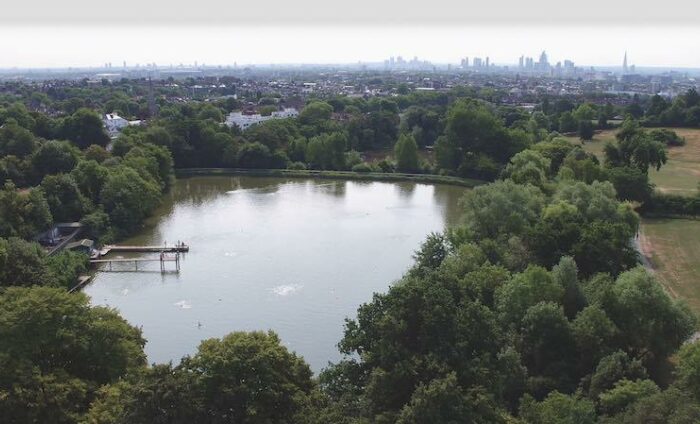 What makes people want to routinely plunge themselves into cold opaque water? Are they mad, or keeping sane in a crazy world?

An accident put Tom in a coma a few years ago. During his recovery from critical injuries, friend and author Al Alvarez (Pondlife: A Swimmer’s Journal) convinced Tom to swim in the ponds. “It had an immediate effect on my mood and outlook, and a substantial impact on my recovery,” he tells us. “Once you’ve survived winter swimming nothing can touch you – you’re superhuman.”

Tom is one of the founders of the East German Ladies’ Swimming Team, ironically made up of men and based at the Men’s Pond. It was her husband’s membership of this group which encouraged Carrie Longton to begin swimming throughout the year. “At first I thought he was mad. I was annoyed that he would leave me on a Sunday morning, go off and swim with a bunch of men. But that year I got terrible flu and he didn’t.”

We meet Carrie at the Ladies’ Pond. She talks candidly in the film about her double mastectomy. “I’d first been told I couldn’t swim for six weeks and then three months. My doctor just didn’t get it. I was like an addict. When I couldn’t swim I would go down and just smell the water.”She explains how she only agreed to reconstructive surgery after being assured that she could swim in two-degree water.
Caitlin Davies, author of Downstream, Taking the Waters and Daisy Belle, provides some historical background: “The ponds were regulated for swimming in 1880. Men got what is now the mixed pond and women were allowed in on Thursdays. In the 1920s we got the women’s pond. I have never found another in the world.” Carrie agrees: “There’s not many places in the world you can go on your own and not ever feel worried,” while another female swimmer describes the “sense of togetherness – camaraderie – because it’s something a little bit special”.

Swimmer after swimmer emphasises the positive effect on mental and physical health of cold water, a view which is gaining traction, despite some resistance from traditionalists. The swimmers are the subject of documentary film The Ponds – Still Waters Run Deep, filmed by Patrick McLennan and Samuel Smith. Director Patrick is a convert: “People still mock open water swimmers for following unscientific mumbo jumbo – if they only knew the feeling they’d get, they’d all be doing it.”

Tom Kearney agrees: “Before my accident I would be running on the heath and I would go past one of the ponds and think, why are these people doing this? Now in December I’m in the pond watching people run by and thinking – why aren’t you in here? The current zeitgeist is complex: people are constantly distracted from seeing what’s around them. I’m not religious but the ponds are a place of deep contemplation. Epiphany is baptism. Water, and cold water especially, does something to humans.” A swimmer with a degenerative disease tells us that: “Getting in cold water is an amazing feeling, everything is buzzing. I forget that I’m blind.” Meanwhile, a lady with chronic back pain declares that for at least an hour after swimming she’s pain free: “I can face anything once I’ve been in the water.”

A recurring theme is the equalising nature of the ponds. Dan Fawkes, a long-serving lifeguard, talks about: “The different characters I meet, who I wouldn’t normally rub shoulders with.” He adds: “Once you’re in the pond together it doesn’t matter what background you’re from or how well you’ve done in life.”

What inspired Patrick to make the film? “I had a good idea that a lot of people get physical, emotional, psychological benefit from swimming so I thought there would be some really interesting stories. All our characters have a pretty moving story to tell, but equally the ponds are about having fun and not everyone who goes there is recovering from a major crisis – some just go to have fun. I hope the documentary also gets over the pure childlike joy of jumping in.”

The film is a sincere and sentimental tribute to life at the ponds. If being in the ponds is good for your mental health, then this film is a vision of what sanity must look like. It reminds us that on a warm day, this is one of the nicest places to swim in the whole world. On a cold day you can test your resolve alongside some remarkable characters. You might even bump into Tom, Carrie or Patrick. What’s your story?

For details of where you can see the film visit: www.thepondsfilm.com