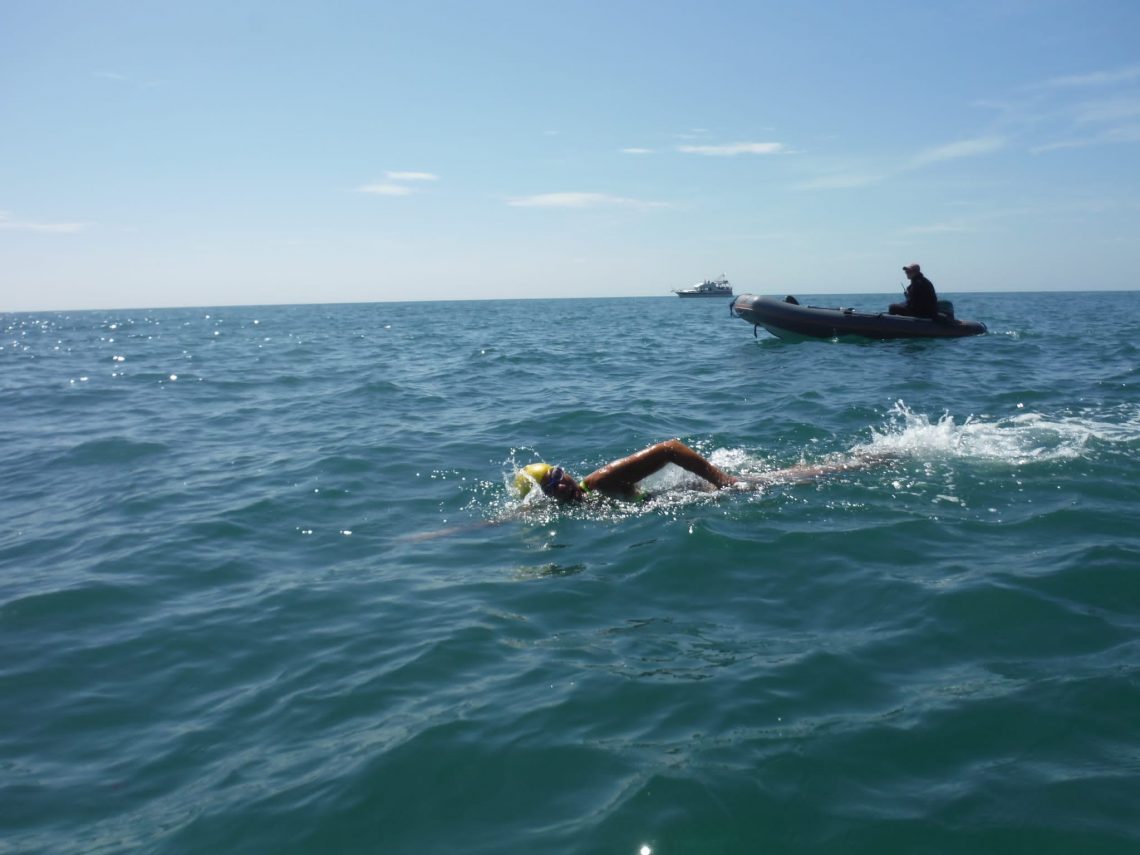 Mark Critchlow was registered Severely Visually Impaired in December 2011. Since then he has taken up outdoor swimming and completed five 4-person English Channel relays. When he was offered a chance to join a relay around the Isle of Wight, which is three times the distance of the English Channel, naturally he said yes.

(See below for more details of Mark’s visual impairment).

I was taking part in a 24-hour relay swim in Shepperton Lake when I met the Girls Alive group from Dorking. This great group of women take on various annual challenges and for 2022 had decided to swim around the Isle of Wight. However, for a few reasons, their team was becoming too small for comfort. We got on so well that I gladly agreed to join their Isle of Wight swim, along with another swimmer, Judith, who we met at a training camp.

So, we became a team of six, called ourselves ‘Whitehearts’ and were initially given a call to swim on Friday 29 July. But then, on the morning of Thursday 28 July, we were advised that the tides and conditions favoured at start later that same day! Now, I don’t find travel easy. Navigating with heavy bag in one hand and a white cane in the other is energy-sapping. I was going to be exhausted before we reached the water.

I started my journey by bus, then three trains, and finally the ferry to Gosport. It took more than five hours and I was drained. I find navigating through crowds and in stations and unfamiliar places challenging, to say the least.

I was met at the marina by Ellen, a co-pilot, who was helping on the event, and Pete, the main pilot. We boarded the ‘Channel Queen’ – our mother vessel for the swim – to be greeted by Chloë McCardel (owner of the Channel Queen, chief organiser and fellow swimmer) and Roy (our tide planner and safety kayaker). Over the next few hours, the remaining team members arrived: Esther, Daphne and Rona, all from Dorking, and Judith from Cornwall. Finally, and not least, was Caroline, the observer.

We set out from Gosport at about 9pm. The start was to be just east of Ryde at Seagrove Bay. Judith, our first swimmer, set off at 10:40pm, following the kayak, nicely illuminated by spotlights, between the moored boats. Daphne followed exactly 1-hour later, carefully swimming behind and then around Judith to ensure that there was no distance not swum. At this stage, the sea was calm with a following current and wind. We made good progress towards Ryde and just beyond.

Then it was my turn. I was to enter the sea directly from the Channel Queen. I found the sea conditions fine, but the lighting from kayak and boat was very difficult for me. I think the tiredness from the travel was also impacting on my ability in this respect. I’ve learned through experience to just concentrate on my swimming and trust the support crew to shout alerts and to help if necessary. Still, it’s not easy batting away fearful thoughts. I find focusing on some technical aspect to my stroke works best. This time it was the rhythm of my stroke, boosted by a triple kick every six strokes, while breathing bilaterally. I found that I had covered quite a distance with the current as we were approaching Cowes, but the wind direction wasn’t helpful and I caught a lot of diesel fumes. Memories of the Dover Harbour cocktail (sea water and diesel) flooded back, causing me to choke. But I have learned to regain control of my breathing and I was able to complete my turn.

Esther took over at 1:40am, and made great progress past Cowes. Conditions were still good with minor chop and swell, and a decreasing east-northeast wind. It was still dark and some of us took a chance to get 40 winks.

Rona took over at 2:40am and made fabulous progress. The wind had dropped further and changed to northeast. Then Chloe took over to complete our first round of rotations. Under the rules of the swim, we needed to maintain the hourly sections in the same order from beginning to end.

Dawn was breaking as we began our next round of swims. However, we reached the needles around 20 minutes later than planned. The current had built up and we were struggling, so a detour to ‘thread’ the needles was made. The needles offered some protection from the current, we got through and started our swim along the south side of the island.

At this stage, the wind changed direction from easterly to southerly. While the sea temperature was comfortable (at between 16 to 18 degrees throughout the swim), it was becoming increasingly difficult to swim against the current.

A lot of careful planning had gone into this. Chloë and Roy had extensively studied the currents and tides and accounted for the different speed of the swimmers. Therefore, this slow headway was predicted and we couldn’t do anything about it. At some points the swimmers were seemingly going backwards. We had to swim close to shore to minimise the effect of the current, while the Channel Queen had to stay some distance from the island to avoid submerged rocks.

When my turn to swim came around, I suggested to Peter, the pilot, that I would be throwing myself hard into the first 10 minutes of the swim to try to get around a headland and find slacker water. However, I found myself battling for the full hour to make reasonable gains against a seemingly impossible current. Our progress was much slower than on the first part of the swim and it was a matter of biding time and waiting for the conditions to change.

As we swam past Ventor and towards Shanklin the current was reducing, and our progress accelerated. Meanwhile, the shadows were getting longer and the wind a bit stronger. As I took over for my third stint, just past Shanklin, the sea temperature dropped to around 16 degrees. I didn’t mind; it’s probably my favourite temperature. I threw what I had left into this swim. The sun was bright but about to sink behind the hills in the background, and the light made it near impossible to calculate where I was relative to the kayak. I just carried on. As a visually impaired swimmer, I have to trust and know that the support team will keep me out of any danger. As I approached the headland near Culver Cliff, I knew that it would be my last swim.

Esther, Rona and then Chloe swum us into the dark and finally, shortly after 10pm, back through the moored boats to the same steps we’d started from where we were greeted by bright lights and applause from local supporters.

Hard work not yet over

My train and bus trip home was as tiring as on the way out. However, this time I was carrying a great sense of achievement with me. We covered a distance of 109km in 23 hours 35 minutes. While it was hard, I honestly can’t wait for my next adventure, which may be a swim along the Jurassic coast, a place special to me from my childhood.

Do the swim yourself

If you’re interested in doing either a solo or relay circumnavigation of the Isle of Wight with Chloë McCardel and the Channel Queen, contact Chloë on chloe@chloemccardel.com

The Nature of Mark’s Visual Impairment

I was born blind in one eye and had a full sporting life up until early 2000s, then started rapidly to lose field of vision in my other eye. Initially, I didn’t cope, and with chronic pain to go on top of this, my sporting ambitions went to zero. In 2011, I started to try and swim and managed 400m in my local outdoor pool. I was registered severe sight impaired in December that year and had a guide dog, Seiko, helping me from July 2012. From there, I set about challenging myself to lose weight, and improve my health and outlook. The difficulties experienced are mostly in travel to and from venues, while swimming is my freedom. The obstacles experienced in the local high street pose more challenges than swimming in open water.

My local pool some 25 to 30 minutes walk away. It was 20 minutes with Seiko. I swim confidently following the black line at bottom of the pool. I can’t tumble turn, I simply take one last stroke when I see the ‘T’ shape at the end of the black line and use the momentum to glide to the lane wall with my right arm extended and hand flexed to absorb the impact. This does get problematic when I swim my long session of ten kilometres doing 100 x 100 metres (4 lengths each). I develop soreness in my right forearm/elbow, but it doesn’t stop me from swimming.

During swim events, I initially tried tethered swimming with Sarah Larkham but it was so difficult and we got tangled swimmers at times despite being a good speed match using wetsuits.

I dropped the wetsuit as I grew out of it and preferred the freedom of swimming in trunks. I took lessons to improve my technique from super triathlon coach Julian Nagi. I swam with groups of swimmers in clubs in Dorset, beyond the Blue and East Dorset Open Water Swimming Club, seeking help via Facebook and other social media. They were all so welcoming and encouraging. I entered a 3.8km event in Dorset and asked the organisers if they could help find a guide swimmer for me. I was introduced to my best long-standing guide swimmer, Marc Newman, a FINA World champion in the past. With a guided swimmer, I breathe to the same side and have a rule: if I don’t spot the cap and have 3 misses then I stop and wait to reconnect. With Marc Newman it is relatively easy as he is swimming at 70% capacity and is able to easily adjust to my speed. I don’t often need to stop and locate with Marc, he is seemingly always there.  I don’t swim in the sea without a sighted guide. I once got ‘lost’ or disoriented in the sea in Spain one summer. It was a frightening experience as I didn’t know which way to head. Not something to ever repeat.

When swimming beside a boat I have developed a system of lights with Stuart Gleeson, a great English Channel pilot (Sea Leopard), that works for me. We place four coloured lights equally spaced, 50cm apart along the side of the boat. There is an orange light towards the front, two green ones near the middle and a red light towards the back. If I can see the two green lights, then I know I’m in the right place. If I see more than two lights, I know I’m too far away, and if I see just one, then I’m too close. The red and amber lights tell me if I’m too far to the front or back of the boat.

At various swim camps (Varne Ridge, organised by Tracy Clark, Dorset organised by Chloë McCardel) they often provide a kayak to accompany me. It is relatively easy to spot a kayak as there is so much above the water’s surface.

Marc and Chloe in particular have gone well out of their way to help me with my swimming, often driving me halfway across England to get to venues, providing encouragement by phone and invitations to swim. Such friendship and help is invaluable.

What I learnt from Vidösternsimmet 2019