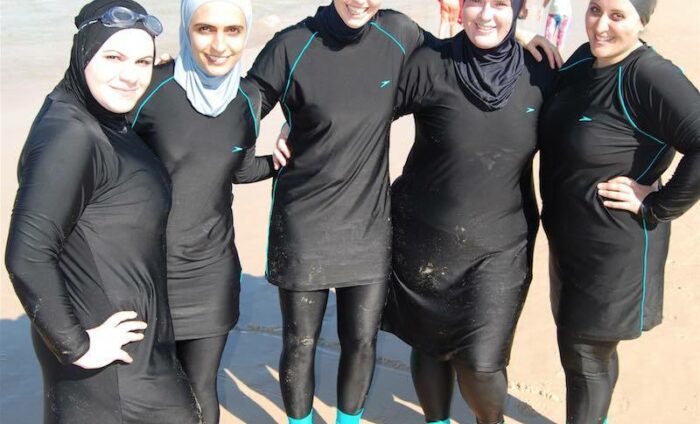 Full body suits are allowing a new demographic of women to take to the open water, discovers Becky Horsbrugh

Earlier this year a group of women took part in an open water swimming event at Sydney’s Maroubra beach. Nothing unusual in that you may think. Except this group of women were wearing full body suits otherwise known as modesty suits or ‘burkinis’ and it is believed to be the first time women wearing such outfits have taken part in an ocean race.

The women are part of a group called Swim Sisters, which was set up by Australian Yusra Metwally in 2016, in response to the ‘burkini’ ban in the South of France. One of the most iconic images of last summer was that of French policemen on a beach, telling a Muslim woman to take off her long sleeved clothing. The controversial law was soon overturned by France’s highest appeal court. However the ban lasted long enough to spark debate around the world over the rights women have to wear what they want in and out of the water – irrespective of their religion.

For Yusra, that debate showed her there was a need to try and change any pre-conceived perceptions on the wish of some Muslim women to cover up when they swim. When it came down to it they were just a bunch of women who like to be in the water. Her aim was to run a group that would inspire women from all backgrounds and walks of life, encouraging women to challenge themselves by embracing ocean swimming once they have conquered the pool.

The group’s first goal was February’s ocean swim event. The women trained in a pool and then at the beach at the weekends. On the day itself Yusra told me the support was fantastic. They didn’t need to get permission from anyone to wear their modesty suits as the attire reflected their religious choices, not their ability to swim. Though there were regulations on wearing wetsuits, the swimwear they were wearing didn’t fall into this. “It is still just Lycra material, we just cover a little more” as Yusra explained.

For all the women it was their first experience swimming in open water. However, the stronger swimmers are now looking at training towards 2 kilometre events and beyond. Since that February swim they have taken part in three more open water events. The majority of the women in Swim Sisters would never have believed even a few years ago that they could take part in long distance open water swims.

Muslim women who wish to cover up in the water have faced a number of obstacles in the past to swimming. Yusra told me she and many other women she knows stopped swimming in public spaces after putting on the Hijab. She recollected one experience where she was pulled aside by a lifeguard at her local pool and told her clothing wasn’t appropriate as it wasn’t Lycra material. That was enough to put her off swimming for years. Fortunately not for life as once she discovered a women’s only seawater pool locally, and then took some women-only lessons, she eased herself back into the water.

Yusra is one of thousands of Muslim women who want to swim but as she calls it, need to adapt their sports and swimwear “to accommodate their understanding of practising their faith.” Swimming costume companies and designers are finally realising there is this demand. Modesty suits are readily available online from a whole host of countries and range from very practical for swimming to turban styles with glamorous prints, to very loose and slim fitting styles depending on body types. Mainstream companies like Speedo now also sell their own Modest swimwear range, and last summer Marks & Spencer‘s ‘burkini’ hit the headlines in the UK.

The availability of such suits is helping to open up access to swimming but for some Muslim women who wish to cover up there is still the issue of confidence, and that is where groups like Swim Sisters can really help, according to Yusra. Some women are wary of standing out if they wear a full body suit. However, they have members who by joining the group have overcome that fear.

It’s not just in Australia either where Muslim women who wish to cover up are seeing opportunities open in the water. In March, Swim England announced it had changed its rules regarding full body swimwear in a bid to allow ‘more people to participate in events across England.’ Previously swimwear that covered the whole body was banned as it was deemed to have performance-enhancing characteristics. However that rule was relaxed following a request from the Muslim Women’s Sport Foundation (MWSF). The new guidelines state: ‘Swimmers who wear full body suits for religious beliefs or a pre-existing medical condition, are now able to compete in all Swim England licensed swimming meets and national events.’ The new guidance, which only applies to amateur competitions in England, states that competitors will not be allowed to wear any suit that a competition referee believes will increase performance.

Rimla Akhtar from the MWSF was one of the key campaigners for this rule change and she praised Swim England for its support. For her “It is a major move as it opens up swimming to a whole new demographic and I have no doubt it will inspire more women and girls to get into swimming and access the pathway available to them to competition.” Key to Rimla however is seeing changes on an international level as well “so that young girls can aspire to reach the highest levels of competitive swimming.” Rimla was keen to point out to me that of course there are female Muslim role models across sport, but this campaign was specifically about those who choose to cover. “With that we can see a diverse range of Muslim women represented and inspiring others.”

That issue of diversity is what I believe is key. Whatever people’s opinions are on women covering up in public life on religious grounds, there is a huge demand for appropriate swimwear for such women so they can participate in a sport we all love. Importantly, many women may also want to cover up for other reasons, for example to protect their skin from the sun. Or maybe they just don’t want to wear a skimpy suit. In the end if full body suits give no performance advantage, but allow a whole new demographic of women to enjoy the sport of swimming, their mainstream use should be celebrated by all.

The Swim Sisters participated in the MS 24 hour Mega Swim, an event that involves continual swimming for 24 hours. The group fundraised $3,260 to help those living with Multiple Sclerosis.

Out to swim: The transgender woman who found her tribe in outdoor swimming