There were four of us – Pippa Robertson, Michael Mellows, Lachie Kerr and myself – looking to take on the 19.7km from Cottesloe Beach to Thompson Bay, Rottnest Island. The rest of the team included our support boat skipper, two paddlers and the essential time-keeper.
Our first swimmer was in the water off Cottesloe Beach just after 07.35 and we planned to have our first changeover at around the 1.2km mark (earliest possible is 1km as boats can’t come too close). This was managed with reasonable accuracy and we settled into a temporary rotation of swimmers on 10-minute intervals to give our “off the beach swimmer” 30-minute rest. Thereafter we switched into five-minute rotations with an aim to keep an average pace a tick under 20mins/km. We ably hit this target until the halfway marker (10km) when the forecast winds from the southwest picked up to a fresh 20-25 knots gusting over 30knots. Given the swim is a direct east to west route a SW wind is almost the worst direction possible given there is also current/set at the Rottnest Island end which runs south to north.
As the day continued the swell grew and at its peak swimmers were contending with around 1.5m of swell plus 1m of breaking sea. We eventually came home around the eight-hour mark. We’d reached the half way marker in a little over three hours which shows just how much the conditions changed throughout the day.
Undoubtedly the pick moment of the day is the first pint at ‘Hotel Rottnest’ – the island’s only pub which also backs onto the finish line on the beach. With several thousand partygoers, including many swimmers, paddlers and skippers, it’s a carnival atmosphere which kicks on until the wee hours.

Without doubt sharks are a concern but oddly one that really only grips you during the training. It’s the 6am start on a lonely beach with perhaps just one other swimmer where you feel most vulnerable, knowing full well you are in the home of a few monsters, great whites and tigers to name a couple. On the day any fear is very much suppressed and replaced by huge waves of adrenalin and general excitement. For the swimmer off the beach the scene in front of you is a line of 1,500 boats stretching into the distance with swimmers and paddlers as far as the eye can see. For those waiting on board the support boat the atmosphere is electric, especially once you hear over the VHF that your wave has now entered the water and that your race is now officially underway.
This year, a 3m beastie was spotted at the 10k marker – bang in the middle of the pack. Thankfully nobody was harmed – we were at the 12k marker when it was spotted, miles away… Gulp!
Yet another brilliant experience and one I couldn’t recommend more for any keen open water swimmers. 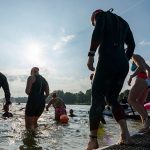