It seems somewhat of a coincidence that the British Long Distance Swimming Association’s Champion of Champions event fell on the Summer Solstice this year. Boy was it ever the longest day, but what a fabulous swim and how lucky we were with the conditions!

The event is a series swim. Basically, you get in the water for a five mile race and you’d better be out within the cut-off time, refuelled, back on the start-line and raring to go for the next – a meagre three-miler. Ditto, in you get, round you go, out you get and be ready for the final push. The last race is a baby – just a mile – but never underestimate the stamina and endurance needed to get through ite. By now you are eight miles in and you’ve been out of the water twice. It’s a bit of a tease: dry off, warm clothes, woolly hat, hot drink, cuddles from your support crew, lie down if you fancy. Sounds pleasant? Let’s just refer to the rule book and chuck in a few spanners. The BLDSA keeps swimming pure. Competitors ‘shall not use any aids to swimming other than one sleeveless and legless costume, one cap and goggles’. You’re allowed nothing that will enhance buoyancy or provide thermal protection, nothing that will give one swimmer the edge over his competitors. It’s a level playing field (or at least a level body of water) of man versus the elements.
With that in mind let’s have another look at that fluffy warm time off between swims and add to it: shiver, spill your tea, seize up, hit the deck, realise that your shoulder is wrecked, you’ve chaffed your armpits (or worse), and are verging on a melt-down. All are very likely, and reason enough for some to call it a day.
The Championship is decided across the three events: the person with the fastest aggregate time wins the title ‘Champion of Champions’. But even though it’s a race, all abilities and age groups are represented from the whippersnapper (how in the heck can you swim that fast?) to the “I can swim forever” plodder. All are athletes in their own right and are celebrated equally by the BLDSA.
21 June 2014 saw around 60 competitors enter the water. The sun was shining, the sea was flat and Dover Harbour was a whopping 16 point something degrees. On the horizon that evil temptress of the French coast was visible. I, and my good friend Lesley, came along with a four-strong crew. Ben, Wouter and Shaun provided kayak support while a land-based Vicki did the fluffy warm stuff that would keep our bodies fuelled and our heads in the right place. It was a bitter-sweet day for all of us, having recently lost our dear friend and partner-in-swimming-crime Tony Mellett, who would have been swimming with us that day. In Tone’s memory we took to the waters.
This was not a new distance for us. These were not new conditions. This was not an unfamiliar harbour. But in open water, especially over long distances, there’s always that one little thing that creeps in to mess with your game. You won’t know what it is until it hits. And when it does you will have to deal with it or it’s game over. This time for me it was cramp. It struck just as my sandals came off. Damn it! I hadn’t even put a toe in the water. When I did it was a hundred times worse. I did three miles of the five mile course with blooming cramp – both calves locked up with agonising spasms, swimming off just my arms and being merrily lapped by all and sundry.
I can’t believe this, I’m going to be pulled out before the first hurdle, I thought. Sorry team, sorry Tone, sorry me. But I’m not one to give in easily and sticking up for me against the defeatist thoughts were the more stubborn ones: “no way are you getting out” and “they will have to drag me out”. I certainly wasn’t the only one in trouble out there either and some competitors unfortunately had to retire.
As ever Lesley swam hard and fast, lapping me twice on that dreaded five-miler. She had no problems with the distance or keeping pace but she had her own head-monkey.
“I feel sick. I’m not getting back in for the three-miler,” she declared.
But we both responded to a message from above: “Shut up the two of you and deal with it!”
For me, kayak support that saved the day. Once I’d had a swig of isotonic and a suck on an energy gel it was back to business, my cramps miraculously resolved. Back on land, Vicki had managed to divert Lesley’s crisis too with hot water bottles, snuggly blankets, choccie bikkies and a nice lie down.

But at Champion of Champions it doesn’t pay to get too comfortable. Seconds out, round two, ding ding. That was a short pit stop. And although not as far as the first event, at three miles the next one was the running equivalent to a half marathon. No mean feat. Still, it felt good to be cracking out the miles again and without those hideous cramps this swim was far more enjoyable than the first. Physically harder but mentally better and there was at last a creeping hope that I might actually finish the series. And that made me smile. Wearing his favourite swim cap I could hear Tony shouting words of encouragement right into my ear. And that made me smile more. Lesley lapped me and it was good to see her and to know that she too was coping better.

Leaving the water with just one mile, I was ecstatic. But only for a minute. I made the fateful mistake of lying down. Knackered. Could I get up again? No Sir! The announcement was made that we would enter the water for the final time in 15 minutes. Fifteen minutes? Are you kidding me? I’d only just got out and was FREEZING. I needed a good talking to and a handful of man-up pills. I don’t think any of us had a long enough a break for our core temperature to have returned to normal. Many shivered and shook on their way into the water. But the buzz was everywhere. ONE MILE TO GO J Some swimmers ‘whoop whooped’, some did that little Mexican ‘rrrrr-ee-ba’ noise and some even beat their chests like gorillas, making man noises whether they had the tackle or not. Like coiled springs we waited for the signal to go, and when it came so did all our Christmases. All at once. Two laps, just two laps and it’s over. Swimming was hard work, my muscles had all seized up, the sea became treacle, but on we went and it was over in the blinking of an eye. That day, a record number of participants touched in to complete the series.
There is a certain camaraderie within the open water swimming community. A silent bond that knows no ego. There could be no Champion of Champions without the Champions themselves. And every single swimmer was worthy of that title whether it’s the last man home, little Miss Average or Mr Hot Pursuit. Let’s not forget the organisers and our support crews too, on land and at sea. We simply could not go ahead without them.
The day ended with the usual awards ceremony where each and every competitor was applauded, cheesy grins spreading from cheek to cheek for individual photographs to commemorate their success. Massive well-done to everyone taking part. And to the winners and runners-up, you truly are in a league of your own. It was an absolute privilege to swim with you.
If endurance swimming is your thing, if your mind-set permits you to keep going whatever happens then maybe we will see you next year for the 2015 Championships. If you can’t wait that long then go ahead and check out the upcoming events on the BLDSA website. You will be more than welcome.
Happy swimming one and all. 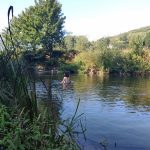