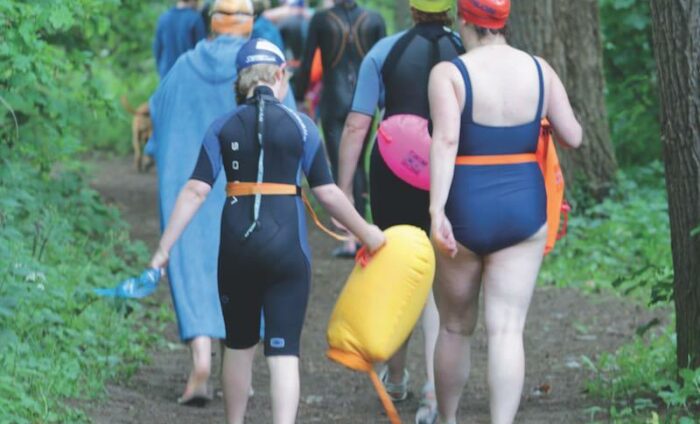 It started, as these things often do, with a discussion through Facebook followed by an arrangement to meet a bunch of strangers in a car park. It’s the type of thing we tell our children never to do but we make exceptions for ourselves. It was easy to spot the swimmers. They were already in various stages of undress and inflating their tow floats. The sky was heavily overcast and rain imminent yet the mood was jovial. I introduced myself and was warmly welcomed, along with a couple of other nervous first timers, who were quietly reassured.

Discussion quickly turned to the essentials: what was the water temperature (measured at 19 degrees but possibly 17 “in the middle”!) and what were the swimming options? Dianne Parrish, #ChesterFrosties’ founder, suggested splitting into three groups. The first would swim from the small sandy beach near the car park and stay next to the start, the second would walk around 500m upstream and swim back while the third would continue an additional 500m to make a 1km downriver swim. She reminded everyone that it was a free-to-join informal swim group and that everyone was responsible for their own safety.

The car park in question was at Eccleston Ferry, where a chain ferry used to cross the River Dee, and is a favourite meeting spot for #ChesterFrosties, although they have several others. The Dee originates in North Wales where it tumbles off the mountains in a series of rapids and falls beloved by kayakers. By the time it reaches the outskirts of Chester it has mellowed to gentle flow, drifting between tree-lined banks and peaceful countryside. However, a degree of caution with the current is required as at certain times the incoming tide overtops the weir in Chester and reverses the direction of flow at Eccleston.

We looked an odd sight, strolling along the riverside path

I set off with the 1km swimmers. We looked an odd sight, strolling along the riverside path, partially changed for swimming, some already wearing their cap and goggles. To our right lay the impressive grounds of Eaton Hall, the country residence of the Duke of Westminster, while the river on our left was mostly obscured by trees and bushes, leaving me to wonder where and how we would actually get in.

We eventually came to a spot with a small gap in the undergrowth, stopped and made our final preparations to swim. Dianne encourages all swimmers to wear brightly coloured caps and use tow floats, and all did. I stuffed my flip flops, shorts, towel and t-shirt into a tow float, put on my new bright orange #Chesterfrosties cap, and slithered ungracefully down the bank on my bottom into ankle deep water as instructed. I then took two steps forward and the river bed fell away suddenly. I was in.

The water was dark and earthy, but clear enough to see the swimmers next to you. We began drifting with the current as people identified who they might swim with. About four swimmers shot off but no one else was in a hurry. We breaststroked and chatted a while before breaking into a lazy front crawl. Apart from a handful of kayakers who passed us heading upstream we had the river to ourselves. I overheard one of the regulars passing on a few tips to another swimmer who was there for the first time. With the gentle push from the current, the kilometre was over much too soon, so I reversed direction and swam back upstream for a while. The swimmers towards the back were in no hurry to finish either. Even after I’d got out and dressed I could still hear their voices and laughter coming from the water.

How did you get started in outdoor swimming?
On 1 January 2013, I signed up to swim a mile in the Great North Swim, which I completed (in a wetsuit of course) in June that year. Then, in July, I did the Great Manchester Swim and because the water was so warm we were allowed to ditch the wetsuit. And that was it. The sense of freedom was amazing!

What inspired you to start #ChesterFrosties?
I was embarking on my first winter of skins swimming in 2013 and needed to build up a support network of swimmers and shore watch. I posted my first #Chesterfrosties swim meet tweet in October 2013 and started the Facebook group in December. There are now people in the group of all ages, abilities, goals, interests and personalities, so they find other people on the same work shift pattern, school run, holiday locations, and on the same wavelength!

Where does the name come from?
The name Chester Frosties was inspired by Barry Johnston and his tales of a group of hardy people in Ireland called the Skerries Frosties who swim all year round, which is also what we do.

Have you had any problems with authorities or people preventing you from swimming?
Sometimes fishing people don’t like us swimming but we try to swim past wide, quietly, with minimal disruption. However, it’s a long time since that has happened because we are finding more and more people look on with interest to join us!

If you would like us to swim with your club, email editor@outdoorswimmer.com

Winter swimming – all your questions answered

Swimmers to raise funds for mental health by baring all

“Everything is a more difficult than I imagined.”