Watching the men’s marathon swim at the Tokyo Olympics, I wondered what was going through the minds of the swimmers at different stages of the race.

Right from the beginning, Florian Wellbrock struck out on his own. After the first few minutes, he was already several metres clear. Was this going to be a replay of Rio 2016, when Jarrod Poort raced off the front of the pack and led for a significant portion of the race? Poort was eventually reeled back in by the chasing pack and finished 21st. Could the swimmers afford to relax, as they had then, or did they need to chase immediately? They all knew the outcome from Rio.

Alarm bells would have been ringing. Wellbrock had demonstrated his form the previous week with a bronze medal in the 1500m in the pool, in a time of 14:40.91, just a second behind Robert Finke, who had come from behind with a perfectly timed sprint finish. Unlike Rio, where conditions had been rough, the water in Tokyo Bay had barely a ripple – ideal conditions for someone with Wellbrock’s beautifully smooth swimming style. Plus, Wellbrock is the current world champion.

After the 1500m, where Wellbrock was overtaken in the final stages, he may have been thinking he might not have the fastest finish of the open water contenders, so his best chance would be to avoid a final sprint. Given that most elite level marathon swims end in a bunch sprint, that would be a big ask. Swimming away from the world’s top marathon swimmers, even if you’re faster in the pool, is no easy thing given the benefits of drafting and swimming in a pack. Yet Wellbrock was doing it.

In second position in the early stages was Wellbrock’s teammate and compatriot, Rob Muffels. If anyone would be familiar with Wellbrock’s race plan, surely it would be Muffels. But Muffels seemed to be content to let the gap grow. Was this a deliberate ploy to allow Wellbrock to get away? Were they working as a team? Or was Wellbrock’s pace too fast? Muffels had won bronze in the 2019 world championships, just 2 seconds behind Wellbrock, and had beaten Wellbrock in the only FINA marathon swim that took place in 2020. As a medal contender in his own right, I find it unlikely that he deliberately let Wellbrock open a gap. Either he thought Wellbrock had gone out too fast or he wasn’t able to match the pace.

After 9 minutes, Wellbrock was 10 seconds ahead of the chasing pack – a big gap at this level. Oussama Mellouli, winner of the 2012 marathon swim in London (and now 37 years old) was 24 seconds back in 11th position, while defending Olympic champion Ferry Weertman as in 16th place, 27 seconds behind and Gregorio Paltrinieri, one of the pre-race favourites, was in 18th.

Onto the second lap, Wellbrock, having taken a leisurely drink at the feed station, was looking comfortable in the lead. Marc-Antoine Olivier, bronze medallist in Rio, and Kristof Rasovszky, the current 5km world champion, had broken away from the chase group and were trying to close the gap. This was a brave move from the pair, especially Olivier who was leading. It would require a mammoth effort to catch Wellbrock, and there was a chance they would pull the whole chase pack along with them and thereby undermine their own chances of medals. However, only Rasovszky could or chose to hold the pace.

Forty minutes in, it looked like the medals would be shared between Wellbrock, Olivier and Rasovszky, who were 20 seconds clear of the chasing pack. Rasovszky even took the lead for a short spell, could the three of them be working together to cement their lead?

Paltrinieri had other ideas. Despite falling ill with mononucleosis in June, he was reportedly determined to claim medals in both pool and open water. While unable to defend his 1500m title in the pool, he was 2nd in the 800m, but could he now catch the leading trio? His charge lasted several laps and, after Wellbrock’s, was perhaps the most impressive performance of the event. After the feed at 7km, Paltrinieri, along with Athanasios Kynigakis and Matan Roditi had formed a group of six with Wellbrock, Rasovsky and Olivier. Wellbrock still looked comfortable in front and even took time out during the feed to swim on his back and check out who was with him. Meanwhile, the rest of the field had stretched out in a long line, well behind, a reflection of the pace being set at the front.

Was Wellbrock worried had this stage? Was he paying the penalty for starting fast and leading from the front? His demeanour at the feed suggested he was firmly in control of the race and confident in his pacing. He piled on the pressure in the penultimate lap and again pulled away from the chasers. He wouldn’t be caught again. But an exciting battle was shaping up for the other medals. At 90 minutes, Paltrinieri had moved into second place with Rasovsky and Olivier on his toes. Roditi and Kynigakis were still there, although the latter was starting to fall off the back.

Onto the final lap, Rasovsky and Paltrinieri had exchanged places while dropping the others. Wellbrock by this stage must have felt secure in his victory, but Rasovsky would have felt Paltrinieri in his draft and would have known he’d have to dig deep to hold him off. Paltrinieri switched from left to right and back again, trying to find the best way to overtake. The pair were safely clear of 4th place but were probably so focused on each other and the sprint to the finish line that they didn’t know. I expect, in the back of their minds, was the possibility that another swimmer could overtake and claim a medal. Rasovsky successfully held off Paltrinieri and must have been relieved, having been part of the leading group throughout. Paltrinieri, I hope, will be delighted with his bronze after his massive effort to catch up.

I always enjoy watching the remaining swimmers finish. Even when the medals have gone, competitive swimmers seemingly can’t help racing the person next to them and most seem to find the energy for a sprint finish. The exception in this race was Olivier, finishing sixth, who barely managed to strike the overhead board. Having put in so much effort early on to close the gap to Wellbrock, and been in medal contention for much of the race, this was surely a disappointment. The challenge with open water races is that you have to take risks for a chance of a medal. Sometimes, like for Wellbrock, they pay off and it looks like tactical brilliance. He’s proven that a marathon swim can be won by leading from the beginning. When your tactics don’t work, it looks like you made poor decisions, like Poort in 2016. But you never know if a different set of decisions would have produced a better outcome.

Obviously, I have no idea what goes through the mind of an Olympian during a marathon swim. I’ve seen comments that it’s the most boring Olympic event to watch but I disagree. I found it fascinating and speculating on what those amazing swimmers were thinking just adds to the fun. Many of the competitors in Tokyo are young enough to keep swimming at an elite level for many years and I’m already looking forward to watching them race in Paris, at a more convenient time of day. 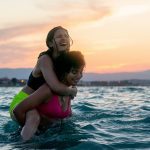 The Swimmers: official trailer is out now!

Birthday swimmer to be youngest at Great North Swim