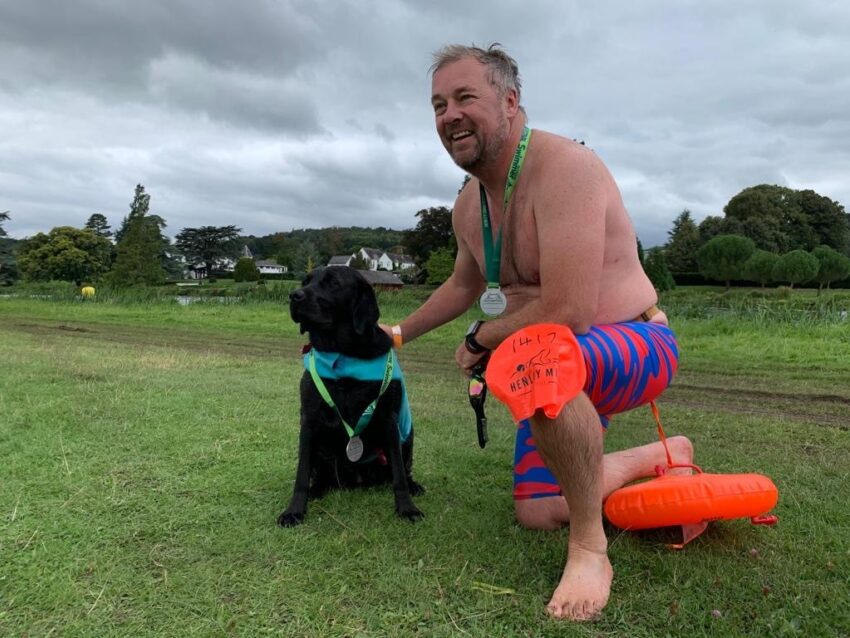 Swimming with your dog is a fun and interactive activity which can benefit you both. However, it is essential to make sure both you and your dog are physically capable of undertaking the swim that you are attempting. If you are considering swimming with your dog, here are some tips and recommendations to ensure they are safe at all times.

Some dogs are more accustomed to the water than others…

If you stayed around for the last wave of the Henley Swim Festival mile swim, you would have seen Bryan from SwimTayka swimming with his dog, a black labrador named Poppy. This is the first time that a dog has completed in the Henley Mile and the crowds certainly came out in force to cheer her on.

After gaining permission from the event organisers, knowing that not many swimmers would be in the water in the last wave, she was given the all-clear to join in.

Most dogs will paddle and slash in the water, and yet when Poppy was one year old, she would not venture anywhere near or even think about getting in the water. Until one day, when she was playing with another labrador, she followed them into the water, and that was it, she’s not looked back since. Every week Bryan takes her swimming at the Cotswold water park, all year round, you can see them both swimming around the 750-metre course at Lake 32. Poppy wears a buoyancy aid, mainly because if she gets into any difficulty she will not sink; also the useful handle on her back is perfect when you need to hold her back from racing into the water too quickly.

Bryan got into the Thames ready to start of the Henley Mile, and once Bryan was in, Poppy was let loose to make a rather ungraceful leap off the side and she was off.

Poppy loves the water and always swims right behind Bryan, at a steady 3 km/h pace, she follows close to Bryan’s feet. She knows how to slipstream and will quite often tap Bryan on his toes to edge him to swim a bit faster.

As they swam nearer to the main central area of the Festival, it was announced on the tannoy that Bryan and Poppy were coming past. This announcement caused lots of people to rush towards the water’s edge and they started cheering Poppy on (sorry Bryan, no one shouted for you). Every time Poppy heard her name shouted, she would swim to the bank of the river to see who was calling her. Finally, she got back on course and continued swimming behind Bryan but I’m quite sure she swam more than a mile because of that.

She finally finished the mile in just over 30 minutes, setting the dog swim record for the Henley Mile. When Bryan was given his medal at the end, he was thrilled to bits that Poppy was given one too although there is no record of how Poppy felt about receiving hers.

Bryan was very confident that Poppy would complete the course safely as she has been training and building up her swimming skills over the past two years. She started short 50m swims building up each week to swimming from 1km to 3km depending on how she is feeling.

It is quite amusing to see at the Cotswold lakes when Poppy, doing doggie paddle, swims past the triathletes in training, and swimmers have to stop for a moment to take note that a dog is swimming past them in the middle of the lake.