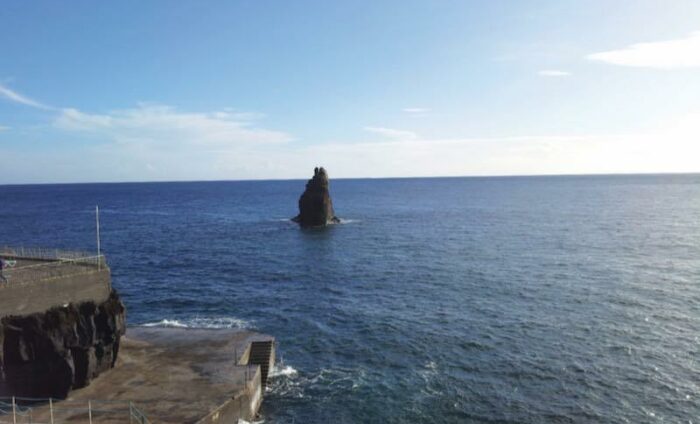 My favourite swimming spot, by happy coincidence, happens to be near where I live in the Lido area of Madeira island. The sea is calm and warm enough for us to enjoy swimming there all year round. The area is popular with tourists and also offers many other open-air sporting and leisure options: as well as running or cycling along the promenade you can also take part in outdoor spinning classes thanks to the all year-round sunny conditions that are normal at this latitude.

The power of the sea

Although the conditions are usually calm, one can never underestimate the power of the sea. My most immersive experience happened during a training session some seven or eight years ago. Even though it was winter I was still training in the ocean. That day saw probably the toughest weather conditions I have ever experienced since I started to swim here. The waves were about 4 to 5 metres high, which for the south part of the island is pretty impressive. After much pondering whether I should actually swim, I decided to give it a go.

What followed was 2km of pure pleasure

Due to a momentary lull in the waves crashing on the beach, entering the water was easy. What followed was 2km of pure pleasure. Alone, 260 metres offshore, I was immersed in the experience as the waves violently alternated between crests and valleys. There was no visibility, I didn’t know where I was or where I was going. The fact that I am writing these words now is probably only thanks to the accumulated experience of my numerous previous sea swimming sessions.

One of the highlights of that wonderfully dark and hazy day was swimming past viewpoints on the promenade where groups of people, mostly tourists, took snapshots of me in the water. Then came the challenge of exiting the water: I had to tread water for 43 minutes waiting for a break in the waves to clamber over the rocks and cement. This took longer than the swimming training session itself, but was worth every single minute. The experience finished with the satisfaction of an intense training session as well as the thrill of battling with the dark side of the ocean.
Weather conditions like this, however, are rare and most of the year we experience calm and safe swimming, with water temperatures never dropping below 18 degrees Celsius. Today (6 October), for example, it was 24 degrees and offshore, where I also adventure, it was over 25 degrees.

There are several organised swimming events and races to take part in, including the local open water championships, which consists of races in different spots all around Madeira island. There are also races off Porto Santo’s yellow sandy beach, an island that is part of Madeira archipelago, as well as the Madeira Island International Swim Marathon, which takes place at the end of October. And to get here there are daily non-stop flights from Heathrow or Gatwick – what are you waiting for?

Email your favourite wild swimming spot to: editor@outdoorswimmer.com with the subject ‘Wild Swimming’

When it comes to the use of wetsuits in swimming events, let swimmers decide for themselves