Back in September, Cameron Bellamy abandoned an attempt to swim around Barbados after 66km out of a total of 96km. Undaunted he said he “can’t wait to give it another crack.”

There were rumours he would make that second attempt as early as November but it wasn’t clear it would be possible given that weather conditions are usually worse in November than September. It also wouldn’t leave Cameron much time to recover from his first attempt and train and prepare for the second.

In fact, the conditions were worse but, starting on 11 November, Cameron went ahead anyway, and after swimming for almost 41 hours non-stop, he walked back up the beach to the point where he’d started. As for training, Cameron spent much of the time between his attempts on the Gold Coast in Australia swimming for up to nine hours a day.

With a core support crew of around 30 volunteers and paramedics and an entourage of eight boats, Cameron’s swim exemplified the need for brilliant team work and organisation to succeed on these epic challenges. And this was epic! According to the Marathon Swimming Federation there have only ever been three documented non-stop, unassisted sea swims longer than this. Conditions were tough throughout, especially around the North Coast of the island where he’d been forced to abandon on his first attempt. The swell here was so large Cameron was in danger of being swept onto the rocky cliffs that mark this exposed end of the island. To minimise the risk, the team led Cameron further out to sea, extending the swim even further.

Kristina Evelyn, who helped organise the swim (as well as the Barbados Open Water Festival, which took place just before), says that Cameron often had waves breaking over his head but he just kept plugging on.

Swimmers around the world followed his progress on social media and dedicated tracker and as the news spread that he was approaching the finish, a large crowd gathered to welcome him home.

Cameron uses his swimming abilities to raise funds and awareness for The Ubunye Challenge, a children’s charity that he created in 2012. He’s also a contender for the World Open Water Swimming Association Man of the Year Award. 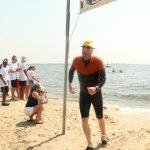