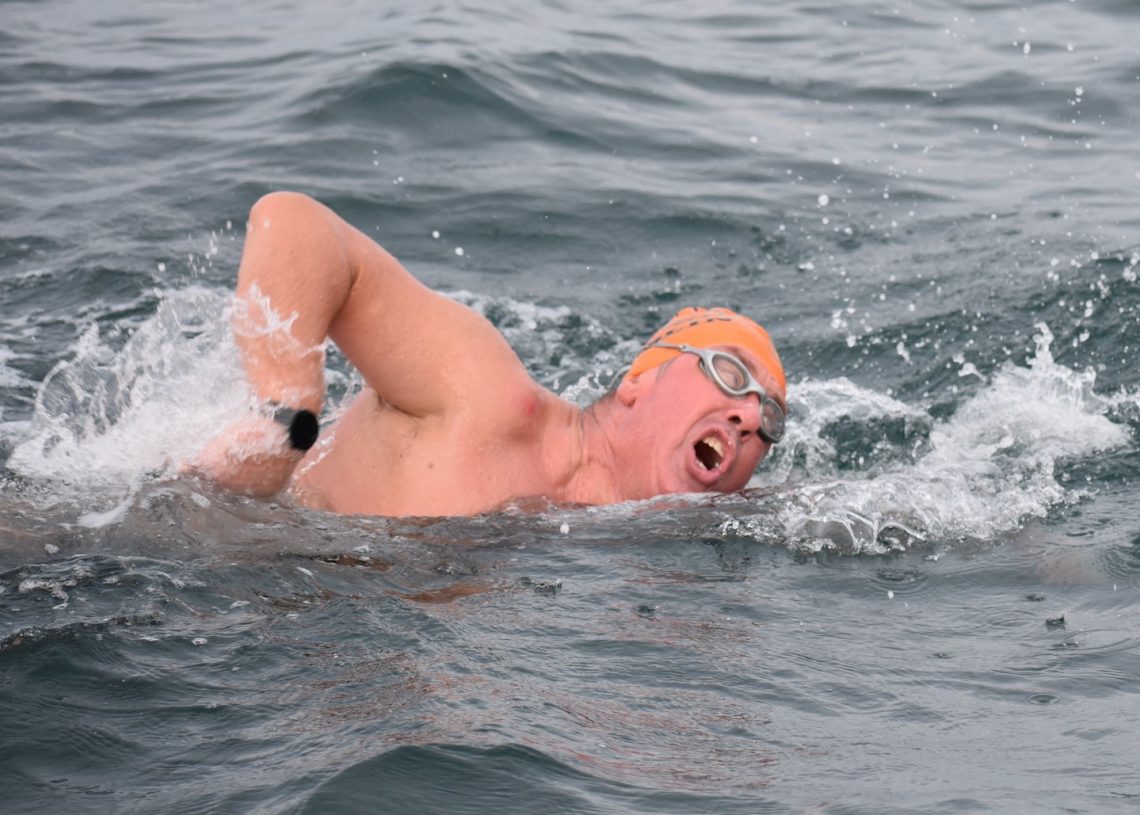 At 25 miles across, the Ilfracombe to Swansea crossing of the Bristol Channel is the longest swimming route Fergal has ever attempted. He completed the swim with a time of 15h, 35m and has raised €10,000 for the Irish Motor Neurone Disease Association.

Before commencing his challenge at Ilfracombe Pier, Fergal had an unusual way of preparing himself for the swim. “For all my long swims I draw the ‘Three of Hearts’ on my chest for the thee people who mean the most to me and inspire me: my wife Mags and sons Eoin and Conor.” On his back he also drew a signpost for Wales, “to keep me on track,” as Fergal puts it.

After a long swim through the night, Fergal brushed his hand past what he first thought to be plastic bags, but soon realised he was swimming alongside a pod of dolphins.

“For several minutes they darted under me in rows of three and four and sped past. When I looked at water level again I could see them jumping. They were so beautiful and graceful,” said Fergal.

While this wild encounter was a euphoric moment for Fergal, he soon found the water temperature an unexpected challenge.

“I hadn’t anticipated the cold. I was uncomfortable and my pace was slowing. By 6am I knew I couldn’t continue with the lowering body temperature,” Fergal said. “I knew a warm feed would help, and I had a coffee. I also knew that getting in the boat to end the swim would have seen me requiring sunscreen by the time I got back to Swansea. I wasn’t getting out – I kept going.”

The final stretch of his Bristol Channel swim was a punishing one for Fergal. “I had very little left. My crew mate John Daly offered me a final feed. I declined. I put my head down and charged for eight strokes and came back up for a look. I continued in this mode.”

At 3.35pm an exhausted Fergal reached Swansea, watched on by his wife Mags. “I called to her and told her I loved her,” said Fergal.

As a precaution Fergal was given a checkover at Swansea Hospital A&E after his swim, but was soon resting at home with tea and toast.

With the Bristol Channel swim under his belt, Fergal has completed the Original Triple Crown of Open Water Swimming (OTC) – the English Channel, North Channel and Bristol Channel.

How do I stop goggles from fogging?

How lockdown could make you a better swimmer