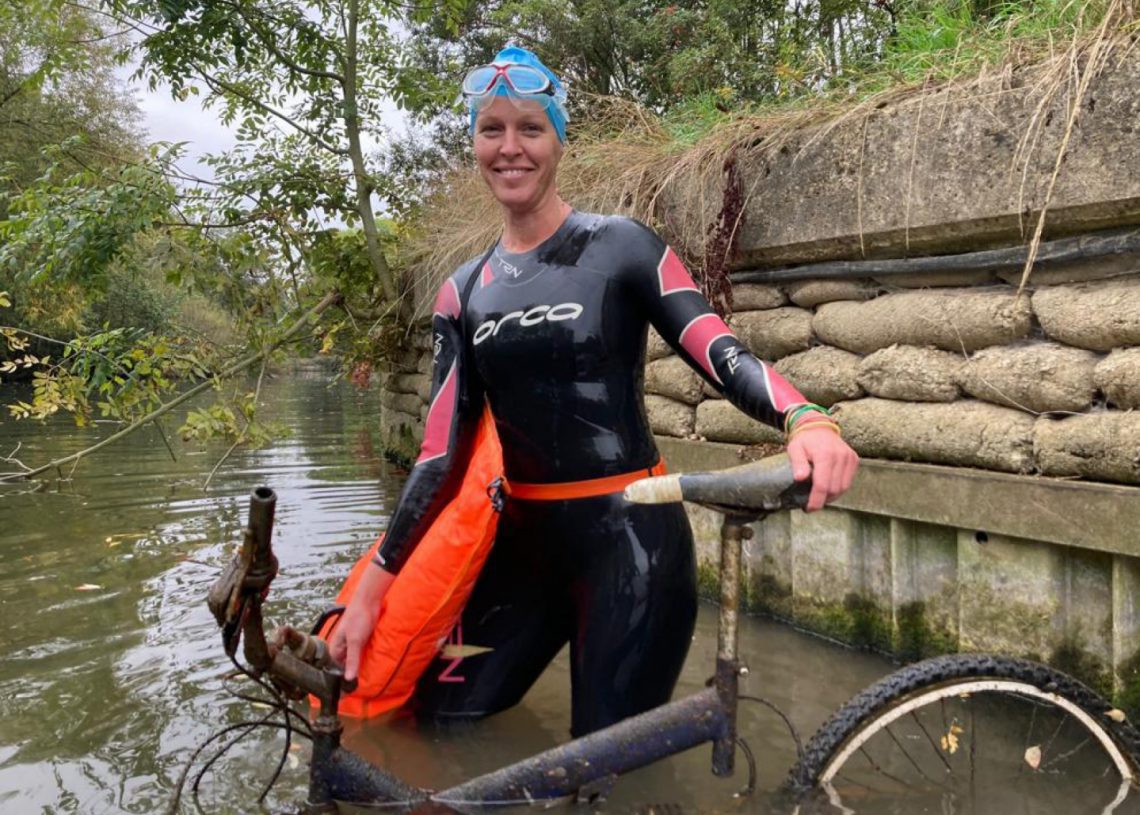 On 5 November, the Henley Mermaids will swim under Henley’s iconic bridge as they complete their 100+ mile swim along the River Thames.

The Henley Mermaids have spent the summer journeying from the swimmable source of the River Thames near Cricklade to their home ground of Henley-upon-Thames.

Along the way, the women have met campaigners, anglers, lock keepers and rowers campaigning for a clean waterways. The Mermaids also fended off swans, had a close shave with rowers in Abingdon, scrambled over fallen trees in the Upper Thames and enjoyed many a pub lunch along the way.

“It has been magnificent to see the River Thames from its source – a small but powerful trickle by the road in Cricklade to the majestic river it becomes in Henley,” said Laura Reineke. “We are so lucky to have this spectacular natural resource on our doorstep. We must protect it.”

Susan Barry, who was attacked by a territorial swan near Lechlade, said: “Despite being savaged by swans and many freezing swims, it has been one of the highlights of my swimming life. Seeing the Thames from the point of view of a swimmer is so special. I would recommend it to anyone.”

Fiona Print, who devised the idea for the Thames swim said: “We’ve discovered hidden parts of the river that only the birds and fish ever get to see. Tiny bridges, right-angled turns, knee-deep water and fallen trees gave way to the dreaming spires of Oxford and the beauty of the stretches throughout South Oxfordshire. It’s been wonderful.”

The Henley Mermaids are campaigning for the Government to act on the ongoing sewage pollution crisis, which shows no sign of abating.

“It’s devastating and angering that Thames Water continues to dump raw sewage into the River Thames, in wet weather and dry, because of its ongoing failure to invest properly in sewerage infrastructure and because of the total failure of the regulators and Government to properly control the industry,” said Jo Robb.

“This situation is the direct result of decades of the failure of privatised water monopolies to invest in infrastructure and the failure of a defunded Environment Agency and OFWAT to hold them to account.”

However, the ongoing problem is far from being addressed. In October 2021, the Government voted out a House of Lords amendment to the Environment Bill, which would have imposed tougher targets on sewage pollution. MPs instead voted for measures that rivers campaigners say actually weaken the law.

Additionally, clean water and nature targets announced this year have been criticised for lacking ambition – in some cases, discharging raw sewage into water courses will be legal until 2050.

“This has to stop!” said Laura. “The water companies have to start investing in the infrastructure so this won’t keep happening. The more houses that are built, the worse it will get. The system can’t cope with the existing waste.”

“The Environment Agency is on its knees, with not enough money to take the huge water companies to court. The water companies have so much money, a fine makes no difference. It’s time for us all to take responsibility, start using fish friendly products, ban the bleach and take care of our environment.”

“The Government is failing on nature and climate; it’s vital we hold them to account and speak up for our rivers,” agreed Jo.

Aside from the campaigning, the route has provided many memorable and personal moments. “The swim that was hugely special to me was the stretch through Appleford village and past St Peter and St Paul church, as that is where my brother lived when he was alive and where he is buried now,” said Laura.

“The upper, wilder reaches were also so beautiful,” said Laura. “We were completely in nature. We saw kingfishers, fish and birds; we picked blackberries as we swam past, and saw many immaculately kept lock keeper’s cottages, with gardens brimming with flowers.”

A protest event to finish

The swim culminates in a Swim Against Sewage protest event this Saturday 5 November on the Red Lion lawn, next to Henley Bridge.

Members of the public, as well as the swimming, rowing and paddle boarding communities, are invited to gather at the Red Lion lawn at 9am. The event will celebrate the successful completion of the Thames swim and to raise people’s collective voices against river pollution.

There will be refreshments on the bank, a line-up of speakers, plus a chance to talk to ocean and river activists.

A collective swim (Mermaids and members of the Henley Open Water Swimming Club only) starts at 9am on the Red Lion Lawns, next to Henley Bridge, this Saturday 5 November. Speakers and refreshments start from 9.30am. Residents are warmly invited to join the Mermaids to make their voices heard. Costumes, placards and musical instruments all encouraged! Find out more about the Henley Mermaids. Read more outdoor swimming headlines via our news page.

What strength exercises do you recommend for a delicate shoulder?