Cindy Nicholas, a record-breaking Canadian marathon swimmer and one of the greatest English Channel swimmers, has passed away at the age of 58. She died on Thursday 19 May from liver failure following liver cancer.

Nicholas crossed the Channel 19 times, including five two-way crossings (and two in one year). In 1982 her double crossing in 19 hours 55 minutes set a new record for both men and women and broke the previous record by 10 hours.

Her first major swim was crossing Lake Ontario in a record time of 15 hours 10 minutes aged just 16. She was inducted into the International Swimming Hall of Fame in 1993.

Outside her swimming career, Nicholas was a lawyer and served as a Member of the Provincial Parliament of Ontario. 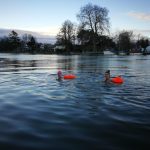