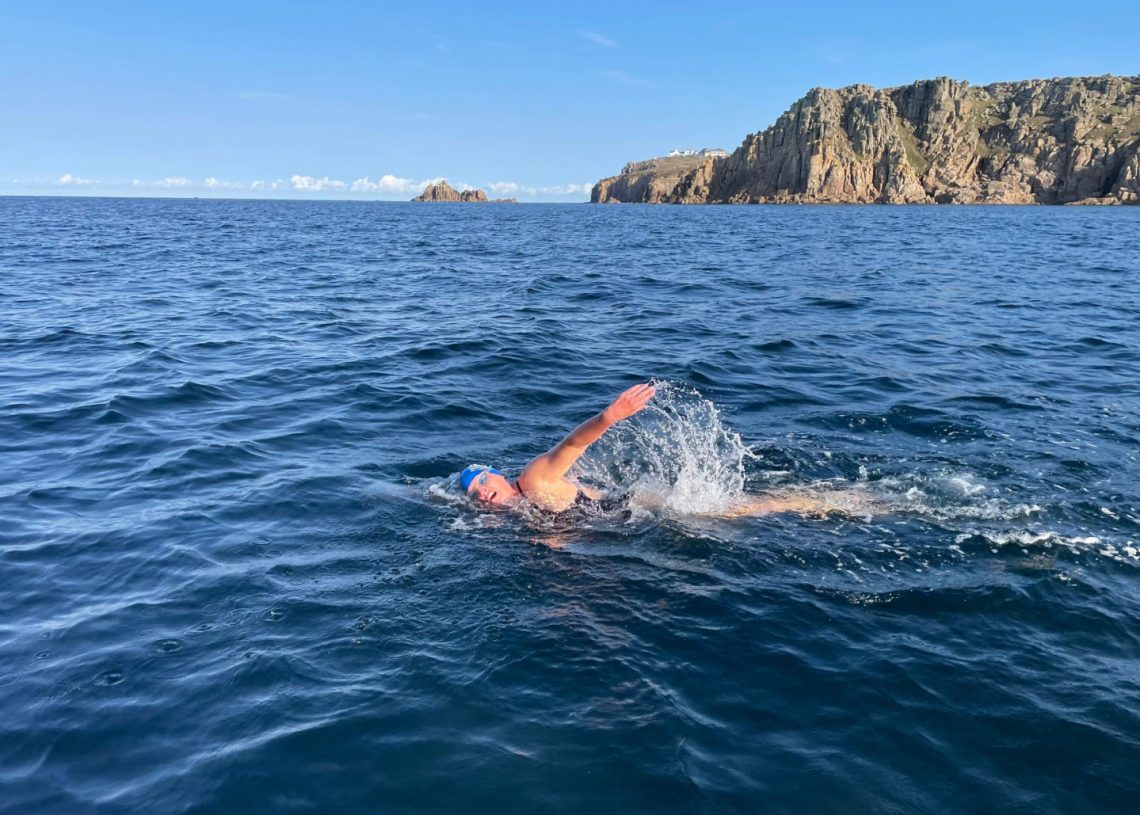 On 19 September, Plymouth Open Water Swimmers swam from Cornwall to the Isles of Scilly and smashed the current record with an unofficial time of 13 hours, 17 minutes and 19 seconds.

Neil Brinkworth and fellow relay swimmers, Amanda Holland, Mike Goodman, Lindsey Walke, Griz Bear and Denise Ward from Plymouth Open Water Swimmers were following in the wake of the Six Scilly Swimmers, who successfully swam from Land’s End to the Isles of Scilly in September 2021. Six Scilly Swimmers pioneered the way by becoming the first non-wetsuit and officially ratified team to complete the swim in time of 17 hours, 59 minutes and 29 seconds.

If the new time by ​​Plymouth Open Water Swimmers is accepted by the British Long Distance Swimming Association (BLDSA) and Guinness World Records, the relay team will have beaten the previous world record holder by 4 hours, 42 minutes and 1 second.

“The conditions on the day were unreal; they were the conditions every Channel swimmer dreams of,” Neil told us. “A slight breeze and a clear silky blue sea, with hardly any waves or swell.”

As the day drew on, the conditions only got better and the relay team were treated to an incredible sunset over the Isles of Scilly. “Our boat pilot Mark on Celtic Fox said that the conditions on the day were ‘once in a year’, and we were extremely lucky. We also had one of the best tides of the year, too.”

Neil says one of the unexpected challenges of his swim was self-inflicted. “With big swims like this, there is always a dilemma of what you are going to eat. There wasn’t any shortage of food onboard; we had everything from homemade flapjacks to huge tubs of pasta. Good job really – as the boat left the harbour and headed out to sea, I realised I had left my cool bag in the back of the car! I especially missed the homemade sausage rolls. I wasn’t popular, but my team didn’t let me go hungry!”

All of the swimmers in the relay train several times a week, either in the pool or the sea. But due to work and family commitments, it was difficult for everyone to get together before the event. The relay was the first time everyone swam together.

Neil says there was plenty of laughter on the boat throughout the day, and the team gelled amazingly well. But the most memorable moments were provided by the ocean life they encountered, including a very special close encounter.

“Throughout the day, we were escorted by dolphins from afar. During Lindsey Walke’s second rotation, we spotted two dolphins in the distance that were making a beeline for our boat. It was amazing watching them jump out of the water, heading in our direction. As they got closer they darted under the boat and came up beside Lindsey whilst she was swimming. When Lindsey got back on the boat, she said that they were nudging her as they swam beside her.”

Dolphins also accompanied fellow swimmer, Jacob Roberts. They leapt and played just 10 feet in front of Jacob prior to him landing the swim on the Isles of Scilly. “It was as if they came to join in the celebrations,” says Neil.

“When Jacob Roberts landed the swim, there was a lot of shouting and cheering and we were eager to know how long it took us to complete the swim. When the observers said that the swim had taken us 13 hours, 17 minutes and 19 seconds, there were even more celebrations as we realised we had broken the record set 12 months previously by the Six Scilly Swimmers. Once Jacob was back on board, there were more hugs and cheers with the Prosecco and rum being broken out.”

The team’s two BLSDA observers, Andrew Butler and Fred Buckingham, are currently pulling together the supporting documentation that will be submitted for verification. Once the swim has been verified by the BLDSA, the relay team will apply to have the record recognised by Guinness World Records.

Sign up to our free weekly newsletter to read more incredible swimming stories.