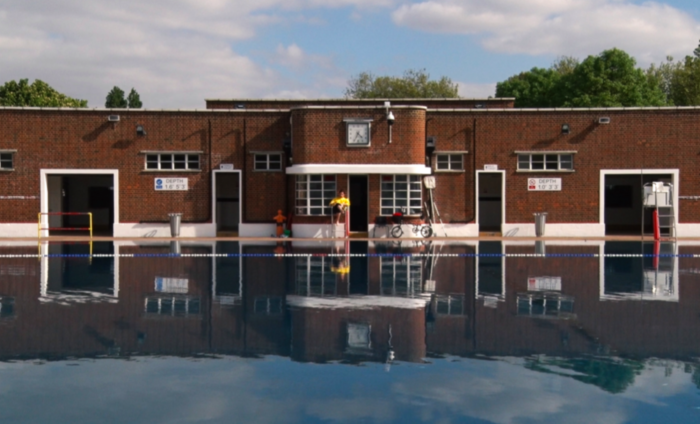 Hampstead Heath’s Lido is an oasis in an urban metropolis to many Londoners. The pool, normally open 365 days a year, has been temporarily shut down, along with the rest of London. When access to places such as these is denied, its presence in the memory becomes more charged. As such, the short film LIDO serves as a powerful reminder of a much-loved iconic public space, where Londoners of all backgrounds normally unite.

The immersive, sensory film offers a meditation on time, architecture and the human form. We are drawn into the space, seeing the lifeguards and swimmers going about their daily activities; the simplicity of everyday life takes centre stage. LIDO invokes ‘Kinesthetic Empathy’ – a concept which describes ‘the ability to experience empathy merely by observing the movements of another human being’. The film gives us a flashback to London as it cycles through each season, subtly suggesting that this too shall pass.

As life for many Londoners slows down, we should be taking time to consider the world as it has been and to foster hope for its future. The film can help its viewers find resilience by reconstructing the Lido in the imagination.