Again this week I had planned to write something else but open water swimming has a habit of providing the unexpected. I thought I’d write something about feeling the fear and doing it anyway (shamelessly stealing from a book title). However, this is more about feeling the fear and paying heed to what it’s telling you.
Last Saturday I swam the length of Windermere. This was a big step up in distance and water temperature from anything I had done before, and I was nervous – but not nervous enough.
In brief, I finished the swim but don’t remember the end nor what happened immediately after. I was unable to lift myself out of the water and was obviously very cold and only semi-conscious. It took a visit to hospital to restore me. But what went wrong, and what are the lessons?
You sometimes hear swimmers saying things like: “keep going until you hit the other end or they pull you out.” This is supposed to steel your resolve to prevent you giving up early on a swim due to cold or fatigue. For marathon swimming the saying is that it’s only 20 percent physical – the rest is mental. The implication is that will-power can get you through anything.
I don’t subscribe to this view and I’d like to think I’d have the sense to stop swimming if I was dangerously cold or tired. However stubborn you are, your body is still subject to the laws of physics and biology. I certainly had no intention of swimming until I collapsed but my swim at Windermere this weekend showed me it can be hard to know where your limits are and that you can unintentionally – and quite easily – push beyond them.
The first part of the swim went smoothly. I noted the cold but wasn’t suffering from it. I stayed focused on the swimming and enjoyed the surroundings. Somewhere between three and four hours I started to feel colder, but I expected to. I was in 15 degree water. My feet were a bit numb but my hands were fine. I remember being very aware of where I was and what I was doing. I was feeding every 30 minutes and not as tired as I expected to be so I didn’t see any reason not to continue. I’ve heard other people talk of suffering and swims bringing them to tears. I didn’t feel anything like that so stopping didn’t even occur to me. After that, my memory becomes a bit hazy but, according to my support crew, I was still swimming strongly and not showing any typical signs of hypothermia. I can then remember being somewhere close to the finish and being urged on, and that’s it, until some time later.
Somehow, on some kind of autopilot, I swam across the finish line. From there – so I’ve been told – I was bundled into the first aid tent, dressed, wrapped in warm blankets and force-fed hot, sugared tea. The tea is the only bit of that I remember. I was then put in an ambulance and on a glucose drip before being driven to hospital where, luckily, I recovered fast and was able to return in time for the presentations.
What happened, it seems, is that as well as being hypothermic I was also hypoglycaemic. Despite regular feeds I’d depleted my glucose reserves to such an extent that I was unable to shiver and generate any heat. Once the drip was in place, blood sugar levels came up quickly, shivering started and I was able to warm up.

I’m not proud of this. In fact, I’m slightly ashamed. I caused a lot of people – especially my family – a lot of worry and cost the NHS a four-figure sum. Hypothermia is sometimes treated as a bit of a joke – something you can laugh off with a bit of bravado, a mug of hot chocolate and some positive thinking – but it really isn’t. It’s not a rite of passage for long distance swimmers but a serious condition with potentially fatal consequences.
I haven’t become an overnight expert on hypothermia but here are some of the things my experience has taught me:

The experience hasn’t put me off open water swimming but has given me lots to think about and possibly a few things to change, such as my nutrition.
Finally, I’d publicly like to thank the BLDSA and especially the safety team: the former for organising a great event and the latter for taking care of me so well.

What does outdoor swimming mean to you?

How to pack smarter for your swims 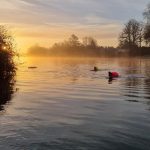 No one’s impressed by your abuse of swimmers