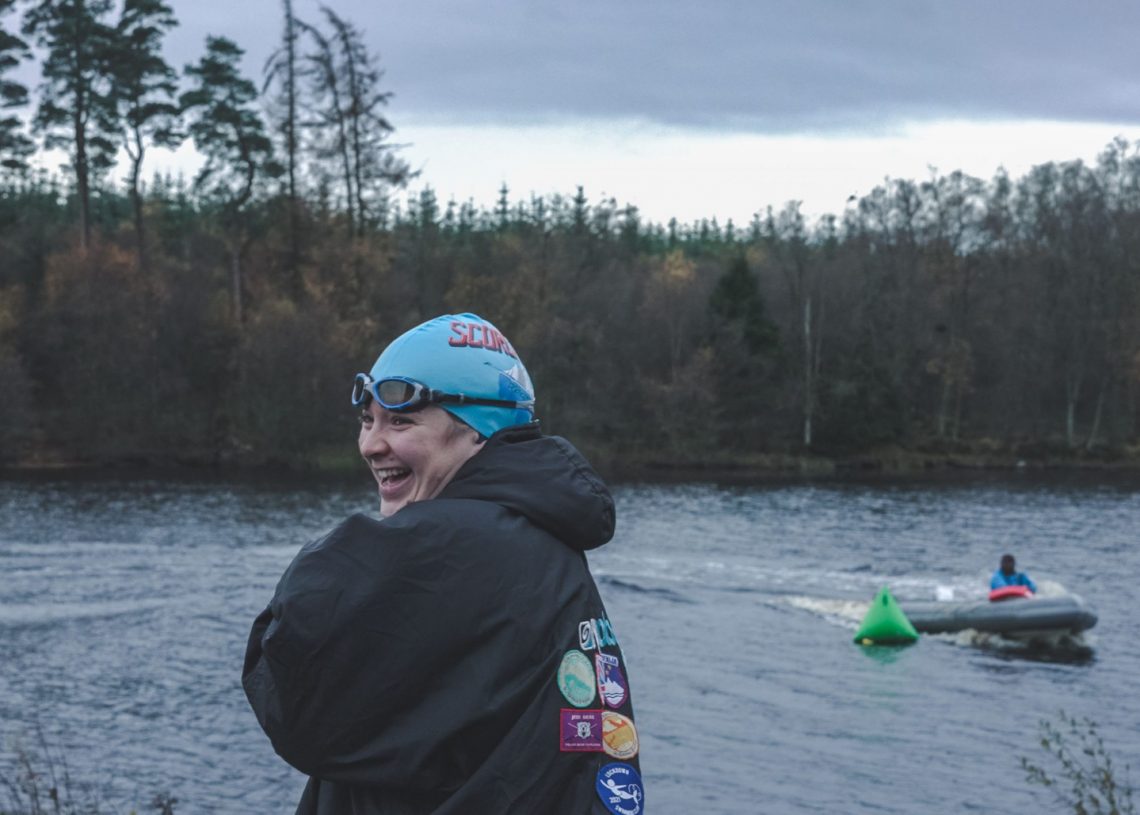 After a three-year delay Becca Harvey conquered an ice mile swim in Loch Insh, Scotland. A film has documented her difficult journey to success and premiered at Kendal Mountain Festival. In her own words, Becca shares her story, with photos by Rachel Sarah.

The same version of yourself never comes to the water twice. When my toes finally met the water in March this year, I didn’t believe it was happening. After three years of waiting for this moment, everything melted away; the expectation, the pressure and the agonising wait for my official attempt. Regardless of the outcome, I had finally got to the water’s edge. I couldn’t control anything anymore and just had to hope I’d brought the right mindset and body to complete this swim.

In that setting, you can’t help but think back to where it all started. Hearing whispers about an ‘ice mile’ in my first season pootling around Clevedon Marine Lake in a bobble hat in 2018. Even in those early swims I was tantalised by the concept of swimming a mile in water below five degrees, with no neoprene. At the time I was dipping to prove to myself that I wasn’t broken after struggling with a PTSD (Post Traumatic Stress Disorder) diagnosis. I wanted to prove to my body that it could still do hard things and from that idea, my pursuit for the ice mile began.

“In my mind, it wasn’t an ice mile, it was just swimming round some pedalos a few times”

The swim itself was special in so many ways. As I entered, a flock of geese pointed me in the direction of the water. Flanked by a rib and a trauma medic on a paddleboard, I knew it was time to go. In the run up to this swim I didn’t want to think about how far I needed to go. I had explicitly told everyone that it was indeed a ‘training swim’ and we were just going to see what happened. With this in mind, Alice and the team at Loch Insh, set out pedalos for me to swim around.

In my mind, it wasn’t an ice mile, it was just swimming round some pedalos a few times. On the day, I handed my safety over to my experienced team and all I had to do was keep my head down and swim. Usually on a swim I’d be checking in with my body: how am I feeling? Is it time to get out? But for my ice mile I didn’t want to know. If I got into trouble, it was down to my team to make the call. I knew I couldn’t be objective.

The water was 4.83 degrees and it was sunny. I could feel the warmth on my back and see the sun beams dancing around my arms as I slipped through the water. The only distraction that crept in was the brain freeze as little did I know, my swim hat was slipping from my head. A word of caution to all swimmers DO NOT WASH YOUR HAIR prior to an important swim! By the end of my mile I looked like a comedy gnome statue, and those wonderful finishing photos are tinged with a very visual lesson.

When I envisaged attempting an ice mile, I thought I had to be the peak version of myself. Three years ago I was in the gym, sometimes twice a day, and I had two incredible swim coaches to help improve efficiency. My goal was speed, to ensure I was in the water for the least amount of time possible. In actual fact, when it came to it, I wasn’t quick at all.

Three years of waiting for an attempt where life events had taken their toll, I knew I didn’t have another season of training in me. It’s not just a distance to train for, but there’s an uncertainty and unpredictability that accompanies it. It’s training year on year with the knowledge that your body of water may not reach the desired temperature, and the glaring reality that it just might not be on the cards. I was trying to harness the ‘ice mindset’ despite all that, absorbing the cold rather than fighting it.

My ice mile took 47 minutes 31 seconds and for that I was ratified for an ‘Extreme Ice Mile’, which in definition is a ‘higher risk swim’. To me that was just how long it took in the end; I was focused on being steady and consistent and everything else didn’t matter. Through accepting defeat in my pursuit for speed, I’d actually harnessed the power of my mind. The ability to persevere and realise that I CAN do hard things, may end up taking me a bit longer, but that only makes me more extreme.

Watch the official trailer for The Ice Mile

The past year of Becca’s ice mile training were documented by Rachel Sarah in a feature length documentary. ‘The Ice Mile’ premiered at Kendal Mountain Festival and some selective screenings will follow. To find out more follow @becca.harvs and @rachelsarahm on Instagram.

The Ice Mile will be showing at 7pm on Thursday 26 January 2023 at The Fire Station, Sunderland (tickets £11), followed by a chat hosted by Gilly McArthur with Becca Harvey, open water swimming coach Fenwick Ridley and filmmaker Rachel Sarah. A percentage of sales will be going to Beach Access North East. 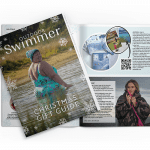 Join the We Remember Them Relay and support frontline workers